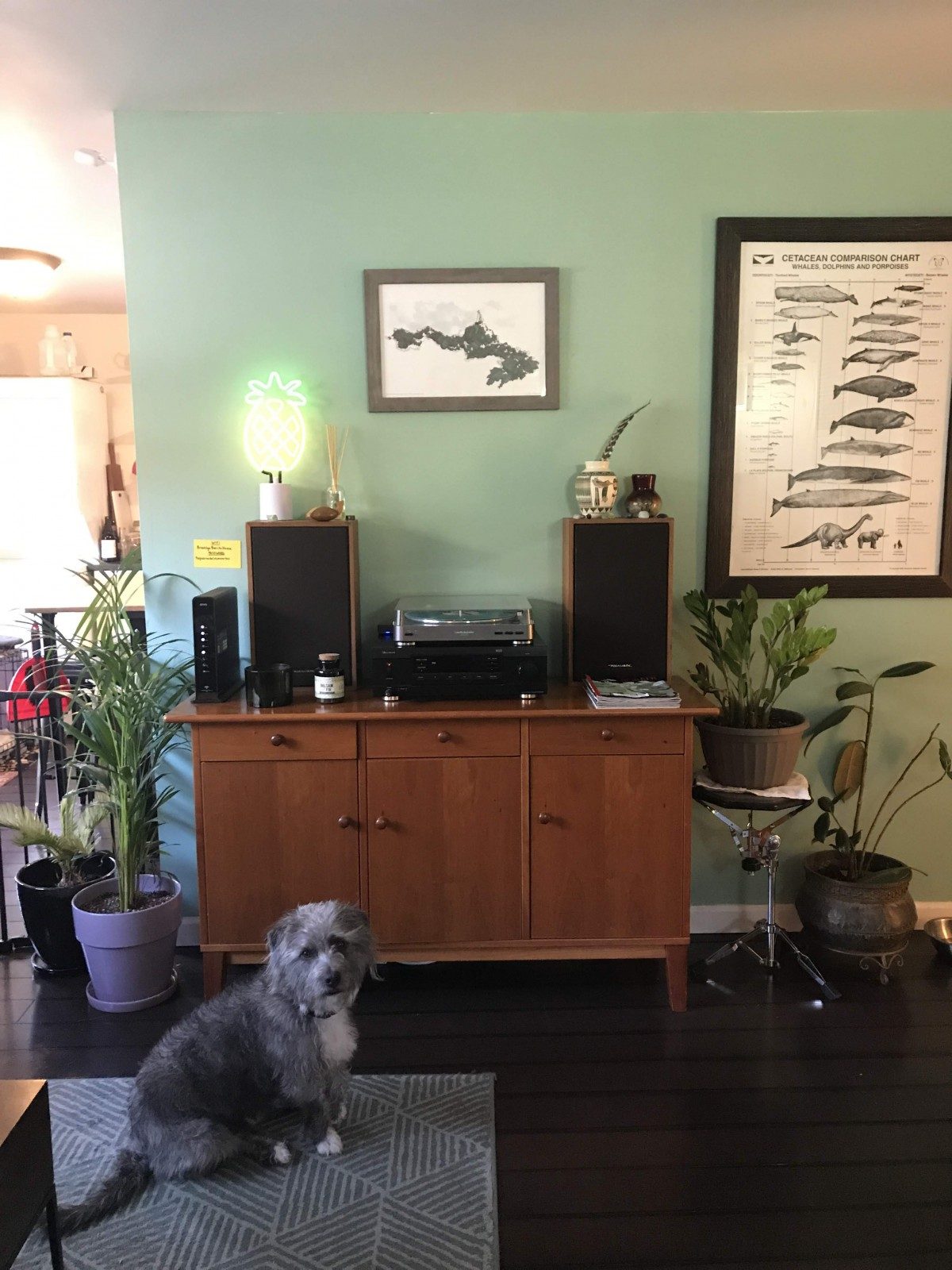 When former New Yorkers Erica Warren and Cici Harrison drove across the country and settled in the Pacific Northwest, they had a list of criteria for their new rental.

They’d need a parking space, a home office so Erica could work remotely and, of course, a yard so they could adopt a dog. And this rental couldn’t be too splashy, because a cross-country move is expensive enough.

All of this complicated their search in Portland’s tough rental market. Luckily the couple were able to stay locally with friends until they found the right rental. And their new home ticks all the boxes – while requiring some minor compromises to make it all work.

We chatted with Warren to hear how she and her wife navigated a cross-country move, including finding a home in a new city and making their new rental feel like home.

Where is your home, and how long have you lived there?
We’re in the Southeast, specifically the Richmond neighborhood. We moved there in March of 2017, and we’ve been there a year and a half.

How did you find your rental?
When we got here, we were staying with Marty and Tera, our friends who live here locally. The day after we arrived, there was the biggest snowstorm Portland had ever had in 30 years. That put a damper on our apartment searching, because we couldn’t drive our car or get anywhere. This place was actually the first one we saw, because it was in walking distance from Marty and Tera’s house.

We heard about it because Tera had sent an email around at her job asking if anyone had a lead on a rental. Someone else who worked with her had recently purchased a duplex and was looking for renters for the other side.

We walked over and saw it, and it was a very nice place. But it was the first place we looked at. We had no context for if it was a good deal or not. Of course, it seemed like a good deal to us, coming from New York. I was like, “It has a washer and dryer, it has a yard – I’ll pay any amount of money for that!”

So we didn’t say yes right away, and then we probably spent the next two or three weeks looking at places. We looked at about a dozen places all over the city. We saw all the different variations.

At some point we were almost ready to sign a lease on a 1 bedroom in a new apartment complex. It was, on paper, everything we were looking for. And Cici, out of nowhere, goes, “Why didn’t we want that first place that we looked at?” The one we were going to sign a lease for was 1 bedroom, and this was 2 bedrooms, and it was bigger, and the monthly rent was less. And we were like, “Oh, that was a much better place!” So we emailed the landlords to see if it was still available, and it was. 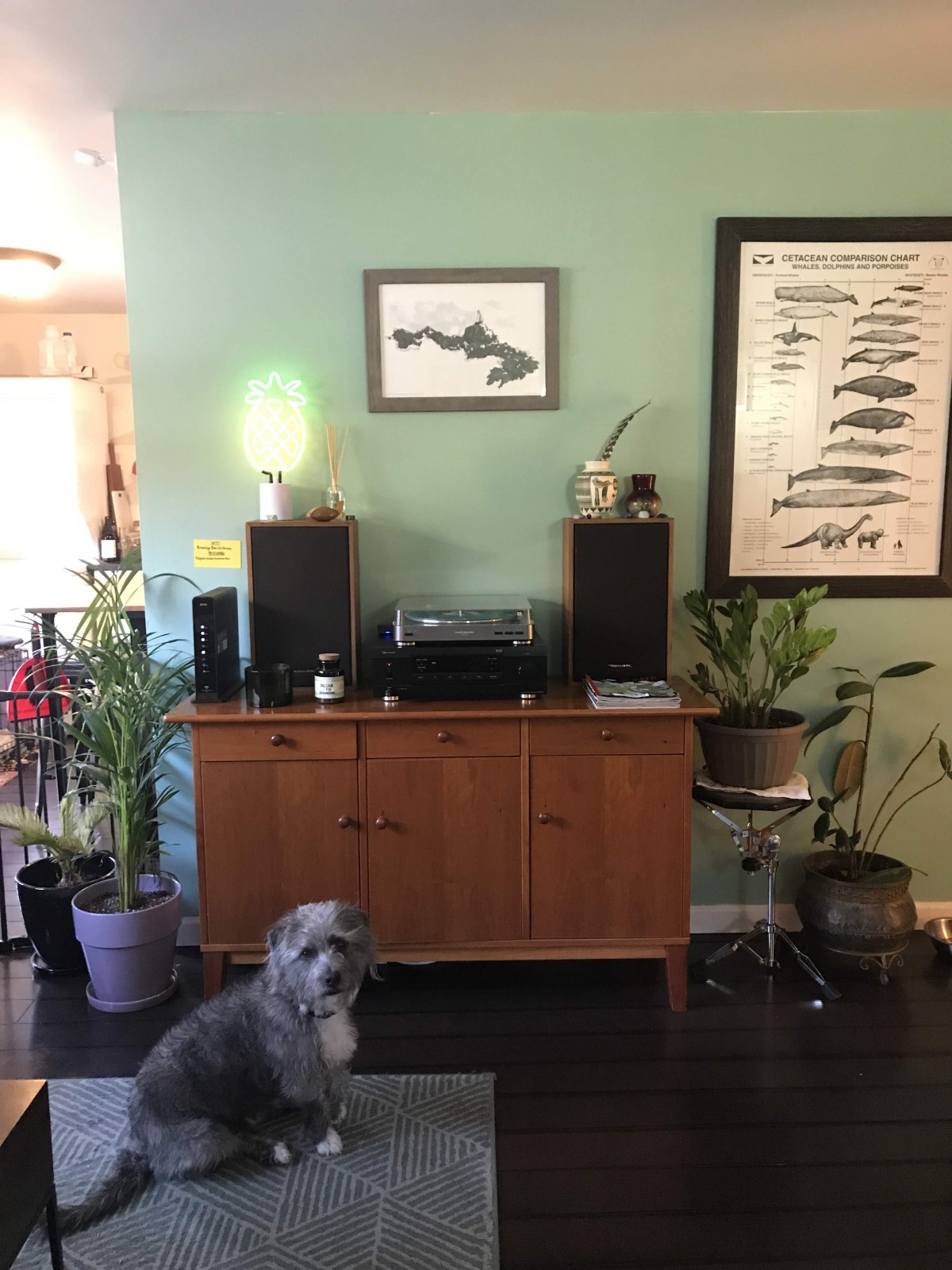 What price range were you looking for, and what did you end up paying?
We were looking in the $1,500-$1,700 per month range. This place ended up being right in the middle. It was $1,600 when we started the first year we were here, and it’s now $1,685. It seems like a pretty reasonable price for the neighborhood we’re in, because the rental market in Portland seems to be growing so fast.

Were there any surprise fees?
We paid first month’s rent and a security deposit. The only extra fee when we moved in – we had just adopted Billie, and they had a $25 monthly dog rent. Which they told us about beforehand, because we were very particular about wanting a building that would allow us to adopt a dog. We got her a month after we moved in. 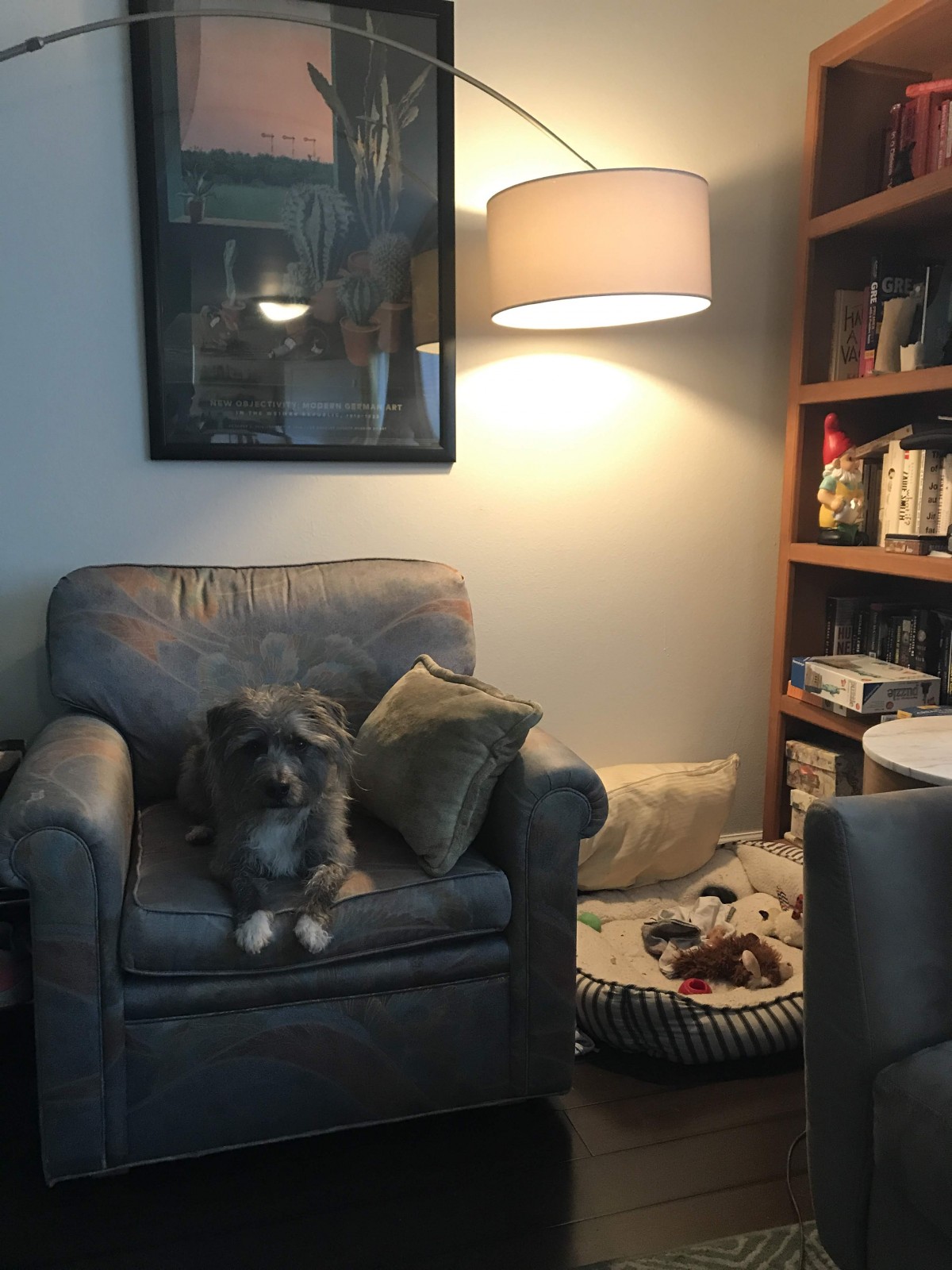 What was your cost of moving across the country?
We paid about $5,000 total for a full-service moving company, which is a lot of money. It was our biggest moving expense, but all we had to do was box up our things. They sent a whole team of people, packed our stuff into a storage cube, stored the cube for us, and then when we found a place, shipped it across the country. We didn’t have to do any of the logistics, and we didn’t have to do any of the carrying of things – we just had to pack a few boxes and unpack the boxes when we got here.

New York is notorious for small apartments. Is your Portland space bigger or smaller?
It’s slightly bigger, and I feel like it’s most noticeable in the kitchen. The kitchen that we have here is two or three times bigger than what we had in New York. I didn’t know how much I wanted a really nice kitchen, but now that I have one, I’m like yes, this is exactly where we needed the extra space!

We also have outdoor space, which makes a huge difference. It’s not huge – it’s more like a patio than a yard. We have a little grill, and we can sit out there on a nice day. Plus, it’s got a fence, so we can let our dog out. 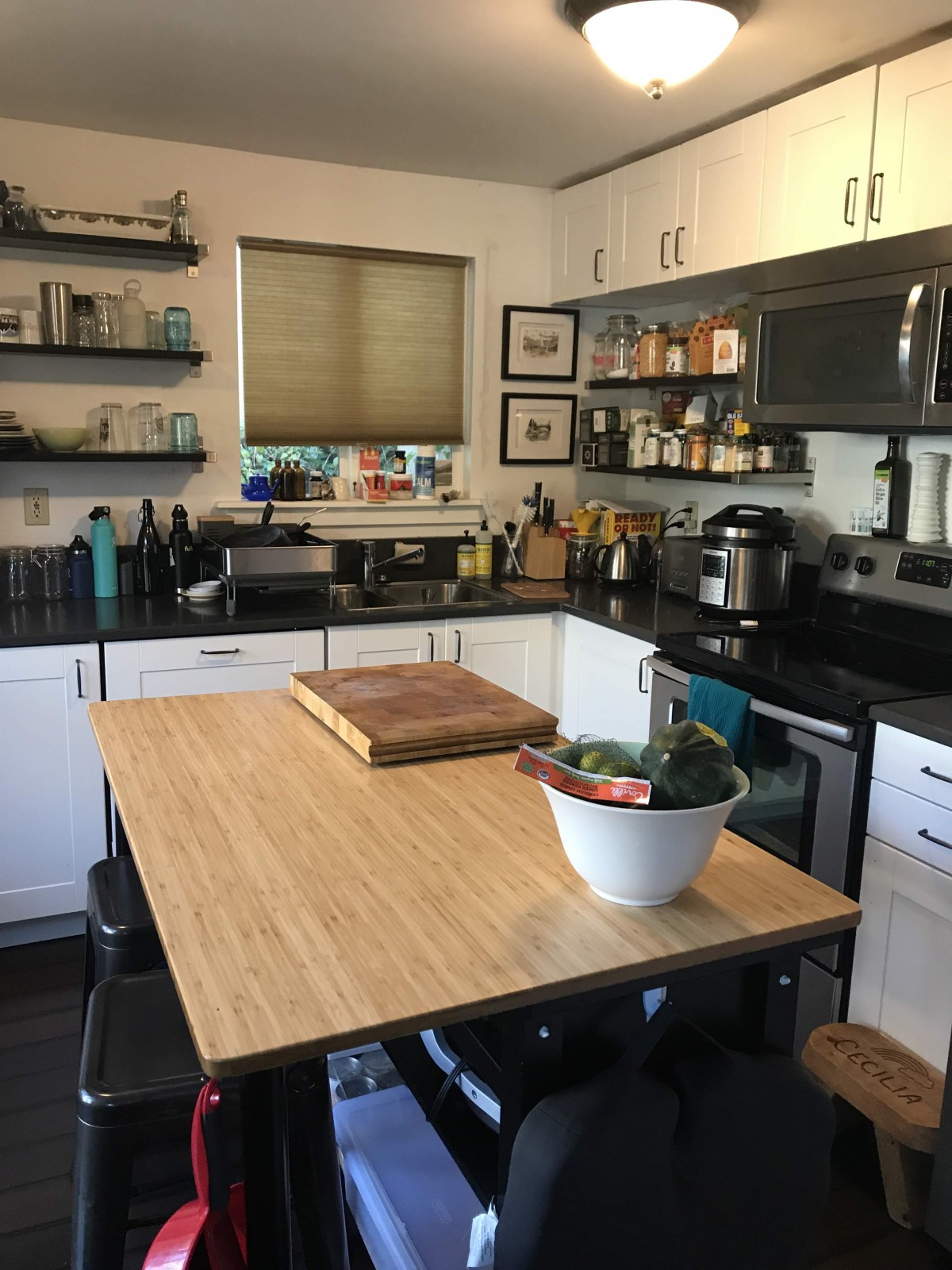 Did you have any challenges making the place functional?
Nothing major. It was built in the ’60s or ’70s, but the landlords had renovated our unit before we moved in, so the kitchen, bathroom and flooring were all brand new – you know, everything works and is nicely designed, so that helped.

I did a little bit of work in the yard, just because it was a little muddy, and it’s Portland, so it’s wet in the winter, and Billie likes to dig. I got some pebble stones to fill in some of the muddy areas. We got into some light container gardening, because we never had outdoor space in Brooklyn. So we have a little blueberry bush, some star jasmine and some other little things I’m trying not to kill.

What else have you done to make your rental feel like home?
We painted a couple accent walls, which our landlords were totally fine with. We have this wide picture window in the living room that faces the road, but because of that you can see right into our house. So we got a custom shade that you can pull up from the bottom or pull down from the top, just so that we can have privacy but also sunlight if we want. 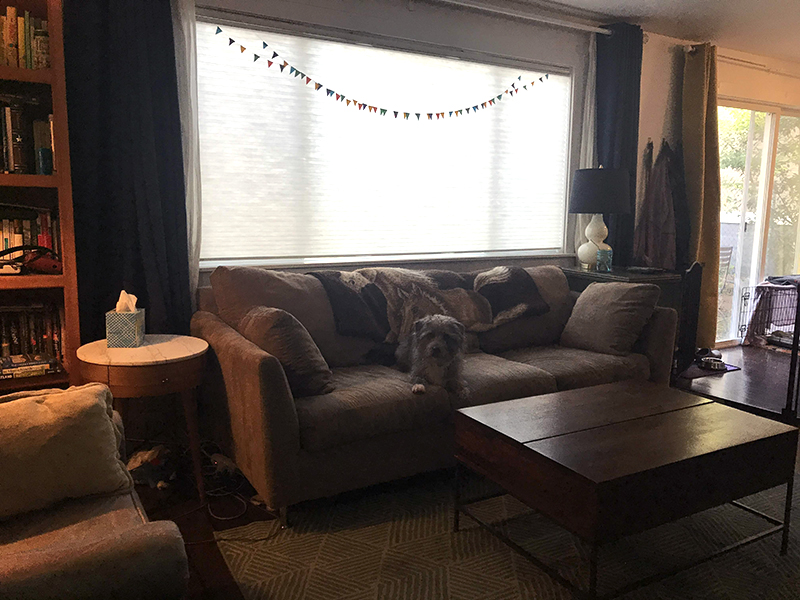 How long do you think you’ll stay?
I don’t know specifically. When we moved in, we talked about how we’d love to stay here until we’re in a position to buy a house. One day I’d like to own a house – a dining room would be nice at some point in my life. But where we’re at right now, this is the right amount of space, and it’s a really great neighborhood.

What do you want from your next place, other than a dining room?
A big fenced-in yard for Billie! Cici’s mom sent us an article about how the thing that’s finally getting millennials to buy houses is their dogs.

I’d also like a little bit more guest space so we could have people visit more frequently, because all of our family is on the East Coast.

And this is 100 percent because Cici has already claimed it – whatever house we buy has to have a basement so that she can play drums there. Number one is a yard for Billie, and number two is a basement for a drum kit and band practice. 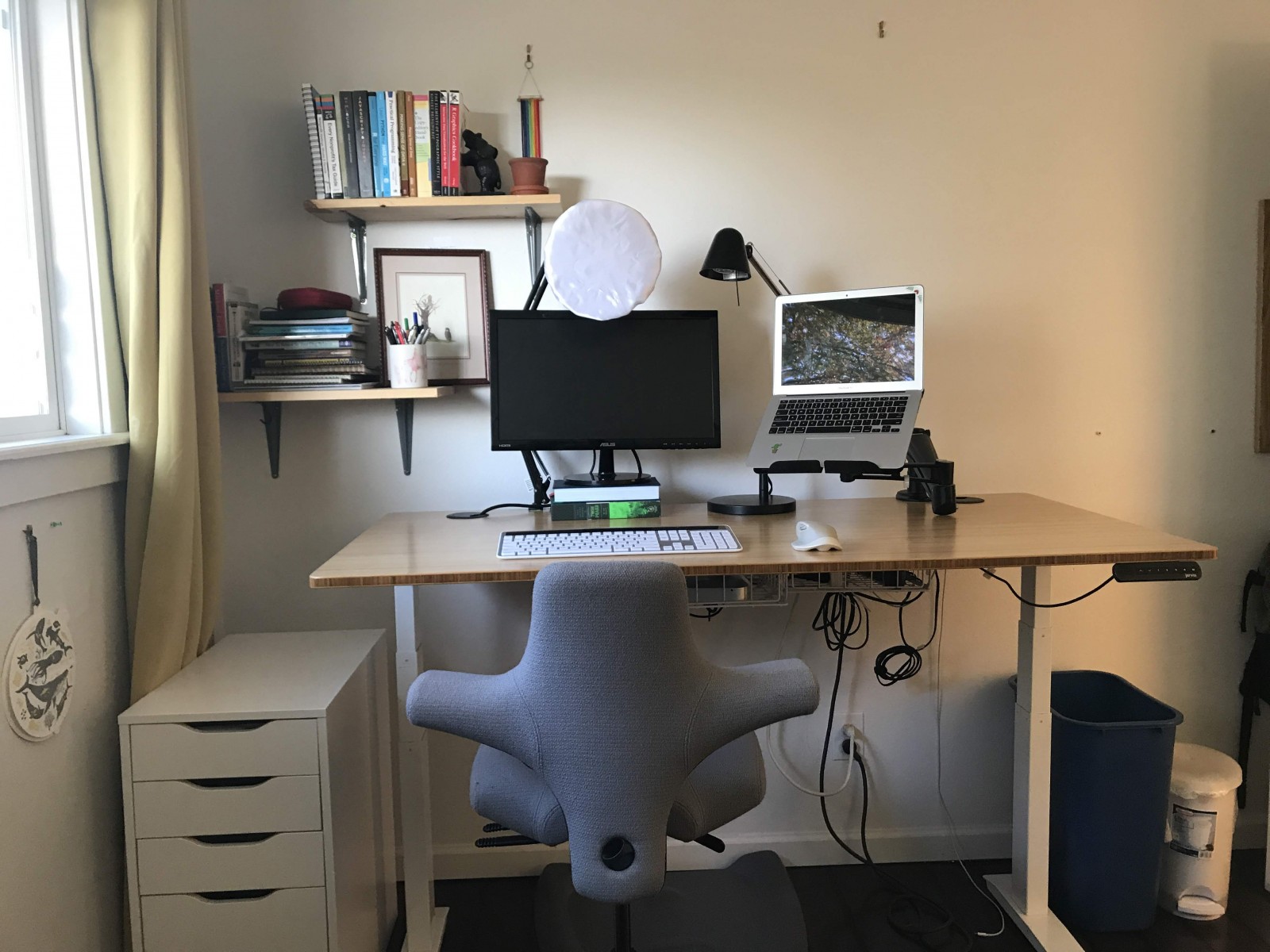 Erica’s tips for finding a rental in a new city

1. Look around to get a sense of the market

Look at as many places as possible. Because even if you don’t want that unit, it gives you a sense of the market. So when you do find a good deal, you know that you have a good deal.

2. Know where you’re willing to compromise

If you have enough money that you don’t have to make sacrifices in renting, you probably don’t need to be renting. So everything’s a trade-off. There’s not a perfect rental out there. So it’s like, “This place has 2 bedrooms, but it’s more expensive, or this place has a bigger yard, but it’s farther out.”

3. Get a little help from your friends

We were so lucky to stay with Marty and Tera in their guest room until we found our own place. And Tera emailed co-workers to see if they knew of any rentals, which is how we ended up finding this place.

4. Conserve your energy and hire a full-service moving and storage company (if you can)

There’s enough stress in moving at all, amplified by moving cross-country. We probably could have gotten a U-Haul, packed it up, driven it cross-country and put our stuff into a storage unit here. But the logistics, let alone the physical labor, were not extra pieces of stress we needed. And even though it was really expensive, it was worth every penny.