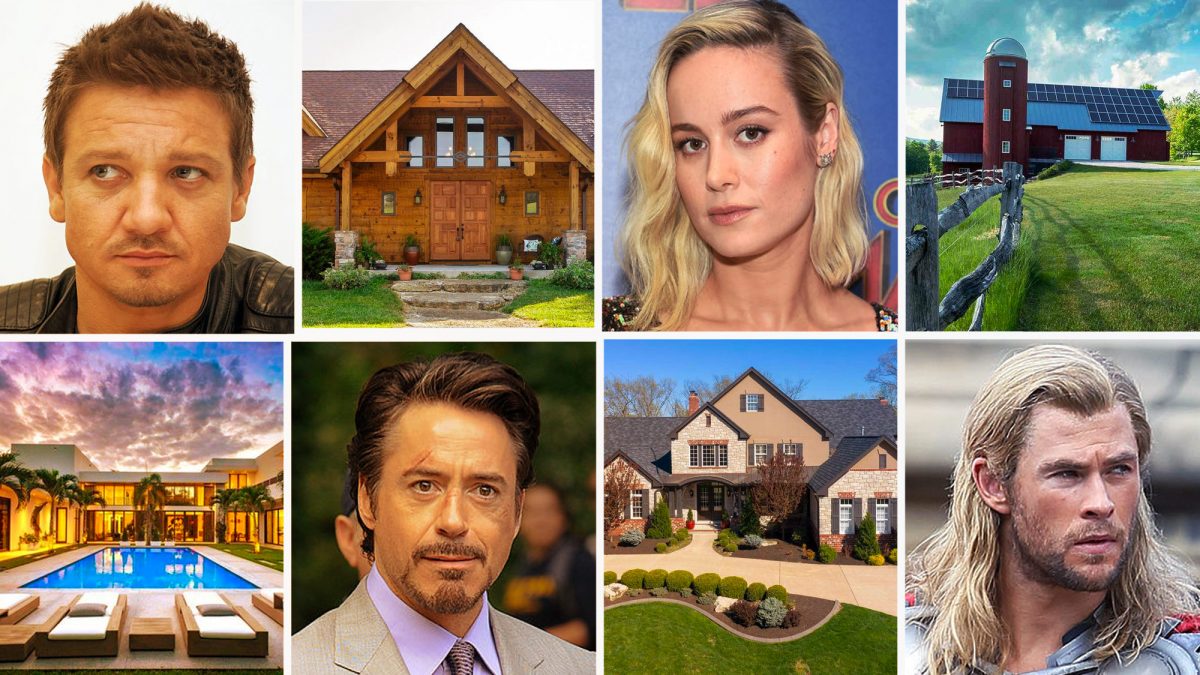 When we last saw the Avengers at the end of “Infinity War,” only a handful remained alive. The rest had been vaporized when the evil Thanos snapped his Infinity Gauntlet–clad fingers and wiped out half of all living creatures in the universe. Ultrasad trombones!

That left just a few heroes to somehow right this terrible wrong and bring most everyone back to life (we hope).

While Iron Man, Hulk, and Black Widow are trying to figure it all out (and while the rest of us are waiting for the first available showing of “Avengers: Endgame” this weekend), we thought it would be fun to find the perfect lairs for our resourceful heroes where they can plot their futures in comfort.

With half of Earth’s residents out of commission, prices might not be an issue, but we’ve included them anyway. But thanks for dealing with that whole intergalactic genocide thing, guys!

Price: $999,000
Plot summary: What could be more red, white, and blue than this classic Colonial, built in the 1940s when Captain America/Steve Rogers (Chris Evans) was at his prefrozen prime? Like Cap himself, the four-bedroom, 3.5-bath home is not too flashy, but it does have all of the modern conveniences that he’s finally gotten used to in the 21st century—including a huge, half-finished basement where he could set up a gym, to keep in shape the old-fashioned way. Plus, the ultimate soldier should feel at home in Annapolis, home to 11 military bases.

Price: $6,490,000
Plot summary: The fabulously wealthy genius/industrialist Tony Stark, aka Iron Man (Robert Downey Jr.), would settle for nothing less than a uber-deluxe smart home with all of the latest technology. Since his last home was so viciously destroyed, we thought this gorgeous nine-bedroom, 9.5-bath palace in Florida might serve as consolation. It’s outfitted with state-of-the-art technology, and with 20 security cameras and floor-to-ceiling impact windows, no one’s going to attack this place. But it’s no bunker—we can just imagine Stark’s better half, Pepper Potts, gliding effortlessly through its lavish rooms with 24-foot ceilings.

Price: $1,799,000
Plot summary: This lovely, lofty home may not be a palace in Asgard, but it’s a lot less drafty. And Thor (Chris Hemsworth) should feel comfortable in the spacious, masculine rooms with multiple fireplaces. There are wide hallways, in case any of that hammer-throwing gets out of hand. But most to the Asgardian’s liking would be the giant game room, with its custom bar that comes with a beer tap—this god does love his grog.

Price: $1,800,000
Plot summary: Captain Marvel (Brie Larson) spends most of her time racing from planet to planet, but this would be the perfect pied-à-terre for her on Earth. The 48-foot observatory—equipped with a world-class, half-meter, robotic telescope—allows her to keep an eye on the rest of the universe. The modern yet rustic interior is also a great place to kick back and relax, if an all-powerful, immortal superhero ever gets the weekend off.

Price: $1,395,000
Plot summary: This home built in 1976, with its generous headroom and close proximity to the prestigious University of California–Berkeley, suits both Hulk and his alter ego, Dr. Bruce Banner (Mark Ruffalo). Banner will find no shortage of intellectual companionship nearby, and maybe could even snag some lab space. The Hulk won’t find many fussy details to impede his raging in the clean, open-concept living areas, and the vaulted ceilings and flexible floor plan give the big guy plenty of breathing room.

Bonus: The interior is neutral, and won’t clash with green.

Price: $829,000
Plot summary: Like Black Widow/Natasha Romanoff (Scarlett Johansson) herself, this two-bedroom, two-bath home is sleek, sensual, and private. Elegant but simple, it has a bit of a woodsy, Zen vibe. Plus, it’s conveniently close to the prospective digs of her good buddy the Hulk. You know, just in case the big guy needs a calming influence.

Price: $1,825,000
Plot summary: This 70-acre property not only allows sulky Clint Barton/Hawkeye (Jeremy Renner) to be isolated and self-sufficient, it also includes two archery/shooting ranges, one indoors and one out. As the only Avenger (as far as we know) with a family, Hawkeye should appreciate the playground as well as the tennis courts. Inside, there’s 11,378 square feet of living space, including a great room where Hawkeye can host a rousing Avengers reunion, should the happy occasion arise.

Price: $310,000
Plot summary: OK, we know Ant-Man/Scott Lang (Paul Rudd) is a normal-size guy who can both shrink himself to molecular proportions and blow himself up to a massive size. Because, physics! But we just couldn’t resist finding a tiny home for his humble self, where he’ll feel much more comfortable the next time he returns from the Quantum Realm. This sweet 384-footer with one bedroom and one bath won’t give him much worry about much upkeep.

Price: $6,450,000
Plot summary: Poor Rocket (voiced by Bradley Cooper) lost almost everyone in his Guardians of the Galaxy family, but his spaceship is still intact, and he’ll need a place to land it. Yes, he’s a genetically modified raccoon, but dude needs some room to roam. Where better than this exclusive compound south of Miami that has direct access to a private landing strip and an air-conditioned, customized hangar that can accommodate up to 20 cars—or one big space cruiser?

The post Heroic Homes Where the Avengers Can Chill While Awaiting Their Endgame appeared first on Real Estate News & Insights | realtor.com®.