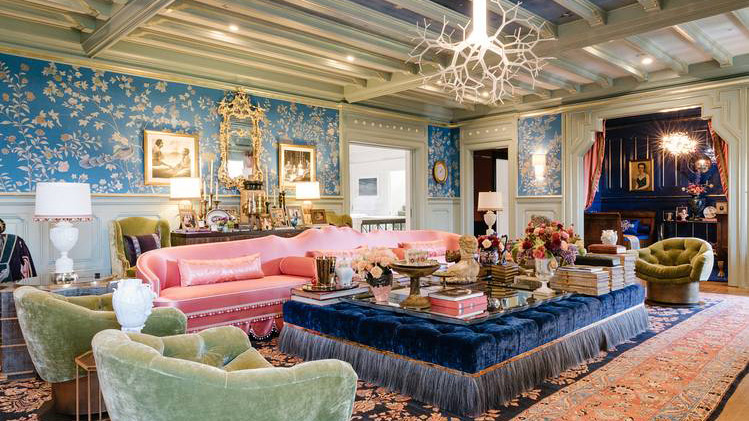 In 2015, a self-described artist and nomad named Jeremiah Kaylor moved into one of San Francisco’s most notable homes: a roughly 18,000-square-foot sandstone replica of Le Petit Trianon at the Palace of Versailles. “It was beautiful, but it was falling apart,” he says.

Mr. Kaylor squatted in the palatial home illegally, for free, for months, selling off any art and accessories he could find before being arrested for burglary and grand theft, among other charges. He called the property his “thug mansion,” after a 2Pac song in which the rapper talked about a paradise in the sky to which he wanted to escape.

It was a notable low point for one of San Francisco’s most iconic—and notorious—homes, one whose wild past mirrors the city’s dramatic history. Located in the posh Presidio Heights neighborhood, the palace-like home was built at a time the city aspired to be the “Paris of the West”, only to be damaged soon after by the famed 1906 earthquake. It was snapped up by a high-profile technology executive made wealthy by the dot-com boom, only to be abandoned and left to ruin (and to Mr. Kaylor) when that executive went broke in the years after the financial crisis.

Now, at a time when tech is again resurgent, the home—sleekly renovated—is coming on the market asking $30 million. Its seller is Ron Jankov. A technology executive who made a fortune selling a startup to Broadcom, Mr. Jankov, 60, works in the Bay Area as a venture capitalist and “dabbles” in real estate.

Mr. Jankov said he’s decided to sell because the home is too large. “No one wants me to sell it,” he said. “But I get lost just walking around it.”

The property dates back to the turn of the century, right around the time former Mayor James D. Phelan had launched his plan to remake San Francisco into an “ideal city” in the image of Paris or Vienna, connecting the business and residential districts with tree-lined boulevards. Built by wool merchant Marcus Koshland, according to the Victorian Alliance of San Francisco, the home is a near carbon-copy of Le Petit Trianon, which was built for France’s Louis XV and was later presented to Marie Antoinette. The Koshlands celebrated the completion of the building with a Marie Antoinette-themed costume ball, according to the alliance.

During the 1906 earthquake, the home’s four exterior columns and the roof’s balustrade collapsed onto the porch. A photo taken from the period shows debris being loaded onto a horse-drawn cart.

In 2007, Halsey Minor, a dot-com boom wunderkind who co-founded software giant Salesforce and media company CNET, bought the house for $18 million. Mr. Minor tapped Michael Smith, the designer behind the renovation of the White House under President Barack Obama, to spearhead a redo.

Then the financial crisis hit. “When the bottom fell out of the economy, I was sitting on a house that made no sense,” Mr. Minor said, noting that banks didn’t want to finance a mansion renovation. “The timing for me couldn’t have been worse.”

He left the house empty, and deteriorating, for many years. By 2010, local skaters had broken in, using the staircases as ramps. Mr. Kaylor found the back door unlocked, moved in and lived there, on and off, for months. He said he took $300,000 worth of art owned by Mr. Minor, who was living in Los Angeles, and sold it.

“It plays into the legendary quality of this property that its history encompasses such highs and lows,” said the listing agent, Joel Goodrich of Coldwell Banker.

Mr. Minor filed for personal bankruptcy in 2013. Three years later, Mr. Jankov picked up the home for $12 million in a trustee sale. By then, the home needed to be completely rewired, its plumbing was shot, the roof was leaking, the stucco was peeling and mold had set in. Mr. Jankov embarked on a three-year, multimillion-dollar renovation.

The result is a mix of the original flourishes combined with much more modern sensibilities. The three-story marble atrium and its stained-glass skylight were restored, and a formal dining and family room has barrel-vaulted ceilings with patterned silk insets. A circular entry with marble flooring is punctuated by six classical columns and crowned with a domed ceiling, and a baronial fireplace is framed in Moroccan tile and carved figures.

On the modern end, the Hall of Mirrors-inspired Gilded Age ballroom has been turned into a nightclub, with inset mirrored paneling and a marble-clad bar.

As for Mr. Kaylor, he pleaded guilty to felony charges related to the crimes and served five months in prison. He said his stay at the property was part of an elaborate artistic experiment to test the bounds of the criminal justice system.

“I’m not just a squatter in a mansion,” he said.