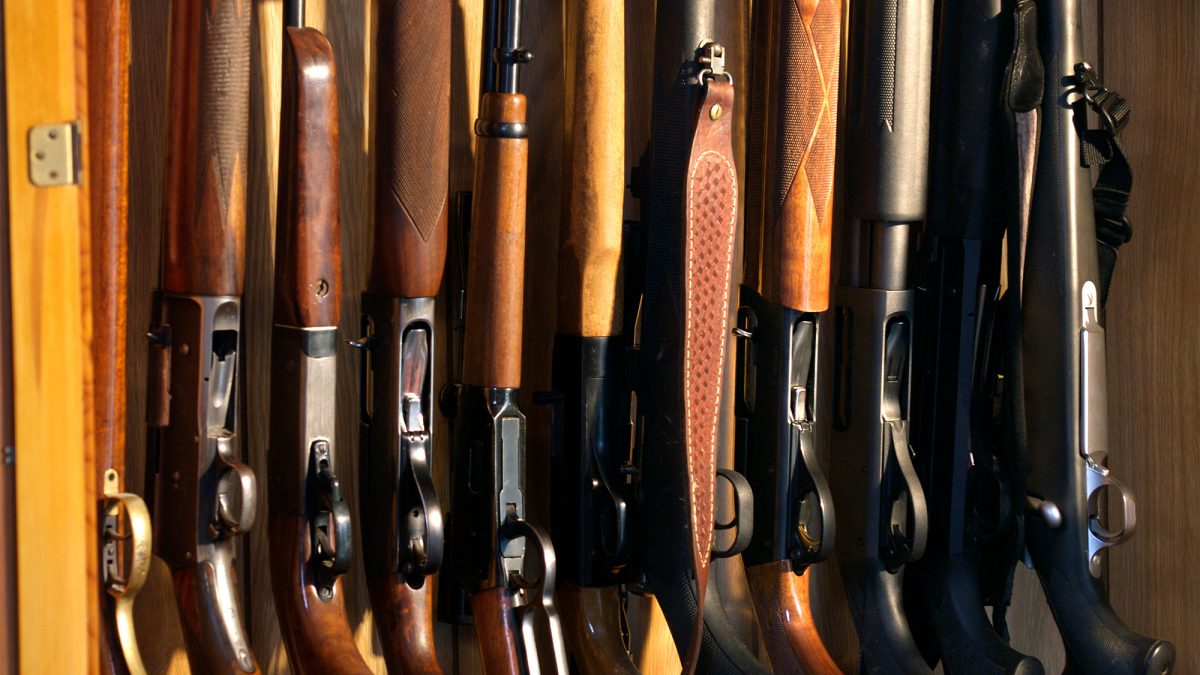 Donald Trump Jr. may keep a fairly low profile compared with his president dad, but Donald Trump‘s oldest son did recently make headlines for almost turning down a posh vacation mansion in the Hamptons.

The reason? According to the New York Post, the house lacked a secure room to store his guns.

After hearing about Trump Jr.’s dilemma, we couldn’t help but wonder if he was the only home shopper who prioritizes such a home feature—and apparently he’s got plenty of company!

We dug through our listings and found more than 400 homes currently on the market that tout a gun room.

Wherever you stand on the firearms debate, gun rooms raise plenty of questions. If you’re selling a home with a gun room, should you mention it? If you’re buying a place with a gun room, are there safety concerns? Here’s everything you need to know.

Should you mention a gun room in the listing?

Although gun rooms are a bit of a niche item, “when potential buyers read that a house has a gun room, they will likely not have a neutral reaction,” says Eric Vaughn, a real estate agent with Upchurch Realty, in Athens, GA.

Amanda Graham, a Washington, DC–based real estate agent with Sotheby’s International Realty, agrees that some buyers might have mixed feelings upon seeing pictures of a gun room in a listing.

“The popularity [of a gun room] varies by location,” she says. “For instance, home buyers in New York [City] most likely would not see this as desirable, versus a home buyer in Idaho.”

Despite this, Graham suggests including a gun room in the listing since potential buyers will find out about it when they eventually tour the home.

“After all, this could end up being a desirable feature,” she says.

What safety features does a gun room require?

A gun room isn’t just any room with a few lockers for gun storage. Most are constructed below ground, in a vault or basement.

Teris Pantazes, co-founder of home preparation service Settle Rite, notes that most gun rooms have specific safety features, such as the following:

For extra safety, some gun room doors include a deadbolt that locks with a key from the outside but can also be turned on the inside—so no one accidentally gets trapped inside, says Jordan Barkin, a real estate agent with Harry Norman Realtors in Atlanta.

Barkin also notes that careful owners of gun rooms will install LED bulbs and a switch both inside and outside the vault, so nobody gets stuck fumbling around in the dark.

A gun room’s impact on resale

Given the niche market of a gun room, how will one affect a home’s resale value?

“Most people will see a gun room as a potential waste of space,” says Lior Rachmany, CEO of Dumbo Moving + Storage. “Even people who have one or two guns wouldn’t usually dedicate an entire room for their guns.”

Rachmany adds that since potential homeowners like to imagine themselves in their future home, a gun room can be an instant turnoff for some.

“Gun rooms are big statements, so be prepared that it can hinder you selling your home,” he warns.

But if you’re OK with a smaller pool of buyers, there is a plus side: “These rooms could attract gun collectors,” he says.

How to list a home with a gun room

When listing a home that includes a gun room, first and foremost mention the room’s safety features. And while including a gun room in your listing photos is fine, all firearms should be removed from your home before your first open house.

“I highly recommend removing all guns from the premise and storing them off-site,” Pantazes says. “Even if there’s a locked area [in your home] that is part of your amenity list, I would recommend clearing it of weapons and ammunition and leaving in an unlocked position so any potential buyers might be able to look inside and visualize their own firearms.”

In fact, Pantazes even suggests advertising the room as either a gun/safety room or a secure storage room for valuables.

“I would include the word ‘gun’ but not make it the sole focus,” he says.

Vaughn agrees that rebranding the room might help reel buyers in.

“It can be included as ‘secure storage closet’ or something similar,” he says. “This description is less likely to leave viewers who couldn’t care less about a gun room thinking, ‘Well, what would I do with that?’”