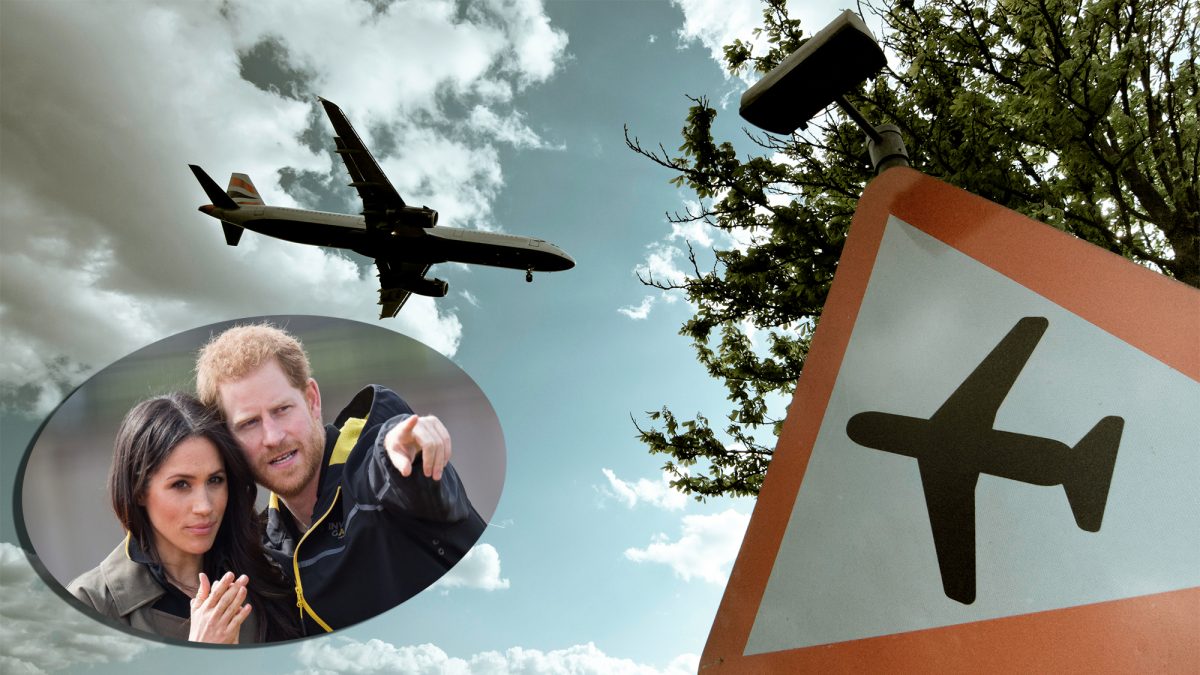 May has been a big month for Prince Harry and Meghan Markle. With renovations finally complete on their new home—Frogmore Cottage in Windsor—they moved in just in the nick of time to welcome their newborn, Archie. No doubt, they’re looking forward to settling down in a safe, secure, and quiet environment to raise their already famous little royal bundle of joy.

Luckily, the home is protected around the clock by armed police who provide safety and security. Still, there’s one assault on this peaceful new existence that they can’t quite fight. And it’s coming from above.

Turns out Frogmore Cottage is a mile from a flight zone from Heathrow Airport, the busiest in all of Europe. And in case you think that’s far enough away to not be bothered too much by noise, think again: Recent visitors to the Frogmore grounds report that the noise from the flight path is deafening—so much so that they wonder how little Archie can sleep.

Here’s everything we know about the royal air scandal, and what you need to know about living in a flight path.

How bad is the noise near Prince Harry and Meghan’s home?

This noise problem came to light recently when the British public was invited to wander through the Frogmore grounds on May 29, as part of a special charity event. The beauty of the lush gardens was broken by the roar of the 14 flights that pass within a mile of the home every 30 minutes on their way to Heathrow, around 7.5 miles away.

One guest even tweeted, “How they’re getting Archie to sleep under this flight path is beyond me. Absolute racket.”

Turns out this “racket” could have negative effects for little Archie down the road. A panel at the U.S. National Library of Medicine National Institutes of Health found that “recent reviews of how noise, and in particular aircraft noise, affect children’s learning have concluded that aircraft noise exposure at school or at home is associated with children having poorer reading and memory skills.”

The Duke and Duchess of Sussex are rumored to have spent about $63,000 on soundproofing, in an effort to block out the plane noise. But if the royal trio heads outside for playtime, what then?

The downsides of living near an airport or flight path

“An airport near a home can be a negative, like a highway or rail line,” says Bruce Ailion of Atlanta’s Re/Max Town and Country.

If the home has high-quality soundproofing—as Harry and Meghan’s does—or if you are able to turn a deaf ear to the rumble of arriving and departing planes, then the noise might not be such a negative. In fact, it could actually land you a deal.

“Most of the time this minor annoyance lowers the property price,” says Jameson Tyler Drew, president of Anubis Properties in Los Angeles.

“Often, more affordable housing can be found near airports, compared with other neighborhoods,” agrees Dr. James Simmons, a Metropolitan State University of Denver professor of aviation and aerospace. “And consumers may decide to trade off affordability for some aircraft noise.”

Also keep in mind that if the home you’re thinking of buying is near an airport—but not actually in a flight path—its location could be a plus, particularly for frequent flyers who crave easy airport access. Another bonus? Airports are usually close to public transportation, which can make your on-the-ground commutes easier, too.

All advantages aside, if you’re truly sensitive to noise, homes near flight paths could drive you nuts. Only how can you tell, if your home tour occurs when flights aren’t roaring by?

“If a new neighborhood is built close to an airport, there is often disclosure of potential noise in the closing documents,” says Simmons. “However, if a property is already occupied when an airport is built, typically there is no disclosure about aircraft noise.”

So do some research to see if a home is beneath a flight path. Start with the official website of the airport near the house. There, you should find a map of the routes that planes follow and the neighborhoods that experience noise pollution.

If you find out that a home is in a flight path, check if it’s for planes that are taking off or landing. While planes make more noise at take-off, because they use more engine power, landing seems louder, because the planes are closer to you.

One ray of hope for Archie? Flight paths change over the years, with airports trying to distribute the airport noise more evenly among the suburbs. And as Queen Elizabeth recently told BBC Radio of Frogmore, “These days there is more noise from the air … but Frogmore remains a wonderfully relaxing environment.”

Here’s to hoping that little Archie agrees and gets some sleep.