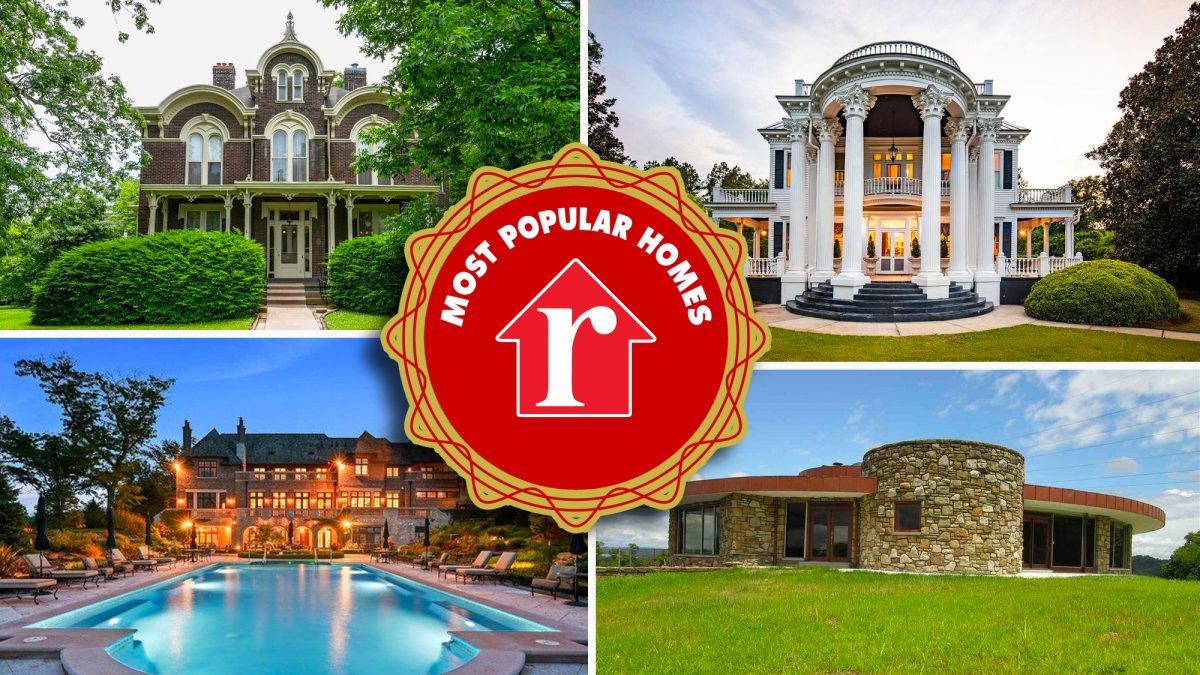 A magnificent lakefront mansion in Illinois that’s served as the home of music mogul Lucious Lyon in the show “Empire” is this week’s most popular home.

Despite its notoriety, the huge home has bounced on and off the market for nearly six years. While it was no secret that the place served as a backdrop for the prime-time soap, the home’s owner didn’t originally want the show mentioned in any of the marketing for the sale.

However, the owner has had a change of heart, and is allowing the home’s current listing agents to play up the “Empire” connection. The renewed marketing push (plus a hefty $3 million price cut) helped propel the home to the top of the charts.

Besides Lucious Lyon’s den, this week’s most clicked homes include an Italianate estate in Kentucky, a seriously cool round house in West Virginia with views of three states, and a Florida waterfront home that was once the winter home of the baseball legend Babe Ruth.

While we can’t say that every home is a home run, we do invite you to take a swing through all of this week’s most popular properties…

Why it’s here: This historic Italianate estate was built in 1870, and it’s the first time since 1877 that the half-acre property has been on the market. Surrounded by mature trees and gorgeous landscaping, the five-bedroom home is filled with ornate, hard-carved woodwork and built-ins. It’s showing a few signs of age, so it’s being sold as is.

Why it’s here: With style to spare, this classic Art Deco home from the 1930s radiates timeless cool. Highlights of the two-bedroom residence include the living-room bar, upgraded bathrooms, custom display shelves, and a lush backyard with a pond and views of a nature reserve.

Why it’s here: From the exterior, this happy yellow Victorian gives off plenty of vintage vibes. However, the home known as “Moses Little Farm” was custom-built in 1996. The four-bedroom residence features a sun-filled kitchen and sun room, finished basement with bathroom, a large kitchen, and a master suite with fireplace. Outdoors, the acre-plus lot includes a pool, mature trees, and rolling lawns.

Why it’s here: Built in 1973 and updated throughout with custom touches, this rustic-chic family home is perfect for a buyer looking for a twist on rough-hewn style. The 3-acre property includes a 40-foot by 50-foot workshop building, custom gardens, a brick patio, fire pit, and covered entertainment area. Indoors, the rustic aesthetic is reinforced with oak hardwood floors, custom wood paneling, and custom wood cabinets.

Why it’s here: Once the winter retreat of the baseball great Babe Ruth, this five-bedroom waterfront Italian villa was built in 1928. It has undergone an extensive, $2 million, three-year restoration, which maintains its original charm while bringing it up to date. We love the wine cellar and the covered dock, now retrofitted with dual jet-ski lifts.

Why it’s here: The “Little Shack on the Prairie” was renovated in 2017 by Chip and Joanna Gaines on season four of “Fixer Upper.” It was originally a falling-down cabin, but the Magnolia mavens fixed the place up for “Fixer Upper” executive producer Michael Matsumoto and his wife, Jessie. The result is a masterpiece, a four-bedroom industrial farmhouse tailor-made for relaxed family living.

Why it’s here: Built in 1895, this Beaux-Arts style home features ornate columns, hand-carved moldings, and frosted glass. Everything within the 5,700-square-foot residence has been lovingly restored. The main house is ringed by balconies and porches and basks in lush grounds featuring magnolia trees, flowering crepe myrtles, a pool, and an antebellum cabin restored as a guest cottage.

Why it’s here: Built in 2014, this five-bedroom home is being sold by the original owner. Standout features include high ceilings, a gourmet kitchen, a Juliet balcony, hardwood floors, a media room, and a second bedroom suite ideal for long-term guests. The home also includes a three-car garage and custom landscaping.

Why it’s here: A little weird in West Virginia? This one-of-a-kind round house—complete with curved doors and round kitchen—was built in 1964 and has been lovingly maintained. The 6,000-square-foot home includes a custom-designed rain shower, two fireplaces, inlaid wood and tile floors, and a patio above the garage for stargazing. The 15-acre lot offers plenty of privacy, as well as views of Ohio, West Virginia, and Kentucky.

Why it’s here: After lingering on the market for nearly six years, this megamansion received a recent round of attention after the owner agreed to disclose that it’s the house used in the hit show “Empire.” Now that the listing agents are free to market it as the home of the series’ protagonist, Lucious Lyon (played by Terrence Howard), they want to leverage the fact that the show is ending, as a way to spur buyer interest.

The 17,500-square-foot mansion sits on 8.5 private acres and it’s exactly the kind of place a mogul like Lyon would own. The estate offers a new home theater, billiard-room, full bar kitchen, pool, and easy lake access.