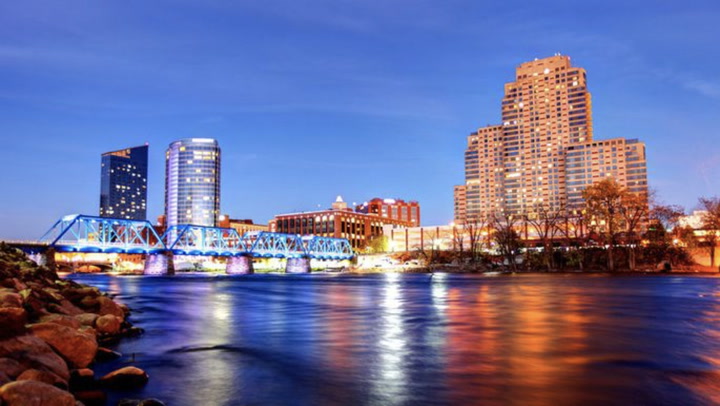 As it turns out, this year’s most sought-after neighborhoods are not those nestled in the nation’s biggest, most famous cities where home prices are just about as high as the skyscrapers. Instead, the hottest ZIP codes are found in substantially less renowned places in the much-more affordable Midwest and Northeast, according to a recent realtor.com® report. They’re the places showing big-time buyer interest and lots and lots (and lots) of home sales.

And these are the kind of places where the average buyers don’t need to auction off their first-born child to have enough money to become a homeowner. Most offer median prices well below the national median list price of $316,000. But buyers had better be quick, because homes in these ZIP codes are selling much faster than the national median of 56 days on the market.

“People are looking for more affordable places to live,” says Chief Economist Danielle Hale of realtor.com. “Last year we saw people moving to far-out suburbs of major cities. This year, we’re seeing people move to smaller metro areas, which are even less expensive. And they still get access to city life—just not in the biggest cities.”

To come up with our findings, our economics team looked at 16,000 ZIP codes from January through June of this year. We figured out which ones received the most page views on realtor.com and had the fewest days on the market. We also looked at median home list prices, mortgage statistics, employment and population growth figures, household incomes, and other demographic statistics. ZIP codes needed at least 12 listings per month to be included. And only the top ZIP code from each metro was included.

So what are the top spots?

Grand Rapids is reigning supreme for the second year in a row thanks to an influx of new residents, particularly younger ones. They’ve transformed the former industrial town into something of a hipster mecca, filled with craft breweries and cool brew pubs. (Hey, it isn’t called Beer City USA for nothing.)

The Creston area is in high demand due to its location just above downtown, plethora of parks, Kent Country Club, and good public schools. The inexpensive real estate is also a big draw for cost-conscious, first-time home buyers. (This is the first time this ZIP made the list, as last year one in the southern portion of the city topped the ranking.)

The area mainly offers suburban-style, single-family houses with backyards starting around $120,000. But prices are rising fast. They’re up 11.3% year over year.

“Grand Rapids has a lot going for it. It’s superaffordable,” says Hale. “Younger buyers are coming in waves.”

Prairie Lane’s appeal lies in its location, just 12 miles west of downtown Omaha near the interstate. There’s plenty of shopping, including the Oak View Mall. And it borders Zorinsky Lake, a bonus for those who like to go fishing.

Plus, there are lots of good jobs in the area at companies such as Berkshire Hathaway, Union Pacific Railroad, and Werner Enterprises.

Like most of the other places on this list, the housing is predominantly single-family homes. Buyers on a budget can score a three-bedroom, three-bathroom fixer-upper with a big backyard and a deck for $167,500. With such prices, it’s not exactly surprising that millennials make up about 43% of buyers in the community.

Meanwhile, those with more green to burn can pick up a 5,400-square-foot, recently remodeled dream home with a luxe master bath on almost an acre of land for $875,000.

You can thank Californians for Boise becoming one of the West’s new “it” cities. As the larger West Coast cities have become more expensive, residents have been fleeing to lower-cost Idaho. The city boasts plenty of outdoor entertainment (e.g., mountain resorts popular with skiers and plenty of rivers and lakes). It also has a burgeoning tech scene.

That’s attracting both workers and retirees. They can sell their modest homes in places like San Francisco and Seattle and buy larger, nicer properties in the Boise area for a fraction of the price. And the Winstead Park area, which encompasses the 83704 ZIP code, offers some of the best bargains around. Homes here are about 38% less than the $399,900 median for the whole city.

In the Winstead Park neighborhood, the majority of the real estate up for sale are single-family homes. Buyers can scoop up two-bedroom ranch homes in need of a little work starting around $200,000. Most of those moving in to the community are older millennials and Generation Xers, according to realtor.com data.

“Boise has a great tech scene with lots of local employers,” says Hale. The area is “a big draw for people in California and Washington who want to stay in the industry, but are tired of the expenses.”

You don’t have to spend a fortune to own a home in a walkable downtown with plenty of locally owned restaurants and shops. But you may have to move to Old Shawnee. This Midwestern suburb is just 10 miles southwest of Kansas City, MO, along Interstate Highway 35.

However, prices may not stay low for long. They’ve jumped 16.4% year over year in the 66203 ZIP code. And millennials are at least partly the reason—they made up about 43% of buyers in the area with mortgages. But most of the residents there are older families who have been there for years, says local real estate agent Rosemary Male of Better Homes & Gardens Real Estate Kansas City.

Single-family homes under $200,000 go fast. But patient—and persistent—buyers can find a few listings for just under that mark. This cheerful, three-bedroom, 2.5-bathroom ranch with a deck was listed at $189,000. And it was recently remodeled.

The area, which is between two major highways, “is centrally located and it’s got a strong hometown vibe to it,” says Male. “They have festivals and different events in that area a lot.”

This former industrial town, where Kodak was founded in 1888 near the southern shore of Lake Ontario, has become popular with those looking for a great real estate deal. It’s a lively place to be thanks to all of the college kids attending the University of Rochester and nearby Rochester Institute of Technology.

Plus, the North Winton Village area is the cheapest ZIP on our list. The median price for the entire city isn’t too bad either, at a still-pretty-low $146,900.

Handy folks can pick up a nearly century-old, single-family home for under $500,000. But plenty of move-in ready abodes abound for less than $100,000. This four-bedroom, one-bath house with a wood-burning fireplace and fenced backyard is listed at $94,000.

“Young buyers are looking for affordability, and that’s why they’re flocking to this ZIP code,” says Hale. Plus, there are plenty of jobs in the “medical and education industries.”

Those who enjoy the cultural amenities of Detroit, but don’t want to live in the city as it continues to undergo a resurgence, are opting for suburbs like Livonia. The oasis of single-family homes with green lawns is just 20 minutes from the Detroit Institute of Art and the historic Eastern Market. It’s also near many of the area’s employment hubs such as the Ford Motor Co. headquarters in Dearborn.

But with more buyers discovering the area and more newly constructed homes going onto the market, there’s been a bump in prices. They shot up 6.2% year over year, according to realtor.com data.

Most of his clients are in their 30s and 40s buying newly constructed three- or four-bedroom homes in the $320,000 range.

However, there are still plenty of bargains in the area. Folks can snag ranches starting in the low $100,000 range. This four-bedroom, one-bathroom ranch with an enclosed sunroom, deck, and two-car garage is going for $129,900.

Those who don’t want to deal with home maintenance may prefer a condo. This 1,800-square-foot, three-bedroom, 2.5-bathroom brick condo with a fireplace is listed at $195,000.

Melrose is the exception to the affordability rule. The more affluent Boston suburb, just 10 miles north of the city, boasts a strong school system, several rail stops for easy access to Boston, and a quaint downtown filled with restaurants, shops, and art venues. That may be why this community also made realtor.com’s top ZIP codes list in 2016.

But buyers had better pony up: Homes in Melrose cost nearly double the national median price. And that’s even after prices dipped 1.7% compared with last year. However, everything is relative. Melrose is still a bargain compared with the median $1,400,500 home price within the Boston city limits.

The area does have some more affordably priced condos for those who don’t mind investing in an update starting around $265,000. This renovated one-bedroom with a balcony is going for $275,000. Single-family homes go for much more, with ones in need of some work starting around $450,000.

“Melrose is driven by buyers looking for the suburbs,” says Hale.  “And it’s less expensive than other towns [nearby].”

If you’re wondering what Arlington’s secret sauce is, it’s the city’s location. Arlington is ideally situated in the bustling region between Dallas and Fort Worth. And as more large companies are moving to and expanding in the area, there are plenty of new residents in need of affordably priced housing.

Home prices in the Southeast Arlington area rose 7.5% year over year. But they’re still a steal compared with Dallas, where homes are going for a median $459,000 within the city limits, and Fort Worth, at $272,000. In Arlington, move-in ready, three-bedroom homes start around $200,000.

Local buyers can put their savings toward an epic night out in one of the bigger cities, which are within a short commute. Or sports fans can splurge on a game at the AT&T Stadium, home of the Dallas Cowboys, or the Globe Life Park, where the Texas Rangers baseball team plays.

Admit it: You’ve probably never heard of Goffstown. The city of approximately 18,000 residents is located about 90 minutes north of Boston and just west of New Hampshire’s largest city of Manchester.

The Pinardville area, which includes 03045, is a quaint, historic Northeastern town with tree-lined streets where everyone seems to know your name. The downtown boasts older brick buildings housing the town’s mom and pop shops and restaurants. It’s located just near Saint Anselm College, one of the area’s oldest, Catholic liberal arts schools with about 2,000 students.

Prices area high compared with the rest of the nation, but they’re a fraction of the $1,400,500 median home price in the city of Boston and the $589,900 median price tag in the Boston metro area.

Those who like the outdoorsy culture of Denver and Boulder—but not their high home prices—are increasingly looking at Colorado Springs instead. The city, known for its 1,300 acres of stunning, natural sandstone formations in the Garden of the Gods, is only about 70 miles south of Denver. And it offers its own local brewery and tech scenes as well as plenty of outdoor activities.

The 80916 ZIP code hasn’t always been the most desirable place to live. It does encompass the local airport and abuts the Peterson Air Force Base, after all. But the area’s mix of townhomes and single-family homes are significantly cheaper than in the rest of the city. The median price in the Colorado Springs metro area, which includes neighboring towns, is about 56% higher, at $383,000.

Two-bedroom townhomes start around $150,000, while a detached house will set buyers back about $160,000 and up. This four-bedroom house with a double deck and stainless-steel appliances is listed at $159,900.

“It’s not too far from Denver, so depending on traffic it’s only an hour or so,” says Hale. “But it’s significantly more affordable.”