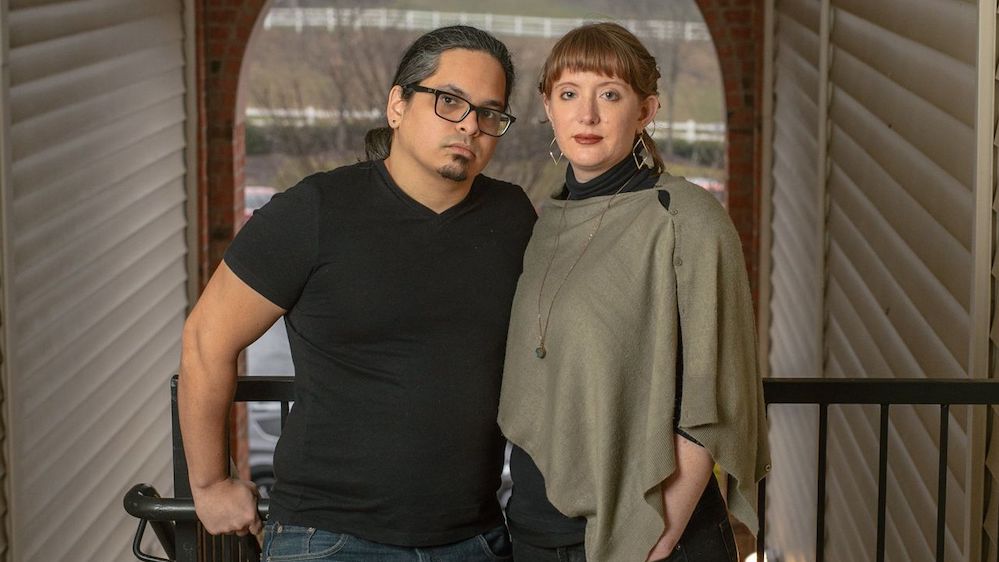 Alex Ruiz, 29 years old, and his wife, Stephanie Johnson, have steady jobs, are setting aside money for retirement and are slowly paying down their student debt.

Yet buying a house seems out of reach for at least another decade. Home values in Asheville, N.C., where they live, are up some 70% over the past seven years. Their student-loan payments and rising rent have made it difficult to save for a down payment, and the houses that go on the market get snapped up right away.

“Day to day we’re OK generally,” said Mr. Ruiz, a case manager at a government-funded agency. “But the depressing part is when we take a hard look at the possibility of our future.”

For generations, the wealth of U.S. households was built on the foundation of homeownership. That is changing.

Homeownership rates for younger Americans have fallen sharply over the last decade. The median age of a home buyer is 46, the oldest since the National Association of Realtors began keeping records in 1981. Economists, policy makers and mortgage lenders expect the trend to extend to younger generations. The decline illustrates what for many Americans is the real legacy of the financial crisis. 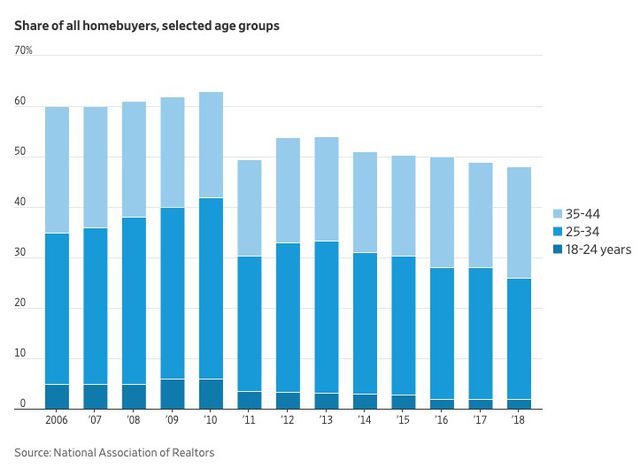 People who came of age in the crisis and its immediate aftermath had no bargaining power when they entered the job market, crimping their earnings ever since. They started adulthood when the housing market was crashing and watched as banks foreclosed on their parents—and decided they weren’t interested in tying their fortunes to a piece of property.

Now, as memories of the crisis fade, they want to buy homes but are finding themselves priced out of the market. Home prices have risen across the board but most steeply among the starter homes first-time buyers can afford, as developers focus on high-end properties where profit margins are higher. The average price of lower-priced homes rose by 64% from early 2012 to late 2018, according to mortgage-data tracker CoreLogic, while the price of higher-end homes rose just 40%.

The effects are already reverberating through the economy. More adults in their 20s and 30s are living with their parents, according to census data, which could make them unwilling or unable to move cities for better jobs. The possibility of rent increases could make them less willing to spend, which some economists believe has already contributed to the economy’s slow postcrisis growth. Some young adults said their inability to buy a home had made them rethink having children, which could exacerbate the challenges created by America’s aging population.

Homeownership rates for young people are near their lowest levels in more than three decades of record-keeping. About 40% of young adults, ages 25 to 34, were homeowners in 2018, according to federal data analyzed by Freddie Mac. That is down from about 48% in 2001, when Gen X-ers were young adults. Some economists calculate the decline is actually even steeper.

The crux of the problem: Home prices have outpaced wage gains. From roughly the end of 2000 to the end of 2017, median home prices rose 21% after adjusting for inflation, while median household income rose 2%, according to federal and industry data analyzed by Freddie Mac.

Some of the drop in homeownership is a matter of preference. The financial crisis made today’s young adults averse to debt and risk, lenders say. That means they might be willing to spend on daily luxuries but not to tie up the bulk of their money in a mortgage.

Millennials aren’t making up for lost home equity in other investments. The median net worth for young families plunged by nearly a third from 2001 to 2016 after adjusting for inflation, according to the Federal Reserve.

Even if millennials soon start buying homes en masse, as some banks and mortgage lenders predict, there are consequences to buying late. A recent report by the Urban Institute examined homeowners who turned 60 or 61 between 2003 and 2015. Those who bought their first home between ages 25 and 34 had median housing wealth of about $149,000. Those who waited until ages 35 to 44 had half that.

The effects of not buying, or buying late, should become more clear as millennials enter new stages of life. The median family net worth of homeowners is more than $230,000, according to the Fed, compared with $5,000 for renters.

Without home equity, people are less able to weather job losses or unexpected medical expenses, and less able to start small businesses. Baby boomers could find that when they want to downsize, there are fewer buyers because younger adults never built up equity in a first home. And decades from now, millennials might have to keep working well into retirement age.

“Jobs are plentiful, the economy seems good, and lenders are going to look at this and say, ‘Everything’s great,’” said Brad Blackwell, who recently retired as head of housing policy at Wells Fargo & Co. “But they should take the long view.”

In Philadelphia, Nate Baird and his wife have set a goal to buy a home next year, before their son starts school.

Mr. Baird, an emergency-preparedness planner, took a second job teaching at a local university to earn extra income to save for a down payment and pay off student debt.

Though mortgage rates are low, that matters little when home prices are rising faster than income. Increasingly, the young adults who can afford homes will be those whose parents can help with a down payment, economists and lenders said.

Elysse Lane, 32, and her husband finished business school in 2016 and wanted to live in the San Francisco area, where she had a job offer and family. They moved to Austin, Texas, instead, in large part because buying a home in California seemed impossible.

But the market in Austin is crowded too. They have put offers on three homes but lost to other bidders. One small comfort: They don’t really feel out of place. Many of their friends are in similar situations.