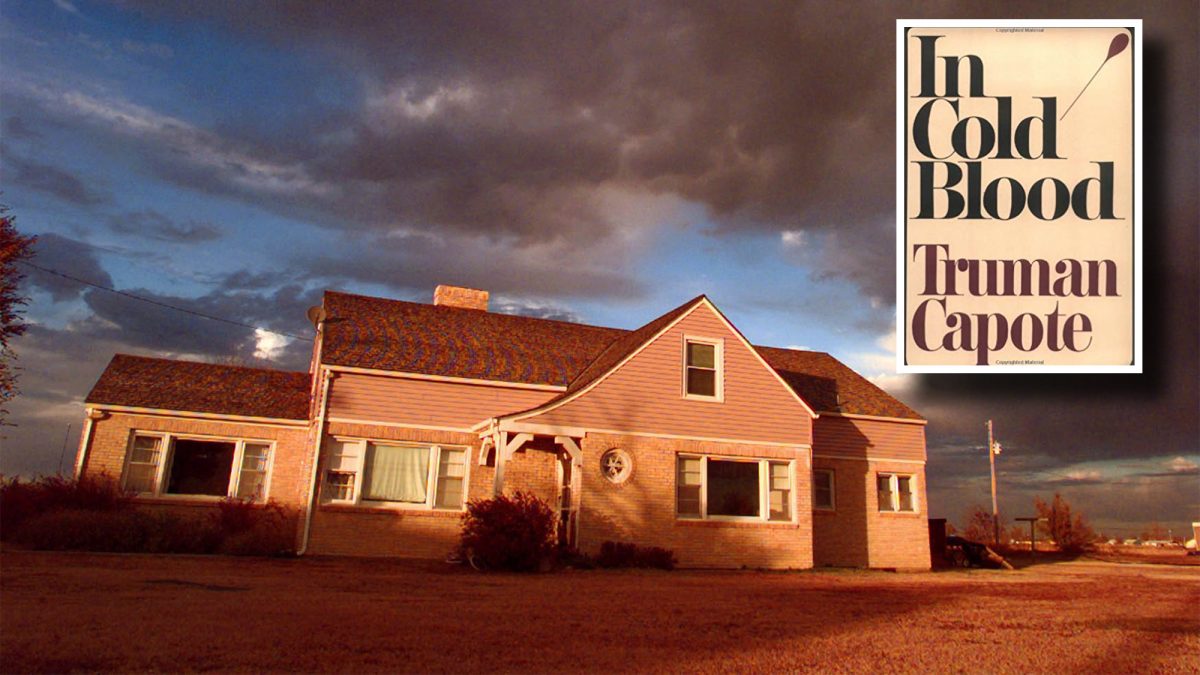 Sixty years ago, a prosperous farmer, his wife, and two of their children were murdered in their rural Kansas home in the middle of the night, by a pair of strangers. The slaying of the Clutter family in America’s heartland and the ensuing search for the killers captivated a terrified nation. Writer Truman Capote‘s best-selling account of the crime, “In Cold Blood,” became a literary classic—and catapulted the Clutter house into infamy.

The Clutters, their killers, even Capote himself, are all long gone. But remarkably, the 14-room farmhouse in Holcomb still stands, eerily looking much as it did that fateful night in 1959.

Long before it was an attraction for hordes of true-crime fans, sometimes undeterred by the prominent “Private Property” signs on the edge of the grounds, the Clutter home was the jewel of the small town of Holcomb. It has had a long, strange journey since then—from a source of community pride to infamous crime scene to movie location (portions of the film version of “In Cold Blood” were shot there), and finally back again to a family home.

Now, this four-bedroom home and the roughly 9 acres it sits on will be going on the market again. The question remains: Will it ever be able to shed its bloody past?

“It was a beautiful house,” the Clutters’ niece Diana Edwards said in the 2017 four-part documentary “Cold Blooded: The Clutter Family Murders.” “But nobody should have ever gone in it again.”

Capote’s book ingrained the Nov. 15, 1959, murders of Herb and Bonnie Clutter and their teenage children, Nancy and Kenyon, into America’s psyche. Ex-convicts Dick Hickock and Perry Smith broke in to their home to search for a safe that did not exist, and killed all those present with a 12-gauge shotgun, so as to not leave any witnesses. (The Clutters also had two adult daughters who were no longer living at home.)

When no one answered the door the next morning, Nancy’s friend Nancy Ewalt went inside to check on her.

“I saw Nancy in bed,” Ewalt testified in the trial. “I thought she was sleeping or something, so I went over to shake her to try to wake her up and I saw blood all over the wall.”

“I’ve seen some gory things in my time, but nothing as gory as that: what we found in the Clutter house Sunday morning,” the coroner, Dr. Robert Fenton, said at the time.

A modern home that was the pride of its community

Just over a decade earlier, the two-story farmhouse designed and built by the Clutters was famous for quite a different reason. Stylish and modern, it was heralded as an achievement in the community when it was completed in 1948 at a cost of $40,000.

Here was a new house with 2.5 bathrooms at a time when not everyone in rural America had running water. At least one local newspaper ran photos of the family and their new residence on its cover.

The Clutters would host family gatherings, parties, and meetings for the local 4-H Club and Farm Bureau there.

“It was a really nice house for its time with a lot of innovations,” says Laurie Oshel, assistant director of the Finney County Historical Society and Museum in Garden City, KS. (Holcomb is in Finney County.)

Oshel remembers that the kitchen cabinets went straight up to the ceiling, well out of reach for most homemakers. But in a clever solution, a board could be pulled out of the bottom drawers and used as a step.

The blond brick house stood out among the white stucco and wood siding that were popular in the area at the time, says Finney County Sheriff Kevin Bascue. It also had an unusually large basement, which would later become the site of Herb Clutter’s murder.

Many visitors from outside the community are surprised the home wasn’t simply demolished after the tragedy, but they aren’t taking into consideration the realities of local life.

“People in the community are very practical,” says Ralph F. Voss, author of “Truman Capote and the Legacy of ‘In Cold Blood.’” “Why would you tear down a perfectly good house?”

A blessing—and a curse—for recent owners

The spacious house was at first a blessing for its most recent owners, the late Leonard and Donna Mader, who purchased it in 1990. (Leonard died in 2007; he was 76. Donna died in July, at age 82.)

Like everyone else in that part of Kansas, the Maders were familiar with the murders; they even knew the family from the community. Leonard had farmed the land for the owner before him, a divorced cattle rancher named Bob Byrd. Byrd purchased the house in 1964 from a couple who had owned it for only a year after buying it from the surviving Clutter daughters and their husbands. Donna would play cards in the home with Byrd’s son and daughter-in-law.

Sheriff Bascue remembers patrolling the Clutter farm in the mid-’80s, before he was promoted. Byrd was gone much of the time.

“People would go in and trespass,” he recalls. “We would go every night, check the doors and windows, make sure everything was secure.” Nonetheless, the location became a magnet for the curious—and even a make-out and party spot for local teenagers.

After Byrd committed suicide (not in the house), his relatives offered to sell the home to the Maders. It must have seemed fortuitous for the couple, who had six children and craved a larger home and farmland of their own.

“We had a lot of, you know, weird feelings,” Donna Mader told The Oklahoman about moving into the home. “But after several years, you realize the house didn’t do anything, and besides I keep my doors locked and we have dogs.”

However, the house’s notoriety became a problem in later years.

The Maders had expected the attention from fans of the book and movie. But they didn’t expect the fascination to endure for decades.

“It’s probably one of the most famous houses in the United States,” Leonard Mader was quoted as saying in an Associated Press article from the mid-1990s. “We have cars come down here every day, from England, France, Germany, Japan—you name it.”

Their sons used to fire guns into the air to scare away curious trespassers, according to The Lawrence Journal-World.

Donna Mader’s “feelings with the house was, just burn it,” says Finney County Historical Society’s Oshel, who heard this from a co-worker. “She was tired of being bothered.”

Short stint as a tourist attraction

In an effort to turn a negative into a positive, the Maders began offering tours of the home in the early 1990s, charging $5 per visitor. They even considered turning it into a bed-and-breakfast.

“It’s an odd situation—showing this house. I can’t believe the way people are so curious and fascinated,” Donna Mader told The Garden City Telegram a few months after the family began the tours. “Some people are just obsessed about what happened here.”

But after a few years the tours were discontinued due to complaints. The home wasn’t zoned for commercial use, so the new owners couldn’t legally operate a business there.

Perhaps more importantly, “it was upsetting for some people who had ties to the house,” says the Maders’ daughter Sue Wieland.

In 2006, before Leonard’s death, the Maders attempted to auction off the property. Open houses were held, drawing folks from all over but few serious buyers.

“It was too big for them,” says Wieland, who was also the real estate agent. She was an adult when her parents bought the home and never lived there. “There were only two people, and it was an over 5,000-square-foot house. They wanted to get something smaller and downsize.”

However, low bids and family troubles derailed the couple’s plans to sell the property, says Wieland.

But now the home is going up for sale yet again.

Wieland hopes to have the house, which comes with a detached garage and two Quonset buildings for storage, back on the market within the next month or so. She’s waiting on an appraisal, and relatives are looking after the property. She says there are already a few prospective buyers.

Small town has grown, but not much has changed

Holcomb has grown dramatically from just a few hundred residents in the late 1950s to just over 2,000 today, but it’s still primarily a farm community of ranchers and farmers growing wheat, corn, alfalfa, and milo (a type of sorghum).

There’s just one restaurant in the center of town, a Mexican joint called the El Rancho Cafe, across the street from a small grocery store/gas station. A Sonic Drive-In and a Subway sandwich shop are located at the edge of town.

The community has been buoyed by a beef-processing plant that opened just outside of town about 40 years ago. It employs more than 3,500 workers. It’s also become something of a bedroom community for neighboring Garden City, just 7 miles west, with a population topping 26,500 as of last year, according to U.S. Census Bureau data. (Hickock and Smith, who killed the Clutter family, were tried there.)

The bottom line, though, is that it’s still a small town, and there aren’t a ton of buyers jostling for properties—much less one with a tragic past.

What may wind up helping—or hurting—the sale of the Clutter house is that it’s practically the same as when the Clutters lived there.

“Everything is original in that house, just about,” says Wieland, who touted the two fireplaces as well as the bathroom on the main floor with a glass block enclosure for the bathtub and shower. “It’s so different, but it’s really neat.”

But residences where brutal crimes took place typically sell for a 10% to 15% discount, say real estate appraisers. And while the stigma typically diminishes over time, the more famous the home, the more difficult it can be to find a buyer offering a good price.

If the home is in good shape, it could fetch anywhere from $150,000 to $200,000, theorizes local real estate agent Tamara Hunter of Heritage Realty.

But she believes it’s more likely to appeal to an out-of-town buyer who’s intrigued by the home’s history. Locals, especially those with connections to the Clutter family, might be more hesitant. Plus, the home remains very isolated, shielded by a quarter-mile driveway.

“It was a good family and a sad memory,” says Hunter, whose mother was friends with Nancy Clutter.

At a time when true crime is a wildly popular genre in books, TV, and podcasts, it seems unlikely that obsessions with this famous murder case, and the home in which it took place, will fade. The new owners will have to deal with all that attention, as well as their own feelings about the home’s sad history.

“It amazes us that everyone is still fascinated by it,” says Wieland. “There are people … who drive up and down the lane and just stare at the house.”

Denny Foreman grew up in Kansas hearing tales about the crime and wanted to see the home. In 2006, he drove 400 miles across Kansas to attend one of the open houses. Still, he doesn’t think he’d be able to live there.

He took a picture of a red blemish on a basement wall, which the Maders told visitors was a bloodstain from when Herb Clutter was killed.

“You’d be consumed … thinking about what happened there,” says Foreman, now 64, of Lenexa, KY, who works for a residential appraisal management company. “I don’t know how someone could get it out of their mind.”

Natalie Way contributed to this report.

The post The Untold Story Behind the Infamous ‘In Cold Blood’ Murder House—and Why It’s for Sale appeared first on Real Estate News & Insights | realtor.com®.