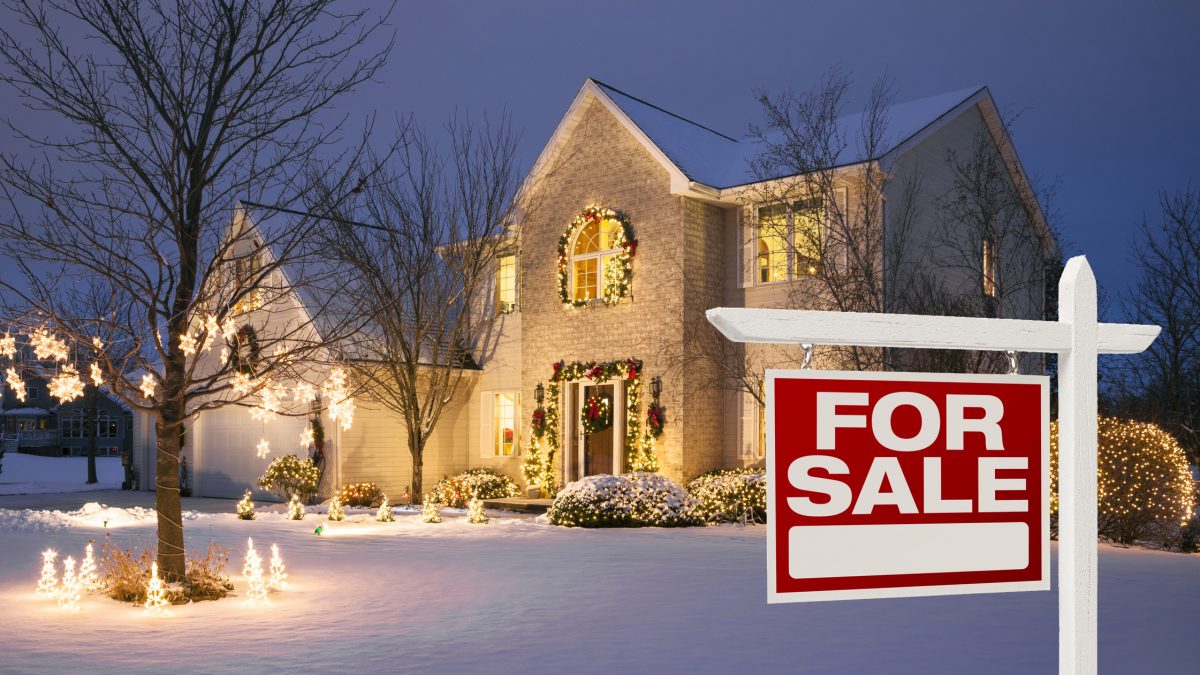 The holidays are a time of celebration and togetherness—but also of hectic planning, weird family hassles, high stress, and lousy weather in much of the U.S. Plus “Love Actually” and “Die Hard” are on basic cable around the clock! It all adds up to the very worst time of year to buy a home. Right?

Spoiler: Not necessarily! In some parts of the country, the holiday season can actually be a bonanza for buyers. You just need to know where to look. The realtor.com data team uncovered 10 markets where sales are particularly strong during the holidays. And you might be surprised by some of the entries on this list.

So what can make the holiday season such a great time to buy? From Thanksgiving through early January, fewer people are looking for properties, so there’s a lot less competition. Buyers are likely to get more undivided attention from sellers, and, because this is the time of year when people burn off vacation days, they may have more time on their hands to dedicate to home search.

“This time of the year is a traditional vacation period, so buyers have time to look at homes and not just on weekends, which gives them more flexibility,” says George Ratiu, senior economist at realtor.com®. “And sellers can spend time showing their houses in a less frantic environment.”

Bad weather bonus: In colder or rainier climes, viewing a property during the winter allows you to see how it holds up to the elements.

“You can get a much more realistic picture,” says Ratiu.

To figure out where the most homes are flying off the Christmas/Hanukkah/Kwanzaa/New Year’s/Festivus shelves, realtor.com looked at sales in the 100 largest metros from Nov. 19, 2018, through Dec. 31, 2018, and then compared the numbers with all of the sales in those metros in 2018. (Metros include the main cities, plus the surrounding towns, suburbs, and smaller cities.)

The same thing that makes Hawaii such a fab place for a dead-of-winter vacation escape also makes it the nation’s leading place for holiday home buying: gorgeous weather!

And plenty of holiday vacationers are so gobsmacked by the beauty of the place, they feel compelled to look for a vacation or second home on the same trip, according to George Krischke, principal broker at Hawaii Living. (Once they get finished watching Santa arrive by canoe on Waikiki Beach they’ll likely have some time to kill.) Meanwhile sellers don’t have to worry about blizzards hijacking their open house.

“It’s no coincidence that [a sales spike] often concurs with the peak holiday season,” Krischke says.

Resort neighborhoods such as Waikiki are some of the most popular among buyers who seek beachfront homes. Condos in high-rise buildings, especially those priced from $400,000 to $1 million that allow short-term renting, are a draw for buyers.

Looking for something a little more luxurious? This two-bedroom, two-bathroom, 1,240-square-foot corner unit boasts ocean, lagoon, and city views and is currently listed for $1,665,000.

Buyers looking for a deal on a tony home in Connecticut’s Fairfield County—located within the Bridgeport metro—don’t let the holidays, cold weather, or relatively high real estate prices stand in their way. And those who can’t quite afford the white-knuckle prices of the famously wealthy enclaves of Greenwich or Westport have some cheaper options in the area, most notably the city of Bridgeport itself, where the median price is just $204,900 (as of Nov. 1).

The city, which struggled economically for years, has been going through a resurgence of late. The North End is a popular neighborhood for families and offers single-family homes, like this updated Colonial-style three-bedroom for $309,000.

Steven Lage, a real estate agent with Coldwell Banker in Trumbull, CT, says the metro, like many areas, sees lower inventory during the season.

“Buyers don’t have a lot of options so they need to be ready to make an offer when the right house comes up,” he says.

This is another place where Christmastime temps dipping well below freezing doesn’t deter home buyers.

“Demand still far exceeds supply in most segments of the housing inventory here, which means there is no need for sellers to wait for the traditional spring market,” says Kevin Coyne, a local real estate agent with Coldwell Banker.

Portland’s East End and West End neighborhoods, collectively referred to as The Peninsula, are particularly popular with buyers. The areas have great walkability and are home to shops, restaurants, and galleries—a draw for anyone from young professionals to boomers alike.

Local architecture is “eclectic,” Coyne says, and a variety of home styles are available “from nice Cape Cod–style homes to large Victorians to everything in between.” This three-bedroom home is listed at $524,900.

The mild winters in El Paso make it a place where snowbirds and retirees can migrate when they’ve had enough of the cold—and get a good deal on a second home. Wintertime temperatures average around 60 degrees Fahrenheit, so there’s no cold to deter those on a quest for a new place.

Bear Ridge, High Ridge, and Thunderbird are some of El Paso’s hottest neighborhoods. Architecture in these areas often reflects the city’s desert scenes, with earth-tone stucco, adobe roof tiles, and yards landscaped with cacti and palm trees. This 2,500-square-foot, four-bedroom home with a pool in High Ridge is listed for $339,990.

One of the most appealing aspects of living in Harrisburg, the state capital, is that you can own a home nearby in a bustling, small city for around $200,000. Uptown, a desirable neighborhood for families and young professionals, is full of Victorian-style homes and charming brick townhouses as well as plenty of dining and shopping options. You can find deals like this five-bed, 2.5-bath, 2,700-square-foot home priced at $195,000.

And about 30 minutes away from Harrisburg is the town of Hershey—yup, home of Reese’s Peanut Butter Cups, Kit Kats chocolate bars, and Hershey’s Kisses—which hosts the annual Christmas Sweet Lights, a 2-mile animated light display which is said to have approximately 2 million lights. Approximately.

Barbecue may not be traditional Christmas cuisine, but it comes pretty darn close in Kansas City, especially in and around the downtown area. Those looking to make a regular feast of it, set on owning near the city center (aka not escaping to the burbs just yet), look to the Midtown-Westport neighborhood, which offers plenty of restaurants, shops, and music venues. Here you’ll find a mix of well-priced homes (including this adorable 1,600-square-foot, three-bedroom for $229,000) and condos (such as this two-bed, two-bath with spectacular views of the Country Club Plaza shopping area).

But if you want to own a great home in a family-oriented, commutable area, look to one of the surrounding towns like Leawood, a popular suburb just 30 minutes from the center of Kansas City. There you can find a variety of home styles with ranch, farmhouse, and Craftsman architecture being most common. Check out this adorable three-bedroom Tudor-style home for $419,999.

Kansas City knows how to do the holidays right. It kicks off the season with the lighting of the Christmas Plaza, an event with horse-drawn sleigh rides, and caps it with a heart-pounding performance from the Trans-Siberian Orchestra, an annual city tradition.

This isn’t the first time we’ve seen Stockton pop up on one of our top 10 lists. The city also made our ranking of the U.S. housing markets that will rule 2018. So it’s no surprise that it’s seeing a steady flow of buyers, even at a time of year when markets in other areas grind to a halt.

The main reason Stockton is seeing a lift, during the holidays and beyond: Its cost of living is far lower than that of other Northern California cities in proximity to the San Francisco Bay Area. (The median list price in the San Francisco metro area is more than double Stockton’s, at a jaw-dropping $933,000.) And Stockton’s mild winter weather guarantees house hunters won’t be snowed in, even during the holidays.

Stockton’s most popular neighborhoods for house hunting are Pacific, Brookside, and Lincoln Village West, and many single-family homes, condos, and townhouses are available in a variety of styles. Located in Pacific, this 2,100-square-foot home is listed at $488,000.

Over the holidays, Raleigh radiates festive energy. And it’s more than just the big downtown parade, a lighting of the city Christmas tree by the mayor, or even the staging of a musical comedy version of “A Christmas Carol.” It’s also the buzz from eager home searchers and buyers.

Because of its proximity to the Research Triangle—a major employment center made up of three research universities—Raleigh is a major hub for high-tech and biotech research. People relocate here for gigs year-round. And there are a number of family-friendly towns in the area they gravitate toward, including Brier Creek, Five Points, and Oakwood. A 2,600-square-foot home in this area will set you back about $525,000.

House hunting in Buffalo during the holidays requires a good parka, but locals are famously tough—hey, the Buffalo Bills play in an outdoor stadium, and they’re in the NFL playoffs this year! The frigid temps just seem to energize buyers here. Homes that hit the market in December and that are priced right tend to sell quickly, says Ryan Connolly, associate real estate broker with Re/Max Plus in Buffalo.

“There is a benefit to having little competition that time of year as a buyer—and homes can show quite nicely when decorated for the holidays,” he says.

Buffalo features many older homes with “wonderful character and one-of-a-kind homes rarely found in newer cities,” Connolly says. This home, built in 1925, features a retro kitchen and is listed at $184,900.

A local holiday favorite in Springfield is the annual Bright Nights at Forest Park, a large, drive-through light display that has been going strong for 25 years. Why get out of your car if you don’t need to?

Save the walking for holiday season home touring. The city in Western Massachusetts, about 90 minutes southwest of Boston, is an affordable and desirable place to live, and its residents tend to stay put, says Elizabeth Eisold, real estate agent with Coldwell Banker Residential Brokerage. This season is a good time to gain an edge.

“The holiday market here stays hot because this time of year is when we see the serious buyers come out,” she says.

East Forest Park and Sixteen Acres are popular neighborhoods, and Eisold says there’s a strong demand for multifamily and single-family homes of any style. New homes are also available, including this Colonial-style, four-bedroom built in 2017 listed at $345,000.

The post Ho, Ho, Home Buying? Here Are the Top Markets to Buy a House During the Holidays appeared first on Real Estate News & Insights | realtor.com®.