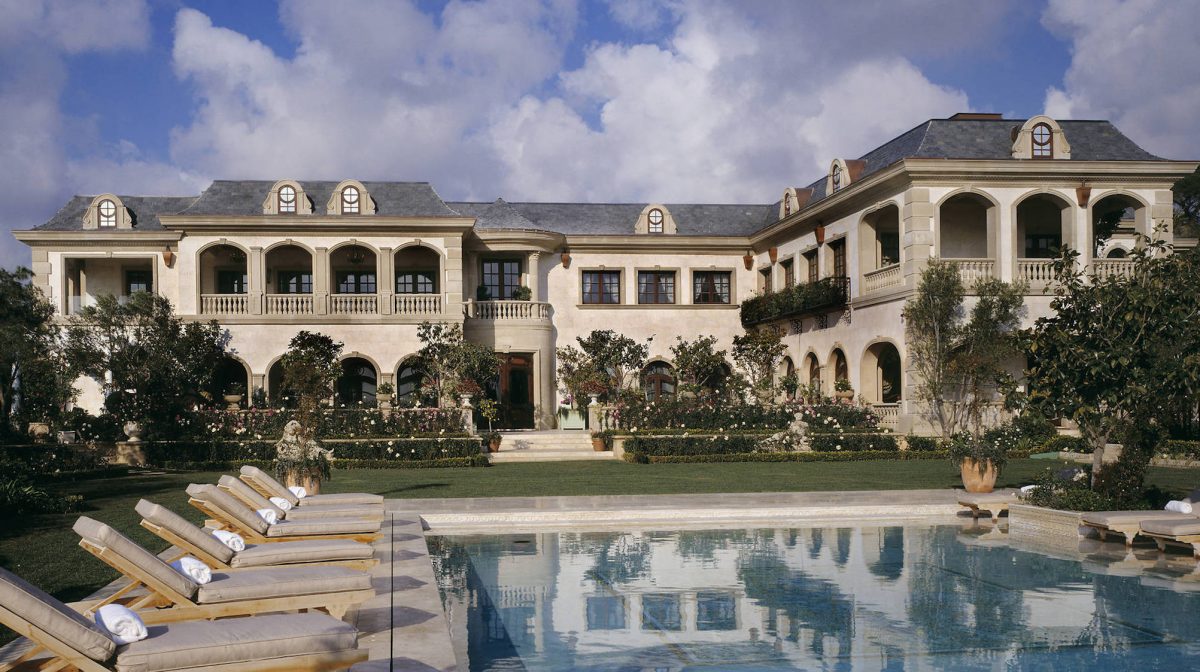 At the dawn of this decade, the U.S. was reeling from a real-estate crash and the worst economic downturn since the Depression. Home prices in some regions were starting to recover, but it seemed impossible that values would return anytime soon to their dizzying boomtime highs.

Few could have predicted that within a few years, the luxury market would not only recover but reach a staggering new height. A tidal wave of global wealth poured into U.S. real estate after the 2007-09 recession, creating in the 2010s a new segment of the market: ultraluxury homes targeted at the global billionaire elite.

Pricier and more lavish than anything that came before them, these homes had outsized amenities such as commercial-grade hair salons, hotel-worthy spas and home theaters with concession stands. As the extreme became commonplace, homeowners began to add more attention-grabbing features, such as shark tanks and private nightclubs.

Meanwhile, luxury-condominium buildings grew taller than ever. Standing 1,550-feet high with 131 stories, Central Park Tower in Manhattan is now the tallest residential building in the world.

Today, because so many buyers are wealthy enough to withstand the most severe economic swings, this new sector largely acts independently from the broader real-estate market. So while the number of sales are falling in many luxury markets across the country, six homes in the U.S. have closed for $100 million or more so far in 2019—the highest number for a single year. In 2010, there were none. That year, the highest sale price was $50 million (plus about $2 million of furnishings) for Le Belvedere, a Bel-Air mansion with a swan pond and a ballroom that could seat more than 200 people.

“People don’t realize that there are two markets happening in the world,” said Oren Alexander, an agent at Douglas Elliman Real Estate. “We’ve been hearing that things have slowed down, and that’s true—no doubt about it. But the unique, one-of-a-kind, top-notch product? That market is doing better than ever.”

Home sales of $50 million or more used to be an anomaly, with two or less each year in the early 2000s, according to Miller Samuel, a residential appraisal and consulting company. In 2014 that figured spiked to 23, and hasn’t fallen below 12 since.

In Los Angeles, the average home-sales price soared 153% to $2.5 million between the third quarter of 2009 and the same quarter of 2019, according to Miller Samuel. Florida’s ritzy barrier island of Palm Beach saw its average home price surge 77% in that same period, while Miami’s jumped 72%. Manhattan, which has stumbled in recent years, still had an average sales price of $1.65 million in the third quarter, 25% higher than the same quarter 10 years earlier.

A decade that will be remembered for its excesses, the 2010s saw the first-ever condo sales topping $100 million, then $200 million. In the 2010s billionaires bought not just one, but multiple $100 million-plus homes for themselves.

Some buyers paid tens of millions of dollars for houses, only to raze them and build brand-new mansions in their place. They bought newly constructed, multimillion-dollar condos and gut-renovated them, putting existing high-end finishes out with the trash. They upholstered their walls in red leather from the uber-luxury handbag brand Hermès. The youngest members of the family got playhouses that cost more than conventional homes.

The postrecession flood of buyers has now slowed, and far more home sellers seek nine-figure price tags than actually achieve them. Still, it is clear that ultraluxury sales are now a fixture of the marketplace.

The $100 million sale “is now a thing,” said real estate appraiser Jonathan Miller of Miller Samuel. “This will not go away.”

In the 2010s, hedge-fund billionaire Ken Griffin poured at least $820 million into home purchases in New York, Palm Beach, Chicago and London. Since 2011, Facebook CEO Mark Zuckerberg has spent at least $250 million on real estate. Embattled WeWork founder Adam Neumann has paid about $90 million for six homes since 2012, including a California estate with a guitar-shape living room. Natural gas billionaire Michael S. Smith paid $110 million in 2018 for an oceanfront compound on Malibu’s Carbon Beach. What Mr. Smith paid is more than 1,500 times the U.S. median household income for that year, or $63,179, according to census data. It’s enough to buy 550 Ferraris, or more than 450 houses priced at $243,225, the current median value of a home in the U.S.

“These are numbers that mere mortals don’t pay for housing,” said Mr. Miller.

How did we get here?

Back in 2010, Uber and Airbnb were fledgling startups. Instagram had just launched. Many people used Amazon.com primarily for buying books. Many tech companies have seen expansive growth since then, yielding massive amounts of wealth for their founders. Meanwhile, vast fortunes were created in emerging economies across the world, such as China, Russia and Brazil.

“Over the last 10 years, we’ve seen a recovery from the financial crisis and a long boom in stock prices,” said Maya Imberg, director of Thought Leadership and Analytics at Wealth-X. “That’s pushed up the overall amount of wealth in the world.”

This generation of affluent people has eagerly purchased luxury real estate in their home countries and around the world to diversify their assets or escape political instability at home, said Liam Bailey, head of Knight Frank’s residential-research team. “Wealth has become much more mobile,” he said. “The new wealth that has been created in emerging markets in particular has a very global outlook.”

Today, he added, international ultrahigh-net-worth individuals typically have at least three or four homes in multiple cities outside their home country. With interest rates low after the financial crisis, “investors were running around the globe investing in real estate as a way to generate higher returns,” Mr. Miller said. “It was a frenzy.”

A key turning point came in 2012, when former Citigroup Chairman Sandy Weill sold his penthouse at Manhattan’s 15 Central Park West for $88 million—roughly twice what he had paid for it in 2007—to Russian billionaire Dmitry Rybolovlev. That deal “opened up a whole new echelon of what could be,” said Corcoran chief executive Pamela Liebman.

With land prices high and credit tight in the wake of the recession, developers buoyed by investment dollars built almost exclusively high-end product, Mr. Miller said. The result was an “explosion of luxury new builds” in cities such as New York, London and Los Angeles, said Mr. Bailey, reversing an earlier trend where buyers would pay a premium for established, old-money buildings. “It almost created a brand-new marketplace.”

In Manhattan, for example, new-construction luxury towers like One57 sprang up on what is now called Billionaires’ Row, taking advantage of new technology to build taller buildings than ever before as they competed to lure wealthy international buyers. “You’ve got this arms race between developers, who are using architecture and design to stand out from the crowd,” Mr. Bailey said. “You end up with these incredible buildings.”

In 2014, tech entrepreneur Michael Dell set a new Manhattan record when he bought a condo at One57 for $100.47 million. In 2015, an investor group led by billionaire hedge-fund manager William Ackman paid $91.5 million for another unit in the same building. In 2017, an unknown buyer paid $91.1 million for a penthouse at 432 Park Avenue, a nearly 1,400-foot-high tower on Billionaires’ Row.

The past decade will be known for redefining luxury, as developers sought to wow buyers by piling on the most over-the-top features. “The amenities have doubled and quadrupled,” said Manhattan real-estate agent Richard Steinberg.

It was the decade when sellers put homes on the market with Lamborghinis, Warhols and Picassos included in the asking price.

It was the decade when Miami’s Porsche Design Tower was built with glass-walled garages adjacent to the units and accessed by a specially designed car elevator, allowing residents to park just outside their apartments, even 60 stories in the air.

In 2017, a Beverly Hills spec house was listed for $100 million with a Champagne vault filled with 170 bottles of Cristal, and a full-time house manager whose salary had been prepaid for two years.

That same year, a Los Angeles spec house dubbed Billionaire hit the market with two fully stocked wine cellars, a candy room filled with treats from Dylan’s Candy Bar and an elevator clad in crocodile skin. The lower level had a four-lane bowling alley with bowling shoes in various sizes. The house sold this year for $94 million.

In Boston, the under-construction St. Regis Residences will offer buyers personal butler service and the option of having a watch-winder in the closet. “Always reliable and faithful, your butler will come to understand your exact preferences and even anticipate your needs,” the website boasts.

Features now routine in high-end properties, like home automation systems, weren’t long ago considered “super luxury and unattainable to the average person,” said real-estate agent Catherine Marcus Bassick. “What defined luxury in 2009 is not the luxury we would describe now.”

The post The Decade of the Uber-Decadent House appeared first on Real Estate News & Insights | realtor.com®.