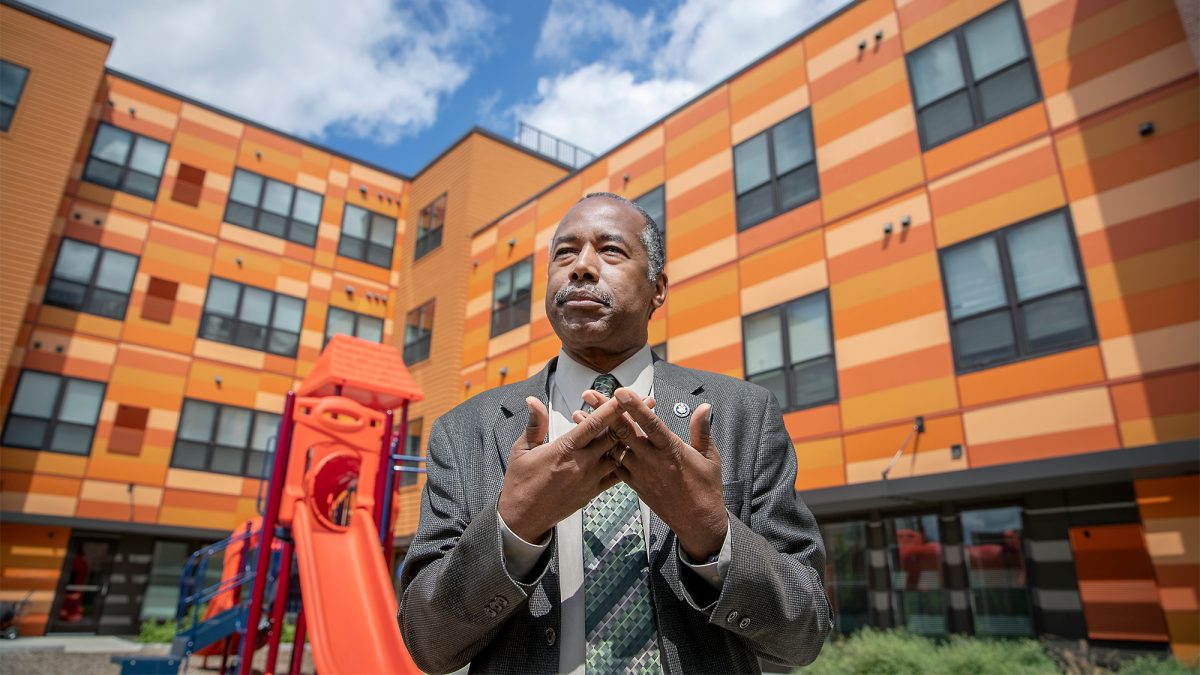 Housing chief Ben Carson says he is committed to tackling the affordable housing crisis that’s reached a fever pitch in many parts of the country. His first step? A nationwide bus tour.

The secretary of the U.S. Department of Housing and Urban Development kicks off his tour on Wednesday in Louisville, KY. The purported aim of Carson’s Driving Affordable Housing Across America journey is to talk to local officials, builders, and just about everyone else about ways to loosen state and city regulations that make it harder, costlier, and longer to construct housing.

Reducing “overly burdensome” regulatory barriers to putting up housing is a priority of Carson’s boss, President Donald Trump, and Carson heads up a White House council dedicated to the task.

“It’s important that we get out into local communities and hear directly from our fellow citizens who are grappling with rising housing prices and learn more about best practices to address them,” Carson said in a statement. “Families, businesses and all levels of government have concerns about the rising cost of housing, and this is an opportunity to bring those parties to the table for a discussion about how we can work together to fix the problem.”

HUD has not released the number or location of the stops on the controversial tour. It will run through June.

But in an election year where nearly all of the major Democratic presidential candidates have released comprehensive affordable housing plans, many critics believe the multistop bus trip is little more than a publicity stunt. And they say that although reducing regulatory barriers will help to alleviate the dearth of affordable housing, it’s just one of many steps needed to turn the crisis around.

The bus tour is “really unnecessary,” says Edward Goetz, an urban policy professor at the University of Minnesota in Minneapolis. “HUD has been collecting this information for a long time, and they don’t need a bus tour to do it.”

Others applauded Carson’s willingness to talk to local leaders grappling with this crisis in a bid to find solutions.

“He’s getting out of [Washington,] DC, and actually going to look at communities and examples where maybe they’ve successfully tackled affordability,” says K.C. Conway, director of research at the Alabama Center for Real Estate at the University of Alabama in Tuscaloosa. “It might give him some good takeaways.”

Conway also praised Carson’s desire to use the carrot—instead of the stick—to get state and local officials to loosen regulations to create more housing.

“A lot of [the regulations] emanate from this ‘not in my backyard’ [ethos],” says Conway. “There’s a stigmatization with affordable housing. They think it’s going to bring crime and undesirable [new residents] to their communities and it won’t be good for their property values.”

What is the solution to the affordable housing crisis?

Everyone seems to have a theory on the best ways to address the affordable housing crisis.

University of Minnesota professor Goetz would like the government to produce more subsidized housing and offer more programs to help the lowest-income folks secure a roof over their heads. These could include tax breaks, subsidies for developers and builders, expansion of the Section 8 program for the poorest of the poor, and creation of more federally subsidized housing.

“The size of the affordable housing crisis is so great, we have to do everything,” says Goetz. “It’s foolish that [reducing regulatory barriers] by itself is the solution. And it seems to be all we’re getting from this administration.”

Andrew Aurand, vice president for research at the National Low Income Housing Coalition, would like fewer regulations prohibiting rental apartments from going up. He’d also like to speed up the time between builders submitting proposals to construction and the shovels going into the ground. (Proposals can sometimes get lost in a series of zoning board meetings.)

“Addressing regulatory barriers is important, but it cannot be used as an excuse to not sufficiently invest in our housing programs that serve the poorest families,” says Aurand. “This administration that is planning this road tour … at the same time consistently proposes cuts to the programs that serve our lowest-income renters.”

Most experts agree that not all state and local regulations are bad. Some are important for public safety and protecting the environment, says Ken Chilton, a public administration professor at Tennessee State University in Nashville. And some of these regulatory costs fund necessary infrastructure, new roads, and schools to accommodate the folks moving into the new housing.

Chilton isn’t convinced that if the regulations were removed, builders would suddenly start building cheaper homes.

“The data doesn’t support that,” he says.

“It’s certainly a step in the right direction,” Weicher says.