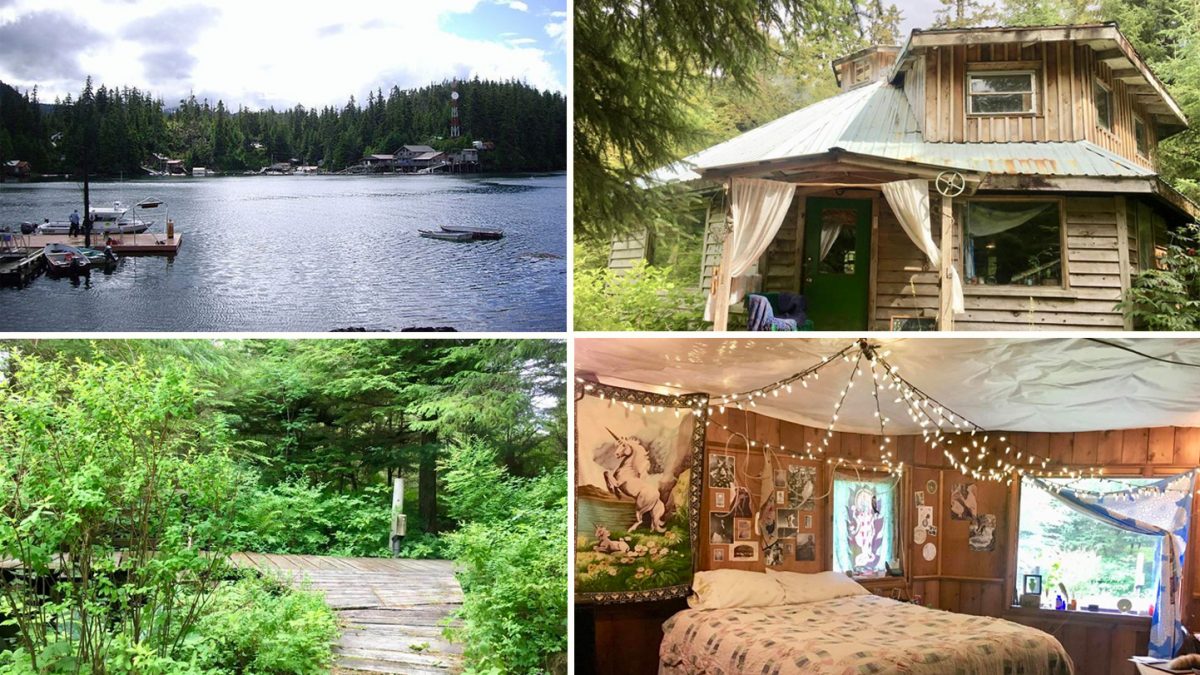 There’s getting away, and then there’s going entirely off the grid.

Port Protection, AK, is a tiny town (population 100) along the southern edge of America’s largest state, where harsh winters put its residents to the test. If this kind of isolated life appeals to you, you can consider the single listing in the town on the market for $120,000.

But beware: This way of life isn’t made for those who like their morning Starbucks.

“It doesn’t work for everybody,” says listing agent Melissa Matecki. “It’s people who take a lot of pride in doing things, as opposed to having things. But it works really well for the right type of person.”

Folks drawn to the area might include “adventurous people who want to live life on their own terms and don’t want to get caught up in the rat race and the hustle and bustle,” says Matecki.

The town was made famous in 2015 thanks to “Port Protection“—a National Geographic reality TV show about the frigid cove. After a five-year hiatus, the show is back and has been rebranded as “Life Below Zero: Port Protection.” But the subject matter remains the same: resilient residents who weather a very nontraditional lifestyle of challenges.

One listing available in Port Protection

As for the $120,000 residence available for one hardy buyer, it’s the home of a native son.

Homeowners Kalon Jones (who grew up in Port Protection) and wife Gina Jones, who have a new baby, aren’t in Port Protection right now, but they plan to return in the summer. They also own another property in the community.

Calling the difference of seasons “night and day,” Gina says the show is accurate—to a point. But it shows life only during the bitterly cold and isolating winter months.

“In the summertime, it’s one of the best places you can imagine being,” says Gina, who has hosted fans of the show. She’s noticed an uptick in tourism during the more temperate seasons.

Port Protection is located at the northwest tip of Prince of Wales Island and can be accessed only by boat or seaplane in the warmer months. The tiny town has one general store, Wooden Wheel Cove Trading Post, which also doubles as a post office.

Amazon deliveries (with free shipping) are available for canned goods and nonperishables like dog food. Grocery stores in nearby cities will also deliver by plane (shipping is $1 per pound). Deliveries can be picked up at the trading post, but you’ll need a vehicle to cart them home.

The home for sale is about 400 feet from the beach, and a boat dock is about a half-mile away, Gina says.

Home for the hardy

“People who call [about the listing] don’t really know what they’re in for,” Matecki says. “They have the wrong idea. It looks cute. They get excited, but they’re also daunted.”

The adorable cabin sits on 1.29 acres and is located next to a community garden. The cabin measures 1,800 square feet and has three bedrooms and one bathroom. It features a vaulted ceiling and a greenhouse on top. The property receives water from the city and has a running tap in the kitchen and bath. The grounds also come with a fire hydrant.

However, the hot water isn’t working, and given the extreme cold during the winter months, that’s a top priority for an immediate fix. Some roof and foundation updates may also be needed. On the plus side, there are no property taxes.

Heat comes from a wood stove, and the cabin comes with cold storage. Landline phones and satellite internet can also be set up.

The sellers are willing to leave the place furnished. Needless to say, any potential buyer should be a DIY type who knows how to navigate the waterways.

Can you weather the winter?

During the winter, planes can’t land and a month can easily fly by with no supplies coming in.

“You really have to stock up,” Gina says. “It’s just one of those things of living out there in the wintertime, it’s really isolating. You have to be hardy. You have to be able to withstand bone-cold conditions.”

And to be clear, there are no cars, only a plank boardwalk throughout the town, which is located in a rainforest.

“It’s like living in ‘Water World,’” Gina says. Boats are the primary means of transportation, and residents motor to the dock to pick up supplies and get around. Although there has been a school in the past, right now there are only two babies in town, she adds, and no children to keep a school open.

There is a road which sits within a five-minute boat ride of Port Protection, and residents can keep a car or truck at the end of the road, which is open only during the summer.

If you can make it through the winter, the summer months are your reward.

Gina says most residents spend the warmer months foraging and fishing to stock up for the winter. Wild blueberries, huckleberries, and many types of mushrooms are ready to be picked. Beach asparagus and line-caught salmon are also plentiful.

“It’s incredibly abundant with wild food,” Gina says. “You stock up with meat you gathered, duck, fish, crab, halibut, deer,” which is all stored in a chest freezer.

“My biggest piece of advice is [live] there in the winter,” Gina says. “If you’ve survived and you think you want to do that, then Port Protection would be a good place for you. Or you can do what we’re doing and spend the summer out there. It’s a super, awesome place to be.”

If either the sunny summer or the harsh winter sounds like a bit much, we have great news. You can simply sit on your couch and watch the show.

The post Checking in on the Reality of Life in Port Protection, AK appeared first on Real Estate News & Insights | realtor.com®.