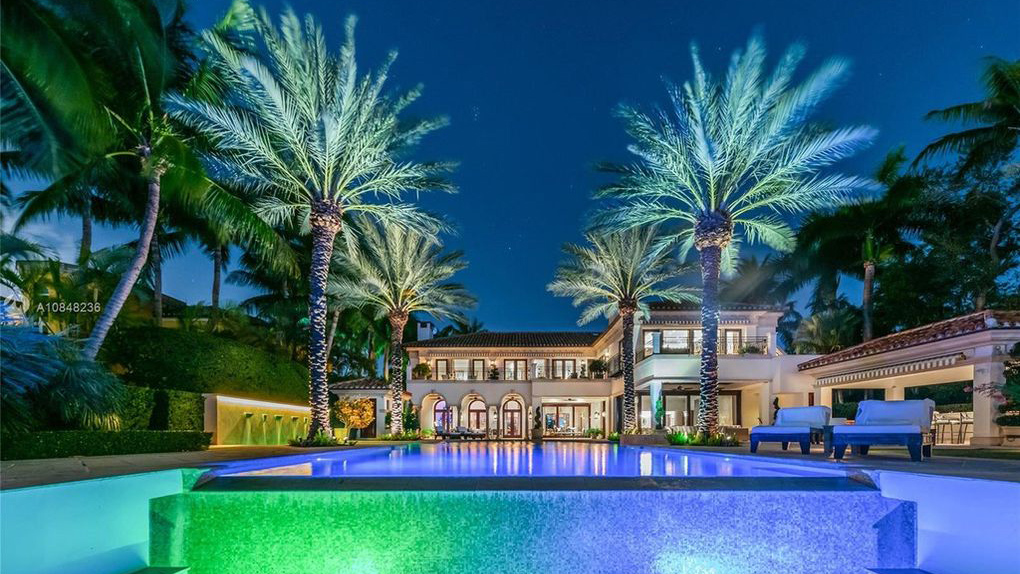 A contemporary waterfront estate on Florida’s ultra-exclusive Star Island has floated onto the market for $40 million. The top-tier price tag makes the Miami Beach property this week’s most expensive new listing on realtor.com®.

The 14,762-square-foot luxury mansion on the guard-gated island last sold in 2011 for $25.5 million. At the time, it was one of the most expensive Miami Beach residential sales ever.

Post-purchase, the new owners remodeled and expanded the residence. According to the listing agent, Jill Eber with Coldwell Banker Realty, they added a professional chef’s kitchen, another bedroom, a home office, and a laundry facility.

The property is held by an opaque Delaware corporate entity (E&A Estates), and the elusive owners are now ready to sail away from the waterfront retreat, which comes with 100 feet of water frontage and a wood dock. Eber told us that the sellers live overseas and don’t spend as much time in Miami as they used to.

“It’s the most sought-after view that you have in Miami. It’s direct bay, out to the downtown skyline,” Eber says.

She adds, “Everybody’s looking for the best of the best location. That is what this is. And then, the house itself is beautiful. It’s a trophy property.”

Along with those Biscayne Bay and Miami skyline views, the spacious spread contains 10 beds, 10.5 baths, a living room and formal dining room, a chef’s kitchen, library/den, wine room, and a great room that opens to the pool area.

Upstairs, the master suite features a sitting room, office, and two large terraces, plus a bathroom with an onyx and glass steam shower, a walk-in closet, and custom spa tub.

Other luxe interior details include stone floors, Venetian plaster walls, and an elevator.

On the almost 1-acre lot, the manicured grounds include a pool with a hot tub, cabana bath, covered bar, and multiple seating and sunning areas.

The current listing is at the top of the price point for the island, but it joins several other properties on the exclusive Miami Beach enclave that are up for grabs.

A renovated 1920s villa that came on the market in 2016 for $65 million dropped to $40 million last year. Each time it was listed, the estate was named our most expensive listing of the week. The property is still available.

In one more note, the singer Gloria Estefan has had a home on the market for years, first listed in 2015 for $40 million, now available for $32 million. She and her husband, Emilio Estefan, live nearby, and initially bought the place for Emilio’s mother. After her death, the couple rented out the property before deciding to sell it.

Considered one of the most sought-after locations in Miami, Star Island has attracted many A-listers to its shores, including Cher, Jennifer Lopez, and Ricky Martin.