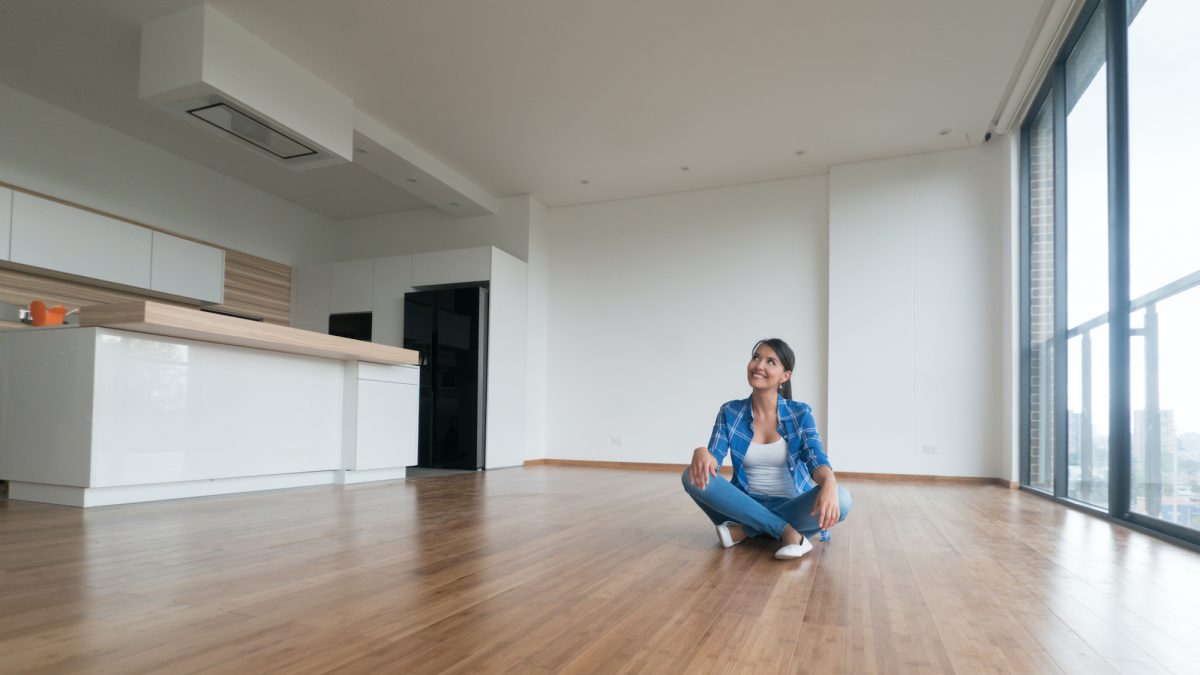 You’re on a Zoom call for work and the kids are frantically racing around the sofa where you’re stationed. You’re trying to relax while reading a book in the living room, but your roommate is cranking Netflix and chomping on nachos. And going out for a walk in the city streets is no stress reliever. Far from it!

It’s been a long spring and summer, in which most of us have spent way too much time indoors—and longing for more space. These days, the idea of a home office or backyard playground sounds just as exciting as a hot new neighborhood bar or tropical vacation used to be.

So we decided it was the perfect time to crunch the data to find out where in America you can get the most house for your money. Because, as we learned from a recent realtor.com survey of home shoppers, buyers’ most-wanted home feature in this age of COVID-19 is more space—indoors and out. We’re here to help, friends!

“With many working from home now, it’s nice to have space to separate from children, spouses, or roommates to get some quiet and focus,” says Danielle Hale, chief economist for realtor.com®. “Even if you’re not contending with others at home, having extra space can enable you to change your scenery to give you the fresh perspective you need to tackle challenges.”

But if the last housing collapse taught us anything, it’s that overleveraging—especially in a recession—is never a good idea. Fortunately there are plenty of U.S. cities that offer home buyers expansive space at an affordable price.

To figure out where wannabe home buyers can spread out without draining their life savings, the data crunchers at realtor.com looked at the median list price per square foot in the top 100 metros to find the ones that offer the most beds and baths for the buck. (Metro areas include nearby suburbs and smaller towns.) To keep it diverse, they capped the rankings to one place per state.

Youngstown is home to the world’s top business incubator—and the most affordable real estate of any metro in the nation. About 67% of locals can afford to buy a median-priced home in town.

It seems like those locals are taking advantage of the prices right now, as the market has been scorching hot, according to Gina Shutrump, vice president and managing broker at Howard Hanna Real Estate.

“Even homes that were never as desirable due to school districts are selling as long as it has the right colors and updates,” she says. “They want it done, and they’re paying over asking.”

Though the city proper isn’t quite as popular with buyers due to limited inventory and high crime rates, in suburbs like Canfield and Salem, buyers are gravitating toward remodeled abodes with swimming pools—which were considered a liability in the pre-COVID-19 times. They include this three-bedroom ranch on a 2-acre lot listed at $199,000 and this large four-bedroom listed for $199,900.

It’s no secret that Steel City offers some serious real estate steals. In scorching-hot neighborhoods like Polish Hill, buyers have been snapping up sweet-sized homes with nice yards, like this 2,000-square-foot, fully renovated three-bedroom Colonial for $472,500, within walking distance to the Strip District and downtown.

However, since the novel coronavirus showed up, demand has shifted to the burbs. Space seekers have become increasingly interested in the rural towns to the north of the city, where one can purchase a house on multiple acres of land just 30 minutes from downtown. The options run from $200,000 to $5 million, but you could get this $215,000 four-bedroom on nearly 10 acres in Economy and this three-bedroom ranch on 5 acres in desirable Sewickly for $599,000.

“People want to be on the front porch and not see the neighbors,” says Bobby West, real estate agent with Coldwell Banker Pittsburgh.

No matter which way you look, it’s not hard to find a large home in this former cow town.

From the century-old mansions listed on the National Register of Historic Places in College Hill (like this four-bedroom, 4,000-square-foot Victorian for $399,000) to larger homes erected in the mid-2000s in Wilson Estates (like this five-bedroom with a decked-out family room in the basement for $509,900), Wichita offers buyers serious space at a fraction of the price of similar cities. Plus, it’s got great museums, restaurants, breweries, and attractions such as the seventh-largest zoo in the United States.

And for buyers who don’t mind being farther from the center of town can score even better deals 25 minutes east in Andover, where a 3,000-square-foot house with four bedrooms and a rec room can be had for $327,900—or even less.

Californians and Midwesterners have been packing up the minivans in droves and migrating south to this family-friendly border town. The population has increased 9% in the past decade, with a staggering 30% of the city’s residents being under the age of 18.

Why the surge? Aside from its close proximity to the serene beaches of South Padre Island, McAllen offers families plenty of room to spread out without having to fork over the kids’ entire college fund. For just $249,000, one can buy a six-bedroom—yes, six!—home on 1.42 acres, and if you’re willing to put in some elbow grease, it’s possible to purchase an even bigger four-bedroom on nearly an acre for as little as $190,000.

South Carolina’s state capital boasts a thriving cultural scene (in non-COVID-19 times) and a diverse job market with opportunities ranging from global companies like Blue Cross Blue Shield, educational and administrative positions at the University of South Carolina, as well as roles at a large military base and state and local government.

Unfortunately, the city also has a high crime rate—ranked as the 25th most dangerous city in the U.S.—so a lot of families tend to gravitate toward burbs such as Lexington and Elgin. The latter is a popular pick for folks who work at Shaw Air Force Base or just want to keep horses out back. There, buyers seeking land can pick up a three-bedroom house on an acre for around $229,900 or a sprawling three-bedroom on three-quarters of an acre just outside of town for $300,000.

“It’s kind of a rural town, yet only five to 10 minutes away from Columbia,” says Sherry Chesnutt with Coldwell Banker Residential.

Little Rock has no shortage of affordable land for those who want to custom-build their dream abode—and there are plenty of deals on already built giant homes.

“New construction is selling high, but mansions built five, 10, 20 years ago are selling for next to nothing,” says iRealty Arkansas real estate broker Chase Rackley.

That’s why this four-bedroom with an office and game room less than 20 minutes from downtown is on the market for just $374,900, and this newer Craftsman-inspired four-bedroom on 5 acres in the middle of town is listed for $594,900. Just think about all the places you can hide from the S.O. and kids with a set-up like that!

You’d think the hometown of the prestigious Masters Tournament would be exorbitantly expensive, but it’s actually not.

The historic city on the banks of the Savannah River, halfway between Atlanta and the coast, is one of the most affordable metros in booming Georgia. Hopefully, someday residents will again be able to enjoy its lively downtown shops, restaurants, and bars.

In the meantime, there’s still a well-maintained stock of affordable homes. Right on the walkable “Hill,” buyers can get into a fully updated three-bedroom Colonial with a large yard for $295,000. In nearby Woodlawn Historic District, it’s possible to buy an even larger four-bedroom Dutch Colonial for $215,000. Those sweet front porches are just begging for a socially distant neighborhood happy hour.

Ever dream of living in a palatial mansion befitting an oil baron? No, you still probably can’t afford one of the many Rockefeller estates in the Northeast or a Getty ranch in California. But it is possible to take over a bespoke mansion built by the richest oil families of the 1920s and 1930s in the former Oil Capital of the World for less than $1 million.

Tulsa’s historic Midtown neighborhood offers stunning Colonial, art deco, and traditional homes on large lots, including this $725,000 four-bedroom, on prestigious streets for less than the cost of a tiny home in upscale enclaves like New York’s Westchester County or Malibu, CA. And for those who can’t take out a jumbo loan, it’s possible to land a large home and yard in the coveted hood such as this four-bedroom ranch, listed at $374,900.

Since Syracuse began pumping money into its former industrial center in the early 2000s, overhauling what had been crime-ridden neighborhoods into safe communities with all the amenities needed to attract recent college graduates, its remodeled condos became the home of choice for many young professionals and empty nesters.

But the increased demand for single-family homes has made a tight housing market even tighter. The university town consistently ranks as one of the most affordable and fastest-appreciating metros as well as a top place to buy a starter home. While a lot of sellers aren’t ready to have strangers walking through their homes right now, buyers with a bit of patience can still jump on the mind-boggling deals that do pop up.

On the desirable Northside in elegant Sedgewick Hills, this five-bedroom brick Colonial with studies and dens—yes, plural—is on the market for $279,000 and, a short drive away, this large four-bedroom California bungalow is going for just $184,900.

Indianapolis is known for its iconic motor speedway and its world-class zoo, but it really should be hailed for its incredible real estate. All across Indy, buyers can find nice-size homes that could make coastal denizens forget about the beach. In the thriving Herron-Morton Place neighborhood, house hunters can pick and choose from gorgeous historic homes for less than the price of a tiny co-op apartment in Boston, New York City, or Washington, DC.

This fully renovated three-bedroom with a third-floor office is on the market for just $465,000, and those who want it all right in downtown can snap up this sprawling Frank Lloyd Wright–inspired, six-bedroom estate with a home gym, sauna, and two-story living room for $1,750,000—you know, the same amount that’ll get you a condo in San Francisco.

“We have a low cost of living,” says local real estate broker Melanie Scheetz, of Century 21. “You get a larger house with a smaller dollar.”

The post Breathing Room: Where Home Buyers Can Get the Most Space for Their Money appeared first on Real Estate News & Insights | realtor.com®.