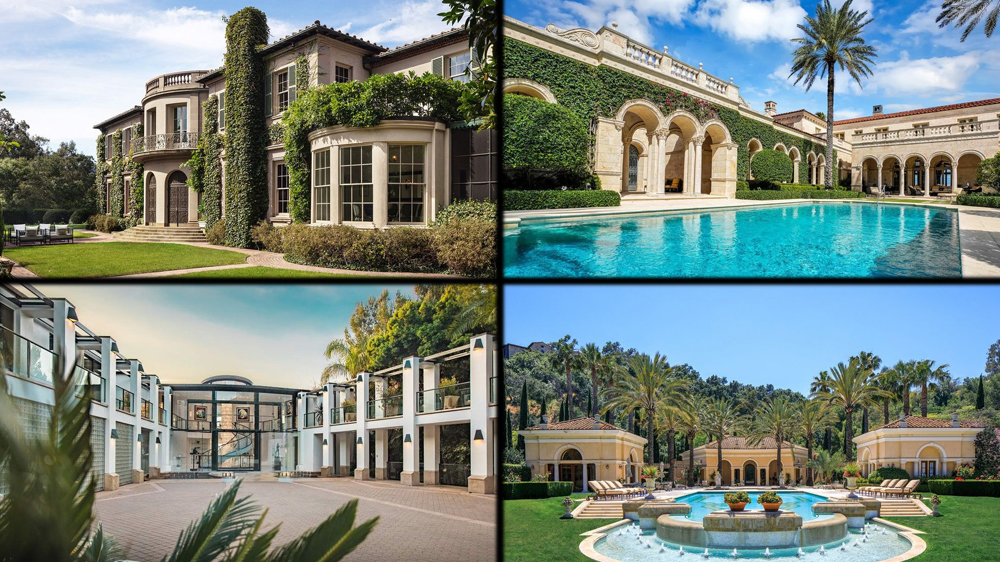 These days, we’re all in on guilty pleasures.

In search of dreamy real estate, we cast our eyes to the apex of the market—the rare air of America’s most expensive homes on the market right now.

When we last looked in summer 2019, the nation’s most expensive home was Chartwell, the renowned Bel-Air estate, priced at $195 million. However, it’s no longer on our list, thanks to its $150 million sale late last year.

It’s a new cast of eye-popping places, with a few familiar faces from our sojourns into seriously expensive mansions.

And while it may seem counterintuitive to have a $100 million-plus listing on the market at this moment in history, the time might be exactly right for a rarified group.

Major pieces of property with lots of land and high-end amenities are quite appealing in this era of sheltering at home. And what better way to encase yourself in a bubble than in one of these 10 regal residences?

Scroll on down for a full look at the priciest properties for sale in America.

Price: $160 million
Posh particulars: If you’re going to spend the price of a small town on a single property, then that’s what you should get, right? Villa Firenze bills itself as an “authentic Italian village.”

Seven years in the making, the property is the “largest assemblage in Beverly Park.”

Set on 9 acres and accessed by its own street, the gated compound includes a 30-car courtyard, surrounded by 40-foot-tall palms. The setting will make you think you’ve been transported to Europe. The 20,000-square-foot mansion, designed by William Hablinski Architecture, has 20 beds and 23 baths.

The interior boasts “every possible amenity,” including high ceilings, large formal gathering spaces, and arched doorways. Out back, there’s 4 landscaped acres, which include a pool and pool house, two-story guesthouse, tennis court, and a walking/jogging trail. Not enough space? A separate lot comes with room for additional development.

The area is home to such celebs as Mark Wahlberg and Eddie Murphy. This pricey property is reportedly owned by the CEO of Air Lease Corp., Steven F. Udvar-Házy, and his wife, Christine. The couple listed the mansion three years ago for $165 million. The price was reduced this month.

Price: $150 million
Posh particulars: Get out of the city and head to the Hamptons! With this spread, you can bring your entire extended family. It’s been on the market for three long years, but hasn’t attracted a billionaire buyer, yet.

The sprawling coastal property was purchased in three separate transactions, and the buyer had big plans to build a family compound. Instead, he placed the entire property back on the market in 2017 for $150 million, where it has sat ever since.

Price: $137.5 million
Posh particulars: Called Gemini and owned by the wealthy Ziff family, the 15-acre, ocean-to-lake estate comes with some 1,200 feet of dune-lined beach. It is the only home on the beach for miles.

You’ll never need to leave the premises. The recreational perks include a swimming pool, PGA-standard golf area, regulation tennis court, half-basketball court, fitness center, and spa. Paths lead to the ocean and the lake, which features a dock and pier.

It made a splashy debut in 2016 with a whopping $195 million list price. The price was reduced by $30 million the following year. It was reduced to its current price in 2017.

Price: $125 million
Posh particulars: Built by country singer Kenny Rogers, who died in March, the home was designed for a celeb lifestyle. Rogers was reportedly fined $2 million for installing a funicular that goes from the cliff to a beach cabana. It’s not our money, but we say it was worth it!

The 3-acre property is located in Malibu’s Paradise Cove. It includes a main house, guesthouse, pool, and 256 feet of beach frontage. The current owner is Diana Jenkins, founder of the health drinks company Neuro Drinks, according to the Wall Street Journal.

Price: $125 million
Posh particulars: This storied home was once owned by newspaper magnate William Randolph Hearst and his mistress, the actress Marion Davies. The estate also served as a destination on Jacqueline and John F. Kennedy‘s honeymoon, and later, as Kennedy’s West Coast presidential election headquarters. The iconic mansion also appeared in “The Godfather” and “The Bodyguard.”

The legendary home set on 3.5 acres has 18 bedrooms and 22.5 baths. The grounds include walkways, fountains, waterfalls, a tennis court, as well as a swimming pool and pool house.

Known as the Beverly House, the property was stuck in a “tangled financial web” in 2016. It’s bounced on and off the market for a few years and was priced as high as $195 million in 2016. It was relisted two years ago for $135 million.

Price: $115 million
Posh particulars: What a difference three years makes. The Holmby Hills home dubbed Owlwood flew onto the market in 2017 for a hefty $180 million. The price has since been reduced by 36%.

Designed by architect Robert D. Farquhar in 1936, the European-style estate is set behind tall hedges and includes 10 acres of rolling lawns, a tennis court, pool, and pool house.

The 12,000-square-foot residence has 10 bedrooms and nine baths. According to the listing, the property is the largest compound in Holmby Hills and comprises three contiguous lots, which offers a buyer “endless opportunities.”

Renderings of a modern mansion with luxurious finishes and a sleek interior suggest what the next owner could do to bring it into this century.

Price: $115 million
Posh particulars: While the Mar de Amor, or Sea of Love, built in the 1990s, offers plenty to like, it may not be what comes to mind when thinking “beach house.”

The 10,646-square-foot modern residence set on 2.5 acres comprises two wings that face each other. They’re connected by a two-story entry with a floor-to-ceiling chandelier, a spiral staircase, and walls of windows. It first surfaced on the market in February.

The 12-bedroom, 14-bathroom home features an open floor plan. Out back, the dramatic infinity pool seems to float over the coastline. There’s also a tennis court, eight-car underground garage, and private beach.

Price: $110 million
Posh particulars: Located on Billionaires Row, this Mediterranean-style mansion on 2 acres is about a half-mile south of President Donald Trump’s Mar-a-Lago. The owners purchased the property in 2001 for $17.7 million, knocked down an existing home, and custom-built this oceanfront estate.

Called Pietra Mare, it first came on the market for $109.5 million in 2018. It was recently relisted with a slightly higher price tag.

Landscaped grounds include a pool and spa, guesthouse, and 170 feet of beach frontage. There’s also covered outdoor space for dining and lounging.

Originally a land grant from Carlos III, the King of Spain, the breathtaking property includes hillsides, coastal meadows, orchards, and grassland, along with farmlands and a cattle range. The secluded property is close to the affluent hubs of Santa Barbara and Montecito.

There’s a full-size basketball court, as well as a wellness center with a 75-foot indoor lap pool, a sauna, steam room, and gym.

To relax, there’s a 36-seat home theater, wine cellars, and a recording studio.

If you’d like to kick back outside, there’s a resortlike yard, multilevel patios, infinity pool and spa, weather-proof Samsung wall, and kitchen. You can easily host guests with eight bedrooms, 21 bathrooms, and a 20-car auto gallery.

The post $100M-Plus Club: The 10 Most Expensive Homes in the U.S. appeared first on Real Estate News & Insights | realtor.com®.