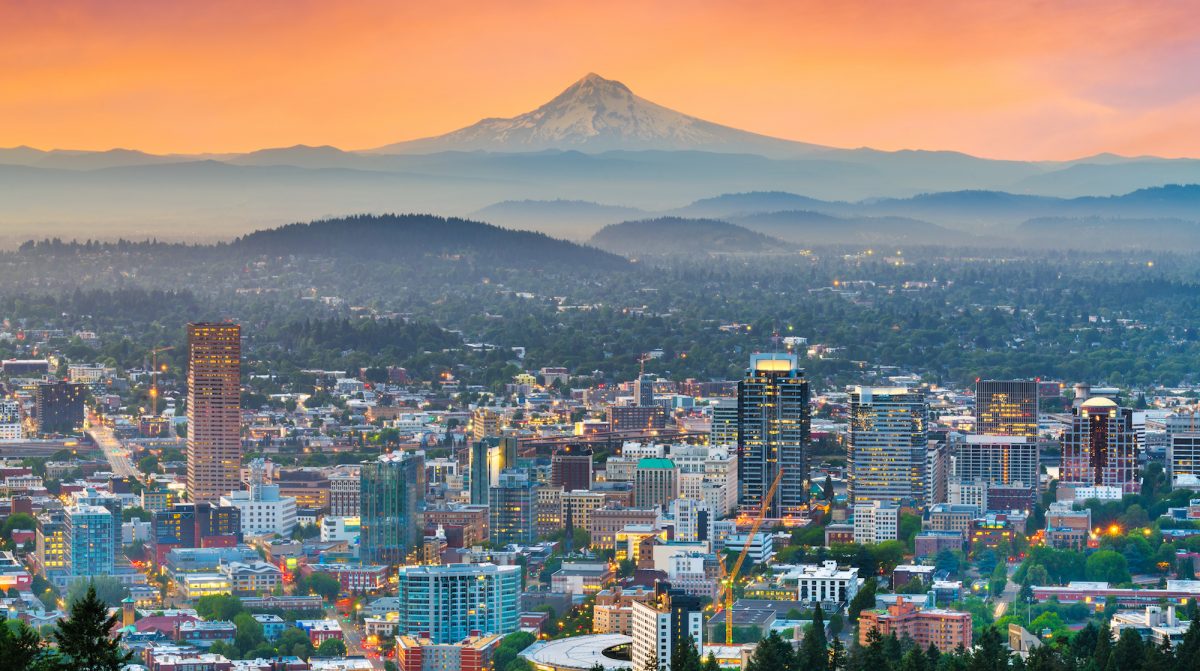 Over the past few years, Portland, OR, has emerged as an epicenter of hipster cool and one of the nation’s hottest housing markets. Lower home prices and a thriving startup scene lured cost-conscious residents from pricier Seattle as well as San Francisco and other California cities.

More recently, Portland has been in the news for something else entirely: persistent and highly volatile protests in support of Black Lives Matter. Federal agents dispatched there by President Donald Trump in July to keep the peace have themselves been accused of civil rights violations and inflaming tensions.

Oregon Gov. Kate Brown announced on Wednesday that the agents would be withdrawing.

“They have acted as an occupying force & brought violence,” she said in a tweet. However, Trump appeared to contradict that in a tweet of his own the next day.

However, federal agents were largely absent from the protests Thursday evening, which were more subdued.

At a time when Portland’s downtown, like other urban business districts, is suffering from a coronavirus-fueled recession, it would seem that the ongoing, violent disruptions might drag down the area’s real estate values. After all, many people have soured on the idea of cheek-by-jowl urban living during a pandemic, and now there are added clashes between protesters and law enforcement.

Can Portland’s housing market, particularly downtown, survive the combination of the coronavirus and civil unrest? The answer, of course, is complicated.

“For a lot of the condo and apartment [dwellers], this is extremely disruptive,” says Gerard Mildner, a real estate finance professor at Portland State University. “To be a resident of downtown is quite challenging, given the noise and the violence.”

However, “the entire city is not in flames,” says real estate agent Deb Counts-Tabor of Portlandia Properties. She’s been participating in the protests, which are mostly peaceful during the day and held in a predominantly commercial and office district with few residences. “The majority of the protests are happening in a four-block section of downtown Portland around the federal building.”

That may be why home prices, for now, remain on the rise. Median prices in the Portland metropolitan area, which includes nearby towns and suburbs, increased 5.3% annually, to $499,950, according to realtor.com® data.

Within the city limits, median prices also remained strong despite the turmoil, rising nearly 7% year over year, to $524,000 in the week ending July 25.  However, prices continued their yearslong fall in the downtown ZIP codes closest to where the protests are held.

“Our inventory is so low, and has been so low for long, and money is so cheap, neither the virus nor the uprising has had much of an impact on the market,” says Counts-Tabor. She was referring to record-low mortgage interest rates below 3%.

“South downtown, near the protests, the pandemic dropped our sales numbers from last year by about 20%, and the protests don’t seem to be adding to that,” she adds.

Prices for properties sold in south downtown fell nearly 3% for homes sales that were completed May through July of this year, compared with the same period last year, according to data Counts-Tabor pulled from the local multiple listing service. (List prices were up about 15% annually despite sold prices being lower.)

The number of sales in south downtown also fell from 34 from May through July 2019 to 26 over the same time frame this year. However, there were 11 pending sales, which are transactions that have yet to close.

“If there are people fleeing the center of the city, they’re being replaced,” says Counts-Tabor.

The protests contrast with Oregon’s history of racial discrimination

The outrage fueling the protests may be at least partly inflamed by Portland and Oregon’s long history of discrimination against minorities.

Portland is overwhelmingly white, with white residents making up more than 77% of its residents. Less than 6% of the population is Black, although that’s a higher concentration than the state overall, which has 2.2% Black residents, according to the U.S. Census.

The reason for that imbalance dates to 1844, when the territory of Oregon banned Black people from the region. Those who were there as slaves had to be freed within three years—and then leave the state. It was more because white workers didn’t want the labor competition than any abolitionist sentiment. This attitude was later enshrined in the state’s constitution, which stated, “No free negro or mulatto, not residing in this State at the time of the adoption of this constitution, shall ever come, reside, or be within this State, or hold any real estate, or make any contract, or maintain any suit therein.”

“A lot of people in the Portland area are aware of the history of racial exclusion,” says Katrine Barber, a history professor at Portland State University. “It’s very definitely fueling why people are out in the streets. There’s a kind of reckoning happening fueled by that history.”

After the Civil War, Black residents migrated to the Portland area.

“But they were never able to overcome that initial hostility that the pioneer period created,” says Darrell Millner, a professor emeritus of Black studies at Portland State University.

The Ku Klux Klan was very active in the state in the 1920s. Gov. Walter Pierce, who was elected in 1922 and went on to represent the state in Congress, was a member.

It wasn’t until World War II that Blacks moved to the city in earnest to take jobs in the burgeoning ship building industry. But once the war ended, many of the Black workers were let go to free up jobs for the returning white soldiers. White authorities and residents made it clear through redlining and deed restrictions that prohibited Blacks from buying homes in white neighborhoods, harassment, and general hostility that Blacks weren’t welcome. By 1950, more than three-quarters of the Black population had left the area, estimates Millner.

The state refused to ratify the 15th Amendment, which allowed Black men to vote, until 1959.

The Blacks who remained settled in the northeastern swath of the city where redlining was permitted. But due to rising prices and gentrification, many have since left.

“Very few communities of color still exist that aren’t gentrified in Portland,” says Kymberly Horner, executive director of the Portland Community Reinvestment Initiatives. The city-funded organization owns and operates about 700 affordable housing units and single-family houses. “In order for you to be here, the economics really don’t pan out for folks without really well-paying jobs.”

Will fewer folks want to live in downtown Portland?

If the federal agents do not return, Portland’s downtown protests could become less heated and the overhead helicopters could move on. That could help spur sales as buyers feel more comfortable moving in.

But even if the disruptions of the protests are ratcheted down, the urban core will still have to contend with the ongoing impact of the coronavirus, as the number of cases has been on the rise over the past few weeks.

As long as residents feel cooped up in their condos and apartments and surrounding businesses remain closed and boarded up, living downtown just isn’t as desirable. That’s a problem faced by cities across the country, as suburban areas offering single-family houses with additional square footage and private backyards have become more popular.

“COVID-19 would be the impetus for more changes than protests,” says real estate broker Blake Ellis, who works for Windermere Realty Trust in Portland. “None of the [downtown] listings I’ve taken have been fear-based.”

The market paused in March and April, but has since been coming back, he says. Demand never wavered for single-family homes, as folks sought more space and distance as the pandemic dragged on. The higher-end condo market suffered more, but has begun rebounding in the past few weeks, says Ellis, who lives in downtown Portland.

“It’s like a perfect storm,” says Horner. “We’re just not sure where the real estate industry is going to go.”