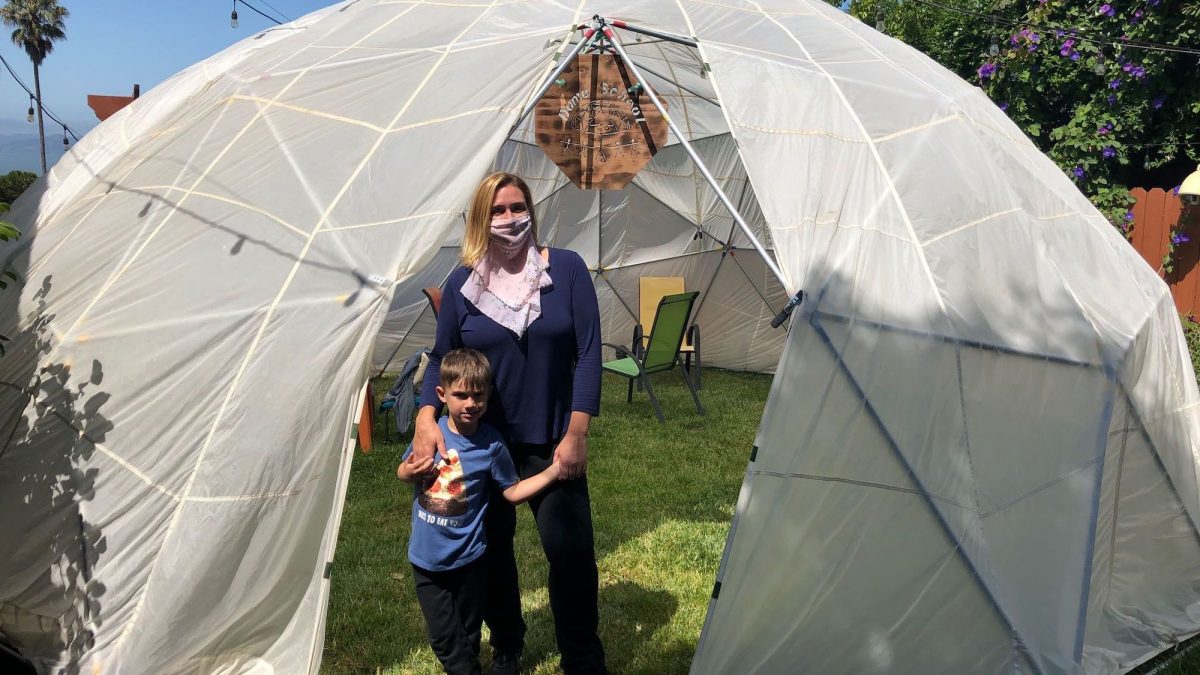 In the olden days, one-room schoolhouses were common across the country, many of them simple wood-frame buildings painted white.

Katy Young’s one-room school is going be a dome.

Ms. Young, who lives in the suburbs outside Berkeley, Calif., recently set up a 24-foot-round geodesic polyhedron in her backyard to host a small group of kindergarteners. An Airstream trailer parked nearby will serve as an administrative office.

The dome was built by Ms. Young’s husband, Randy, for use at Burning Man, the annual outdoor art festival in the Nevada desert. But with Burning Man canceled this summer, the structure is being repurposed for her kindergarten son and five classmates, whose Mandarin-language school has switched to distance learning in the fall.

With thousands of schools across the country moving to partial or full remote learning in the fall, parents are racing to form small at-home schooling groups or “pandemic pods,” groups of children who will be taught together. Some parents are hiring teachers to help guide the students through remote learning, while others plan to devise lesson plans on their own.

But finding a place to host the mini schools is proving to be a challenge. Even for parents that have the space, hosting students inside seems iffy because of social-distancing guidelines. Plus, many parents are working from home and don’t want the distraction.

For parents without the space or financial means for elaborate setups, the challenge can be even greater. Shauna Causey, founder and chief executive of Weekdays Micro-Schools, a website that helps organize schooling pods, says some families are retrofitting their dining rooms or basements, or taking over local parks.

Holding school outside comes with its own set of issues: What about Wi-Fi and bathroom access? Is there enough space for students to sit 6 feet apart? What happens when it rains?

Parents are devising workarounds. In Davis, Calif., Liam Honigsberg rolled out several Ikea benches and chairs, and erected a shade canopy at the end of a small side street for his 6-year-old son and his friends for the coming school year. Mr. Honigsberg said he suspects that setting up in the street is probably illegal.

If it gets too cold in the winter, the class might end up in down jackets in his open garage.

“The spirit of American innovation is sort of the centerpiece of where I was going with this,” said Mr. Honigsberg, who works in education technology.

Sage Cohen, the mother of a sixth-grader in Portland, Ore., thought her recently renovated garage would make the perfect location for a home school. Portland Public Schools is planning a fall schedule that is largely remote, and she didn’t want her son to toil alone.

Ms. Cohen’s space has several windows that can be opened during the summer months and closed during the wet ones.

Then she stumbled onto a problem: she didn’t have anywhere for children to go to the bathroom. She is considering bringing in a port-a-potty or installing a compost toilet. “I’ve never done anything like this before,” she said.

In Renton, Wash., Lynzora Lowmax cleared her basement of her families’ belongings and converted it into a home-school pod for her young children and a couple of neighbors. “They’re not used to being down there, so when we go down, they know it’s time to get on schedule,” she said. Ms. Lomax plans to teach the class herself.

In cities, where extra space and backyards are scarce, parents are looking at renting empty storefronts and churches.

New York City schools are planning to open in the fall with only partial in-person instruction for more than one million students.

Josh Skyer, who owns commercial real estate in Brooklyn, is hoping to interest one or more home-school pods in renting a vacant store and condominium space he owns in the Cobble Hill neighborhood.

“I would get Wi-Fi, throw a flat-screen on the wall and build it out to be a luxury school house for the kids,” said Mr. Skyer.

Michelle Luxmore, a real-estate agent in Seattle, is finishing an 800-square-foot cottage in her backyard that she had planned to rent through the home-sharing platform Airbnb Inc.

Instead, she plans to turn it into a school for her 6-year-old and his classmates, and wants to help other parents build similar structures in their yards. Seattle’s regulations recently changed to allow for such structures up to 1,000 square feet, but a permit is required.

Seattle Public Schools is planning to hold school remotely in the fall.

Ms. Young, who erected the dome, said she already is anticipating some of her neighbors complaining, as they did when she parked her Airstream in the yard. “We’re going to ask for forgiveness rather than permission,” she said.

Like many other parents, Ms. Young was stressed about what to do with her son after his school announced recently it would go fully remote.

Then Mr. Young remembered the collapsible dome he had spent about three months building for Burning Man, which typically takes place each August.

Made of old parachute material and aluminum piping, the dome will withstand light drizzle, but if it rains hard, the couple plans to throw some tarps on top or move the whole structure indoors. Inside of it, they plan to set up tables, workstations and portable heaters for the winter months.

It took the Youngs about three hours to set it up in the yard. Mr. Young carved a “Dome School” sign to hang out front.

“I am super happy to reuse it now,” he said.