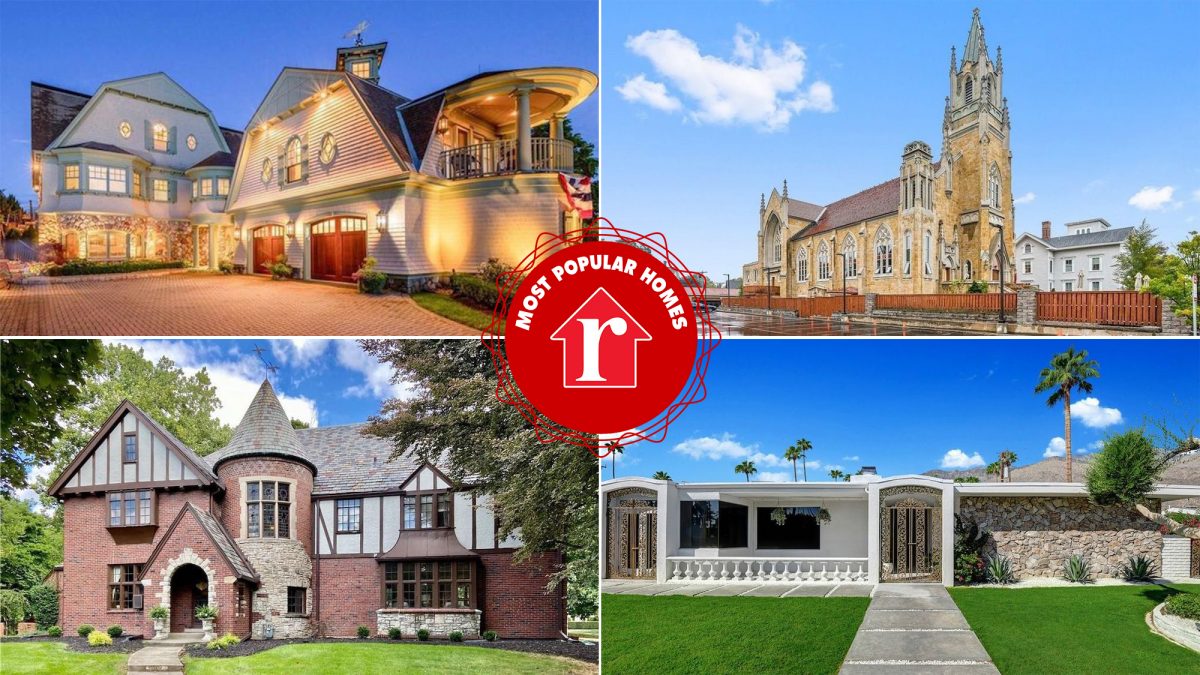 A Florida condo lined wall-to-wall with Budweiser cans crushed the competition this week. Guzzling down six times as many clicks as the runner-up, the aluminum-based work of outsider art is the week’s most popular home on realtor.com®.

Beer cans cover nearly every square foot of the condo—including the ceilings. And while a few empties strewn about do conspire to make a home messy, these strategically arranged cans create a masterwork.

You may not appreciate the artist’s chosen medium, but you must cheer one man’s devotion to a singular—if somewhat blurry—vision.

Sadly, the original owner of the place is now deceased, and the listing agent tells us that multiple offers on the $100,000 residence have come in.

The new owner now has an incentive to keep the cans right where they are.

Budweiser shared the listing photos on its Facebook page and has offered to keep the fridge stocked with beer—as long the condo buyer keeps the cans intact. How’s that for a deal sweetener?

Besides the suds-soaked condo, you also clicked on Derek Jeter‘s mansion on Tampa Bay, a pristine Palm Springs 1960s time capsule featured on Netflix, and a couple of historic mansions in the Midwest.

Fans of modern design must see an Illinois home built with a corrugated steel roof, which appears to float among the trees.

While we look for a coaster, we invite you to pop open your beverage of choice and scroll on down for a full look at this week’s most popular homes…

Why it’s here: Oceanfront in New Hampshire? Yep, a small southern slice of the Granite State faces out to the Atlantic Ocean. And this custom mansion takes full advantage of its oceanside location.

Highlights of the massive four-bedroom beach house include ocean views from almost every vantage point, a cherry-paneled library, and a cherrywood paneled elevator to shuttle folks to all three floors.

Outside, there’s a waterfront deck, lush landscaping, and access to a sandy beach.

Why it’s here: This industrial mod glass-and-steel home was built in 1982 by the architect David Hovey. Perched high on a ridge and backing up to the Walton Preserve, it’s designed for communing with surrounding nature, thanks to its walls of windows.

Outside, the home features lush gardens and an ipe wood deck with swim spa. Inside, highlights of the two-bedroom home include a custom kitchen, as well as a master bedroom suite supported by steel columns, which feels like a treehouse.

Why it’s here: Here’s an option ideal for a buyer who loves the idea of a savvy church conversion and doesn’t feel like putting in the work. The former Sacred Heart Church—built in 1933—was recently converted into 10 luxury condo units, and this unit gets an amen from us.

Luxe interior touches of the two-bedroom residence include 9-foot ceilings with crown molding and hardwood floors.

A private patio caps off this modern unit in one of Concord’s most distinctive buildings. Quite apart from the holy vibes, it’s close to arts, culture, and shopping.

Why it’s here: Family-friendly and waiting for a new owner, this four-bedroom home has it all. Namely space, a series of recent updates, and loads of potential.

The backyard has a new stamped-concrete patio, and the remodeled kitchen leads to a screened porch out back.

It’s the roomy front porch, though, that’s likely to attract a buyer, with visions of long, lazy afternoons.

Inside, the home features signature farmhouse touches, like shiplap ceilings, exposed beams, and a large fireplace.

A bonus for a skittish buyer: The home also boasts a safe room! Outside living is lovely, with a large entertaining area including a fireplace, kitchen, and an outdoor shower.

Why it’s here: Turnkey time-capsule alert! Built in 1969, this exquisite desert home is back on the market again, and has retained all of its period-appropriate fab furnishings and decor.

The home sits on a quarter acre in the Twin Palms neighborhood, and time has stood still in many of its rooms.

A few key updates to the kitchen and outdoor spaces were chronicled on the Netflix show “Stay Here.” For a buyer looking for a retro showpiece, this Palm Springs place has everything.

Why it’s here: A classic mansion for less than $400K. Make your way to Toledo! Stately and majestic, this 1928-built Tudor has been recently restored.

For fun, there’s a basement with a billiard-room.

Why it’s here: Prestigious and historic, this five-bedroom home sits on a lot of more than half an acre in Heritage Square.

It was built in 1916, and its grand features include a mahogany library, two dining areas, a second-floor master suite with a corner office, and a third-floor ballroom.

Outside, the parklike grounds boast a patio, Victorian garden, and water fountain.

Why it’s here: This All-Star waterfront mansion is being sold by the New York Yankees legend Derek Jeter. The estate has also recently hosted the NFL legend Tom Brady and his family, as they stylishly acclimate to the Tampa Bay area.

The massive custom mansion was built in 2011, on 345 feet of open bay. It’s the biggest waterfront property ever built on Davis Islands, and features a staggering 9,000 square feet of covered porches, as well as a dock with two boatlifts.

Why it’s here: For all you do, this Bud’s for you. In our understatement of the year: The now-deceased owner of this two-bedroom condo was a big fan of Budweiser beer.

He was such a steadfast devotee of the King of Beers that he lined the entirety of his home in Budweiser beer cans.

The only exception? The two bathrooms remain blissfully unadorned, which leaves the new owners at least a smidgen of space to put their own stamp on things.

Of course, the internet took notice of this project, and the listing was circulated far and wide on social media. If the new owner decides to keep the cans as is, Budweiser has committed to filling the fridge with beers for life.