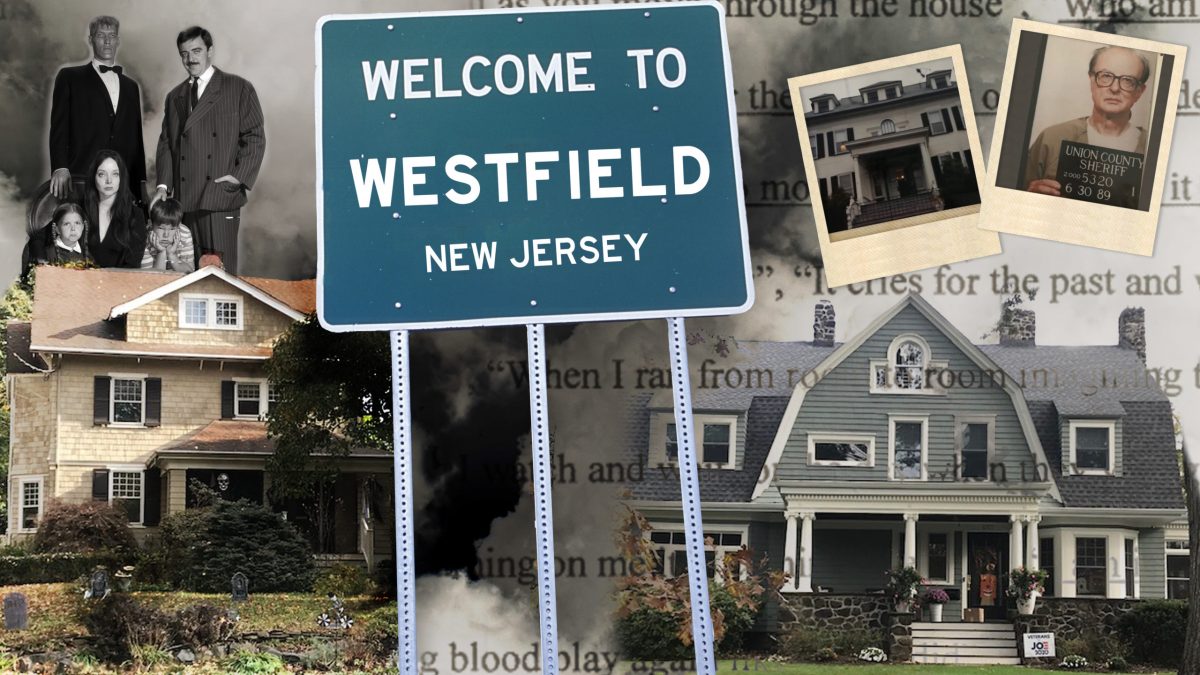 Westfield, NJ, a town of grand, restored Victorians and stately mansions perched on tree-lined streets, is the kind of place many folks aspire to one day call home. The downtown features mom and pop shops and bakeries alongside a Williams-Sonoma and Baby Gap stores. Even before COVID-19, busy roads were often closed off so residents could listen to live music while dining outdoors, participate in children’s arts and crafts projects, or take open-air yoga classes. Many who grow up in the affluent suburb, about an hour west of Manhattan, return after college to raise their families there.

The pandemic has boosted its upscale appeal, making it a popular destination for folks escaping nearby cities in search of more space. That’s led to a nearly 13.5% annual surge in home prices, to a median list price of $884,050 in September, according to realtor.com® data.

But most newcomers aren’t immediately aware that Westfield has a macabre side—and a deeply dark history.

A string of high-profile murders has taken place within Westfield’s 6.7 square miles, leaving homes across the city with gruesome footnotes in their property history. They include the sprawling home on a hill where accountant John List murdered his wife, three children, and mother, and then vanished for 18 years—perhaps the most famous “family annihilation” in U.S. history. Then there’s “The Watcher” house, whose new owners were subjected to a campaign of terror by a mysterious letter writer, inspiring a 2016 Lifetime movie and an upcoming Netflix flick.

It seems in nearly every generation, Westfield makes the national news for a sinister crime.

The town’s imposing, Victorian-rich architecture may have even inspired Charles Addams to create “The Addams Family” cartoons, with its spooky mansion and spookier inhabitants.

“It does seem like a lot for a town of 30,000,” says Lauren Barr, editor and publisher of the Westfield Leader, the local newspaper. She grew up here and graduated from Westfield High School in 1998.

But “I don’t think that it has affected the town’s reputation,” she adds.

The thing is, few would expect such heinous acts to occur in such a wealthy, picture-perfect community, says Arthur Lurigio, a criminology and psychology professor at Loyola University Chicago.

The crimes “stand out because of the place,” says Lurigio. “This isn’t supposed to happen. … It’s not a place where you expect violence to occur.”

The infamous ‘Watcher’ house wrenched Westfield back into the spotlight

Westfield’s most recent touch of national infamy was the twisted tale of “The Watcher” house.

A couple purchased the six-bedroom, turn-of-the-century Dutch Colonial for more than $1.35 million in 2014, then spent an additional $100,000 on renovations. But Derek and Maria Broaddus and their three children never moved in.

The family’s nightmare began when they received the first in a series of chilling letters. The anonymous writer claimed to be charged with “watching” the house, just as the writer’s father and grandfather did before. The “watcher” seemed to be particularly interested in the couple’s children, referred to in the letters both as the “young blood” and by their individual names.

“Will the young blood play in the basement? Or are they too afraid to go down there alone. I would [be] very afraid if I were them. It is far away from the rest of the house. If you were upstairs you would never hear them scream,” one of the letters said.

Perhaps most frightening, the writer appeared to be omnipresent and yet nowhere, perhaps hiding in plain sight.

“All of the windows and doors in 657 Boulevard allow me to watch you and track you as you move through the house,” the watcher wrote.

Then later in the same letter: “I pass by many times a day. 657 Boulevard is my job, my life, my obsession. And now you are too Braddus family.”

Another note asked: “Do you know what lies within the walls of 657 Boulevard?”

“It was quite the story at the time,” says newspaper editor Barr. “Everyone put their sleuthing hats on in town. … It was all anyone talked about for a while.”

The Broaddus family found themselves stuck with an expensive home they didn’t feel safe visiting, much less living in.

They sued the former owners of the home, who had received one letter from the watcher a few days before they moved out, but never told the new owners. The case was dismissed. Next, the couple proposed razing the place and selling the lot for two new homes to be built in its place. The idea was soundly rejected by the town’s planning board. The couple resorted to renting out the home.

Last year, the Broadduses finally sold the place for about $959,000, a substantial loss.

So who was the watcher? At various times, different neighbors came under suspicion. Some residents, unhappy with the unwelcome attention placed on their town, even surmised that the Broadduses sent the notes to themselves (which the couple staunchly deny). The mystery has never been solved.

One longtime Westfield resident walking her two dogs by the home on Tuesday morning said interest in the episode had died down.

“It was really intriguing at the time and very scary,” says Rebecca Jezierski, 70, who lives a few blocks away. But “all of a sudden [the letters] just stopped when these new people moved in.”

“The Watcher” house would be a creepy enough local legend for one town. But one day a half-century ago, Westfield accountant John List shot his mother, wife, and three children to death in their 19-room Colonial, known as Breeze Knoll.

List struggled to hold down a job, and hadn’t told his family he’d lost his latest one and was broke. Moreover, he felt his family was turning away from the church (he was a devout Lutheran) and toward temptation.

On Nov. 9, 1971, List shot each one, then wrote a letter to his pastor explaining he was saving them from the embarrassment of losing their home and from endangering their place in heaven.

He created a new identity, remarried, and moved to Colorado. It wasn’t until an “America’s Most Wanted” episode on the murders aired that he was finally caught—18 years after the murders. List died in prison in 2008 at the age of 82.

“People still remember it. When I was growing up, John List was the ghost story,” says Barr. She used to live two streets over from the List property.

During List’s 1990 trial, townspeople would line up outside of the courthouse as early as 6 a.m. to get a seat in the galley.

The home where the List family perished burned down nine months after the murders, in 1972. Locals traded theories about the suspicious fire. Some believed List returned to torch the mansion, says Barr. Others dismissed it as the handiwork of kids—or Satan worshippers. The property was auctioned off late that year to local newspaper publisher Kurt Bauer for a winning bid of $36,100.

The property itself then became the link to another high-profile killing in town, 25 years after the List murders.

Jeffrey Bauer, 48, Kurt Bauer’s brother, was shot by his estranged wife, Meta Bauer, in 1996 at the Westfield Leader, the local newspaper where he was the publisher. She then killed herself.

“It was just another very strange thing to happen in what’s usually a quiet, sleepy town,” says Barr, who did not work at the newspaper at the time.

The List murders weren’t the first case of a local parent killing a child in Westfield. In 1959, 17-year-old high school basketball star Raymond Bailey III was stabbed to death with a kitchen knife by his mother in their home. She then stabbed herself 25 times, but survived.

There were other murders in the tony town as well.

In 1974, Dr. John J. Graff, 56, was killed in a mugging after leaving the local train station. Authorities believed he was on his way home, just three blocks away. No one was ever caught.

Two years later, Lena Triano, 57, was hogtied with electrical cords cut out of her appliances, raped, strangled with a tie from her bedroom blinds, and stabbed multiple times in her Westfield home. It took 36 years for authorities to track down the murderer, Carlton Franklin.

More recently, college student Sohayla Massachi, 23, was abducted from Seton Hall University by her ex-boyfriend in 2000. He brought her to his Westfield apartment and shot her to death.

Maybe it’s fitting that Westfield’s most famous former resident was cartoonist Charles Addams, known for his dark characters and pitch-black sense of humor, as seen in “The Addams Family.”

His beloved characters grace the windows of the town’s downtown shops at this time of year, and the town’s AddamsFest puts on a series of family-friendly, Halloween events (this year with social distancing measures in place).

Addams was born in 1912 and grew up in a modest home with canvas awnings over the windows near the heart of town. On his walks to school, he passed by spooky, abandoned Victorians said to have inspired the “Addams Family” mansion.

“When Charles grew up, a lot of those houses were empty and rotting and falling apart,” says Kevin Miserocchi, executive director of the Tee and Charles Addams Foundation. (Marilyn “Tee” Addams was the cartoonist’s wife.) “That [Victorian] architecture intrigued him.”

The first “Addams Family” cartoon ran in the New Yorker in the late 1930s, after the cartoonist left Westfield for Manhattan.

“It’s a persistent myth,” says Davis, author of “Charles Addams: A Cartoonist’s Life.” She claims he borrowed architectural details from different buildings he saw and used them in new variations of the mansion. “The house is never drawn the same way twice.”

The pandemic has spurred buyers from nearby cities, like New York City, Hoboken, and Jersey City, to descend on Westfield. Many are searching for big homes with even bigger backyards to ride out the COVID-19 crisis and any new stay-at-home directives. Westfield’s more unsavory history doesn’t often come up in conversations with these soon-to-be residents.

“People coming to Westfield don’t know anything about ‘The Watcher’ house and don’t care about it,” says local real estate agent Scott Gleason, of Re/Max Select. “I haven’t heard about it in town conversations or real estate conversations in a year. … [And] John List is ancient lore.

“They’re not related to our real estate reality,” he says.

“If you have a spate of burglaries or there are armed robberies on the street in the central business district, you might see people wanting to move out,” says criminologist Lurigio.

But that is not the case here.

Westfield received an A-plus crime rating from AreaVibes, which evaluates the best places to live. It had 96% less violent crime and 71% less crime overall than the national average, according to the site.

The post Why the Upscale Suburb of Westfield, NJ, May Be the Scariest Place to Live in the U.S. appeared first on Real Estate News & Insights | realtor.com®.