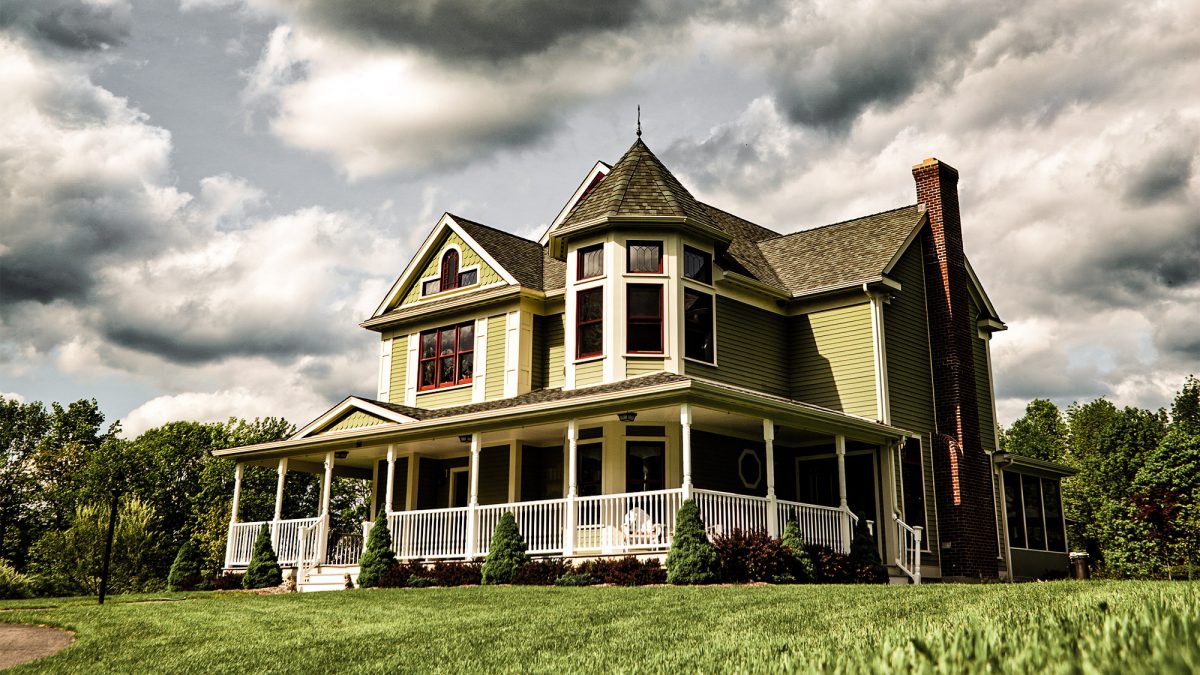 When it comes to horror flicks, there’s nothing Hollywood loves more than a towering Victorian manse that’s a bit past its prime. After all, there’s a reason Ryan Murphy set the inaugural (and scariest) “Murder House” season of “American Horror Story” in a sprawling (and spectacularly haunted) Victorian home. Alfred Hitchcock situated Norman Bates and his irascible mom in one for “Psycho.” Even Walt Disney understood the Victorian’s freaky allure—that’s why Disneyland’s Haunted Mansion is built in the same inescapable and inescapably unnerving style.

So why do Victorians make our flesh crawl quite the way they do? How did this highly ornate style—dubbed the “McMansion” of the antebellum period by one scholar—become so feared?

“It has a lot to do with the proportions,” says Jonathan Moore, an architect in Tampa, FL. “Many of the details—like doors, windows, and trim—are long and vertical.” Remind you of anything?

“There’s a direct relationship to an open mouth and wide eyes.” A screaming mouth, that is.

Terrifying visuals aside, there are a few nuanced reasons—firmly grounded in architectural history—why Victorians turned into the pop culture stuff of nightmares.

So let’s start at the beginning: The Victorian era is typically defined as beginning in 1837—when Queen Victoria of England ascended the throne. But the period’s influence on American architecture focuses on the years between 1860 and 1900.

Homes built during this period typically drew their influences from Gothic Revival, Romanesque, Queen Anne, and Second Empire styles. For example: false fronts, false chimneys, tall towers, dormer windows, and gables. Victorians were typically situated on hilltops, where their usually wealthy owners could, quite literally, look down on their neighbors.

“These are the house styles Hollywood depicts high on a hilltop with bright lightning strikes in the background, causing the descriptor building to be outlined in dark silhouette against the sudden light,” says archaeologist and architectural historian Ronald V. May of Legacy 106 Historic Preservation in California.

In other words: creepy.

The era was also notable for its overwrought furniture, dark interiors, and heavy draperies, says Charles Robertson, a board member of the Victorian Society of America (who himself lives in a meticulously maintained Victorian home in Washington, DC’s Dupont Circle neighborhood).

During their heyday, “these houses were indeed dark and cluttered,” he says. “They had bric-a-brac everywhere, and they were just elaborate and ornate.”

Interest in the genre waned dramatically over the years, leaving more and more Victorian homes empty and decrepit. Some historians claim the downfall of the Victorian aesthetic really began with the 1893 World’s Fair in Chicago—the site of which became known as “White City” for its clean, mostly white neoclassical buildings.

It was the beginning of the end for Victorian homes’ heyday, according to Robertson. The style fell out of favor in the 1930s as tastes began to skew toward modern design.

As time wore on, “the elderly owners passed away, and their children let the houses fall into serious disrepair with little or no paint, causing shingles to slough off, ornamental metal roof edges to rust and break down, pieces of siding drop off, and windows break and not be replaced,” May says.

But here’s the thing: What goes around indeed comes around. Look no further than San Francisco, which has enjoyed a historic home preservation blitz over the past several decades—and where a Painted Lady will now run you at least $3 million.

And if the headache of a large-scale renovation isn’t your bag, there are a handful of builders committed to building “new Victorian” homes—although the intricacies involved in this kind of construction make it more expensive than your usual run-of-the-mill new build.

But in the end, Americans love a good horror story—and classic Victorians provide the perfect backdrop.

“The aging population of historic homes makes everyone familiar with that one neighborhood house that has deteriorated, and everyone talks about the crazy old man that used to live there,” Moore says.

Throw in peeling wallpaper and paint, decades-old dusty draperies, and more gables and turrets than could possibly be prudent, and you’ve got the stuff of nightmares (and more than a few urban legends).

Watch: We Dare to Peek Inside the Winchester Mystery House

The post Designed for Dread: Why Are Victorian Houses So Spooky? appeared first on Real Estate News & Insights | realtor.com®.