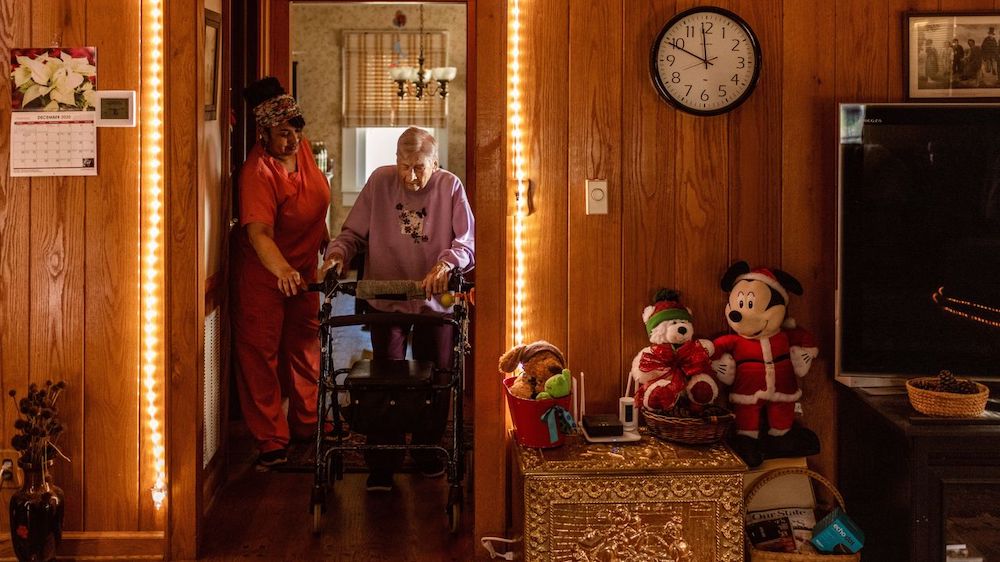 The pandemic is reshaping the way Americans care for their elderly, prompting family decisions to avoid nursing homes and keep loved ones in their own homes for rehabilitation and other care.

Americans have long relied on institutions to care for the frailest seniors. The U.S. has the largest number of nursing-home residents in the world. But families and some doctors have been reluctant to send patients to such facilities, fearing infection and isolation in places ravaged by Covid-19, which has caused more than 115,000 deaths linked to U.S. long-term-care institutions.

The drop-off has persisted since spring, including at times when the virus’s spread was subdued. In the summer, when many hospitals were performing near-normal levels of the kinds of procedures that often result in nursing-home stays, referrals to nursing homes remained down.

Occupancy in U.S. nursing homes is down by 15%, or more than 195,000 residents, since the end of 2019, driven both by deaths and by the fall in admissions, a Wall Street Journal analysis of federal data shows.

The decline in nursing-home patients covered by Medicare, which provides payments vital to the homes’ business model, is even steeper. That has left the industry in precarious financial shape. The biggest U.S. nursing-home company said in August it might not have enough money to pay its obligations.

Big insurers, home-health-care companies and some hospital systems are betting the new patterns of referral and care established amid the crisis will remain in place for the long term. They say doctors, hospital managers and families have seen how some older patients with significant care needs can be sent home. Just as the pandemic has spurred greater adoption of long-considered practices such as working from home, it has brought a re-evaluation of the role of nursing homes.

“We implemented a complete switch of mind-set to say home is the default” for patients leaving the hospital, even frail ones, said Peter Pronovost, chief clinical transformation officer at University Hospitals, an Ohio-based system.

“I don’t think we’re ever going to go back,” he said. “The drive to get every patient home who can be home is going to continue.”

Some nursing-home companies say they too are adjusting—bulking up their own home-focused offerings and aiming to upgrade buildings and staff to capture a new group of sicker patients who might come to them for hospital-level care.

Eventually, nursing-home operators say, demographics will buoy their industry, as more baby boomers require institutional care. Well before that, they say, vaccines should stem the tide of Covid-19 in their facilities.

Nursing-home use in the U.S. has been declining gradually for years. In 2019, occupancy was 80%, down from 84% a decade earlier, according to the Kaiser Family Foundation.

Surveys have long shown many patients don’t want to go to nursing homes. The pandemic has made them even less popular, according to a September survey of adults 40 and older by AARP. Just 7% said they would prefer a nursing home for family members needing long-term care, and 6% said they would choose one for themselves. Nearly three in 10 respondents said the pandemic had made them less likely to choose institutional care.

When Savanna Hollar, 90 years old and almost blind, broke her shoulder in August, her sons decided not to send her to the rehabilitation facility she went to after a broken hip three years before. They brought her home to recover in the farmhouse near Yadkinville, N.C., where she has lived since 1951.

The local nursing home had reported Covid-19 cases among residents, and it wasn’t allowing visitors. If sent there, Mrs. Hollar wouldn’t be able to see family members or get care from the aides who have long helped her at home. “She’d be lonely and scared and afraid to move,” said son Keith Hollar, 63.

The family hired a rotating cast of eight workers to watch her constantly, with two at a time on duty during the day. At home, Mrs. Hollar could enjoy her gray cat, Buddy, her favorite recliner and tomato sandwiches made with produce from her garden. She has since recovered.

For years, certain government policies have encouraged alternatives to nursing homes. Medicaid programs, which cover long-term care for poorer adults, have increasingly paid for long-term services that help patients remain at home such as health-care aides, though funding has long fallen short of demand.

In Medicare, which typically pays for a limited nursing-home stay after a hospital visit, more people have been getting their benefits through insurance companies, which have held down costly nursing-home stays. The companies now provide coverage to around 36% of Medicare beneficiaries, according to the Kaiser Family Foundation. Medicare has also begun paying health-care providers in ways that reward them for bringing down overall costs, giving the providers an incentive to reduce referrals to nursing homes.

The Trump administration gave Medicare insurers more flexibility to spend money on things that improve patients’ home setups. It made pandemic-related tweaks that allow Medicare coverage for more types of care in the home.

“We should be able to provide more services in the home setting that can enable somebody to be independent,” said Seema Verma, administrator of the Centers for Medicare and Medicaid Services. “Covid is going to force a national conversation about how we take care of our elderly, and clearly there are issues in nursing homes that go beyond infection control,” she said.

During his campaign, President-elect Joe Biden promised to spend $450 billion to make sure people who need long-term care can get support in the home and community.

“There’s no daylight between the Trump administration and the Biden administration on the desire to see more folks cared for in the home,” said Robert Kocher, an Obama White House health adviser now at venture-capital firm Venrock.

The number of Medicare-financed residents of nursing homes fell 28% in April and 34% in May from a year earlier, as the pandemic turbocharged efforts to steer Medicare patients away from nursing homes and as hospitals referred fewer after surgeries, according to an analysis of billing records done for the Journal by data firm CareSet Inc. The decline occurred even though, during the pandemic, the Trump administration waived a requirement that Medicare beneficiaries stay three days in a hospital before going to a nursing home.

In addition, some nursing homes shut off admissions in the spring, said Susan Craft, vice president of population health at Henry Ford Health System in Detroit.

“It was a forced period for us to work on home-care programs,” said Gloria Rey, the director of post-acute care at Henry Ford. “We’re continuing to work within our organization to make going home the priority.”

Major Medicare-plan providers Humana Inc. and UnitedHealth Group Inc. say they are working to develop programs that would allow sicker patients to be discharged from hospitals to their homes. The shift in nursing-home use “is probably one of the trends coming out of Covid, along with telemedicine, that is going to act as a real accelerant and be sustainable,” said Susan Diamond, who leads the home business of Humana, one of the biggest Medicare insurers and also a major home-health owner.

Nursing homes’ loss has been a gain for home-health companies, which provide services such as therapy and nursing visits, though typically not 24-hour care.

The falloff has been a disaster for the nursing-home industry, because Medicare pays better than the long-term stays Medicaid covers. Despite billions in pandemic-related government aid, some nursing homes have closed or been sold in recent months.

A November survey by the American Health Care Association, a nursing home industry group, found 65% of nursing homes were operating at a loss. Mark Parkinson, the association’s chief executive, said 10% to 20% might file for bankruptcy without additional government aid.

Genesis Healthcare Inc., the biggest U.S. nursing-home company, told investors in August it might not be able to continue as a going concern. Its loss in the third quarter deepened, and in November it said it would need ongoing government support to sustain its operations. Its shares have languished at less than $1.

On the other side, shares of Amedisys Inc., the largest publicly traded home-health-care company, are up nearly 75% in 2020. It saw strong volumes and higher profits in the third quarter.

“We want to take care of sicker and sicker patients, and show we can do it,” Amedisys CEO Paul Kusserow said.

Nursing-home officials said they worry that some frail patients could be left without enough supervision and support if sent home. A 2019 study published in JAMA Internal Medicine that compared Medicare hospital patients discharged to nursing homes with patients who got traditional home-health services found the latter were more likely to be readmitted to the hospital. Mortality and functionality of the groups were similar.

To help patients who are sent home, some hospital systems and home-health firms, including Amedisys, are building new, often tech-heavy programs that layer on extra services and aim to reproduce aspects of nursing-home-level care in patients’ homes.

Prisma Health, an 18-hospital system in South Carolina, in May launched Home Recovery Care, a joint venture with a company called Contessa Health Inc. that provides operational support and technology for the service. Some hospital patients who might qualify for a nursing-home stay are instead sent home using the new program, which some insurers pay for, Prisma Health officials said.

In early November, Joy Sprouse, 74, was taken to a Prisma Health hospital after having a bad reaction to an antibiotic she had taken. After a hospital stay, Mrs. Sprouse, who can’t walk because of spinal stenosis, was still weak and getting a different antibiotic through an IV. She didn’t want to go temporarily to a nursing home, as she did after two previous hospital visits.

Instead, she enrolled in the Home Recovery Care program and an ambulance took her to her rural Dacusville, S.C., house, where two nurses met her. Aides stayed there for five days, helping with cooking and other tasks. Nurses visited twice daily and used a tablet device to check her vitals. Physical therapists visited daily and she had digital visits with a hospital doctor.

Since the special program ended for her, Mrs. Sprouse, a former teacher’s aide, has continued to get some services she had before the hospital stay, such as visits by an aide for a few hours a day. She is back to doing her own cooking and favorite craft activities, such as making and decorating cards.

“I knew I would get better quicker at home,” she said of the small white house by a pond where she has lived for 26 years. She has been alone there since her husband passed away in January 2020, but her best friend lives across the street and she has regular visits from her children and grandchildren.

“I hope I can remain here the rest of my days. I don’t want to give up the way I live,”she said.

—Christopher Weaver contributed to this article.