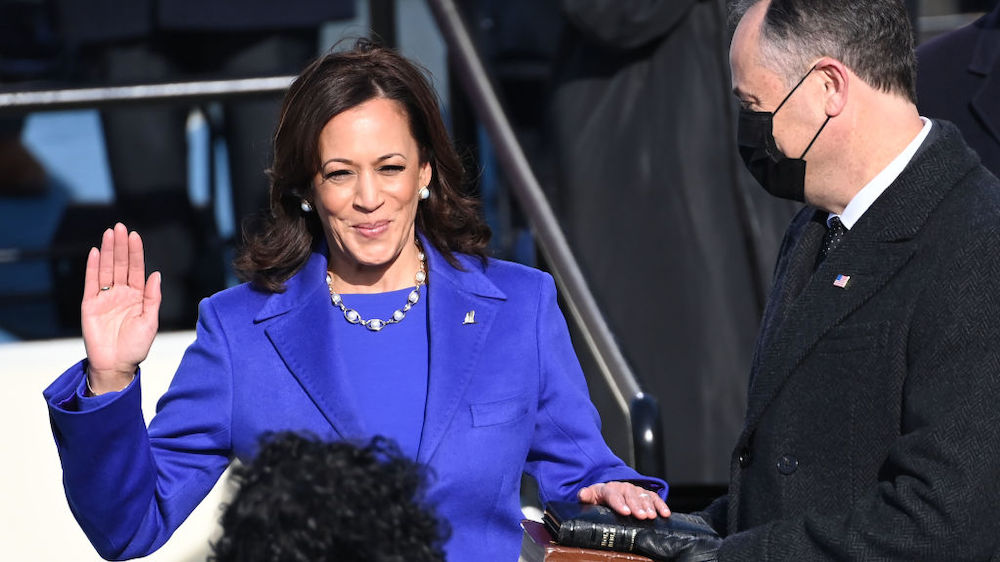 The second in command does have a special home to call her own—on the grounds of the U.S. Naval Observatory at 1 Observatory Circle. (It’s about 3 miles from the White House.) But this property is undergoing some repairs, so Harris and her husband, Douglas Emhoff, can’t move in just yet.

So in the meantime, the couple have dropped their bags at the Blair house—aka the president’s official guesthouse, at 1651 Pennsylvania Ave.

Here’s more on Harris’ current living arrangements, and why it may be even better than the official digs she’ll move into once repairs are done.

The Blair house was originally built in 1824 for Joseph Lovell, the first surgeon general of the United States. It got its name, though, from a later resident named Francis Preston Blair, an adviser to President Andrew Jackson, who acquired the property in 1836 and kept it in his family for the next century.

According to the U.S. General Services Administration, the brick and stucco home is a national landmark that was acquired by the federal government in 1942 and officially designated the president’s guesthouse in 1957.

Over the years, the Blair house was expanded to encompass three other townhouses (the Lee house and two Jackson Place buildings). Today, it sports 119 rooms laid over 70,000 square feet—making it even larger than the White House, which is only 55,000 square feet.

“The Blair house has literally been labeled ‘the world’s most exclusive hotel,’ and since World War II it has hosted heads of state, royalty, and now our new VP,” says Sara Burack, a real estate agent at Nest Seekers in New York City.

Inside the Blair house

The Blair house, which has 14 bedrooms and 35 baths, was redesigned in 1985 by two celebrated decorators, Mario Buatta and Mark Hampton. Buatta tackled the Lee portion, while Hampton took on the Blair side.

“The rooms and collections in this landmark building really tell our American story, especially via the refreshed elegant interior and opulent bedrooms and baths,” says Burack.

The look isn’t terribly modern, but a few updated necessities are available to the new vice president. As Burack points out, “New changes were woven into the old, such as charging stations near the 19th-century furniture.”

The home also features three formal dining rooms, more than a dozen guest suites, a gym and beauty salon, as well as three beautifully landscaped gardens, which were renovated in the 1980s.

The sitting rooms, drawing rooms, and studies are named for various presidents (Lincoln, Truman), while the library contains hundreds of tomes on history and culture as well as books that were gifted to the Blair house from global leaders.

“What an amazing treat for the first female VP and her lucky hubby to live in the midst of the amazing provenance of previous glam residents,” says Dolly Lenz, a real estate agent of the eponymous New York City firm. “Plus a staff of 18 to tend to your every need, and two kitchens—so you never miss a treat!”

One excellent reason the Blair house makes sense as a primary residence for Harris is its very convenient address: Living here puts her literally across the street from the White House, which makes meetings and other events easy to attend.

Even Biden took advantage of the Blair house’s proximity by staying here the night before his inauguration.

“Imagine being so close to the action—with no commute—in such a grand, beautiful, and historic residence,” says Lenz.

One of the top items on the repair list for the vice president’s official home, meanwhile, is replacing the chimney liners. The six-bedroom, 9,000-square-foot mansion is also likely to get fresh paint, rugs, and different artwork, similar to the Oval Office refresh for Biden’s tenure.

While it’s not clear how long it’ll take to spiff up the vice president’s residence, once it’s ready to go, Harris will become the ninth vice president to live here.

The post Inside Kamala Harris’ New Home—and Why It’s Not Where You Think appeared first on Real Estate News & Insights | realtor.com®.