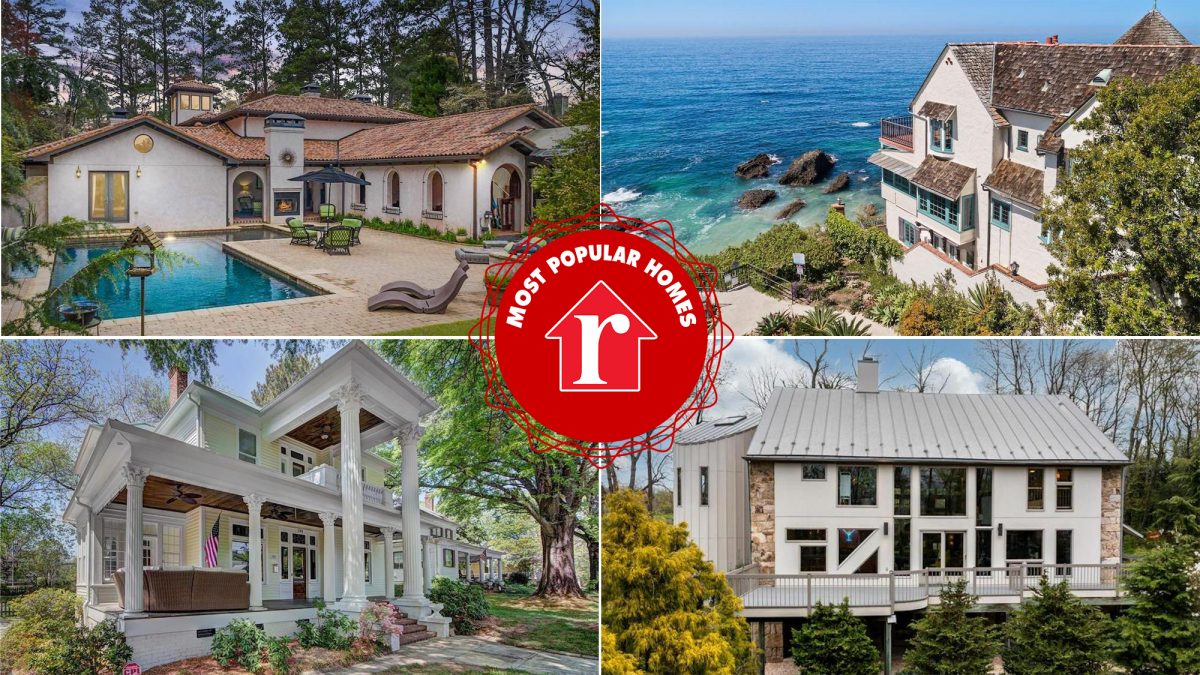 Take a dash of the O.C. and mix in a legendary actress—and clicks will surely follow.

Not all old-school stars stayed in Hollywood: Legendary actress Bette Davis once owned a lavish oceanfront mansion in Laguna Beach, CA. That home recently landed on the market, and real estate gawkers made it this week’s most popular home on Realtor.com®.

It’s easy to see why. Sitting next to sapphire blue water stretching as far as the eye can see, this beautiful beach house features exquisite craftsmanship, perfectly tailored spaces, and room to luxuriate in your surroundings.

Besides Davis’ former beach house, you also clicked on a Georgia home seen in the Netflix hit “Cobra Kai,” a different Georgia home that won HGTV’s “Rock the Block,” and an enormous 60-acre property with a midcentury modern home in the hills of the San Francisco Bay Area.

Another highlight is a bland Ohio home with a single listing photo and a fairly hilarious listing description. A local agent may have taken a cue from a recent Florida listing that went viral and let loose with a humorous stream of consciousness where you’d normally find a straightforward rundown of beds, baths, and backyard.

While we ponder the inspiration behind the oversharing agent in Ohio, we’ll ask you to simply scroll on down and enjoy this week’s 10 most popular properties.

Price: $350,000
Why it’s here: This Colonial dates to 1901 and is filled with handcrafted details such as the original flooring, corbels, columns, and a 100-year-old brass lock and skeleton key. The three-bedroom, 2,658-square-foot home sits on a large lot close to downtown. We think it might be worth the price simply for the dreamy front porch alone.

Price: $182,000
Why it’s here: Sitting on a bucolic acre and a half on Crooked Creek, this two-bedroom stone house is a bit rustic.

It features an open floor plan with a big family room, floor-to-celling windows, and handcarved woodwork. The private retreat includes a dock so you can take your rowboat or kayak out on the Allegheny River.

Price: $635,000
Why it’s here: This charming home scored the big win on Season 2 of HGTV’s “Rock the Block.” It sits alongside the other three homes featured on the popular show.

Professionally designed by HGTV stars, the camera-ready, six-bedroom home features a sleek kitchen with emerald green pops of color, a mudroom, built-ins, and a finished basement highlighted by a pink pingpong table.

Price: $950,000
Why it’s here: Spanning nearly 5.5 acres, this property features a 19th-century barn that’s been converted into a contemporary home.

Featuring work done by a local craftsman, the five-bedroom home is filled with natural light and features two-story ceilings, a fireplace, original stone barn walls, and a large bedroom in the barn’s former silo. The property comes with a one-bedroom carriage house, a three-stall stable, a chicken coop, and two fenced animal pens.

It was once a hotel frequented by actors and musicians passing through town. Eventually, the solid structure was turned into the town banker’s home. Today the extraordinary five-bedroom, 4,176-square-foot home still features its original hardwood floors, molding, and woodwork.

Price: $789,000
Why it’s here: Historic Allen Chapel was built in 1924 and served for generations as the sanctuary for a prominent African Methodist Episcopal church.

Now, thanks to a glorious conversion, it’s an elegant five-bedroom home. It comes with a two-bedroom apartment with kitchen, which could easily be used as a rental unit or in-law apartment.

Price: $4,098,888
Why it’s here: In the East Bay hills, this 60-acre property is surrounded by Wildcat Canyon Regional Park and offers spectacular views of the San Francisco Bay Area.

The main house is a midcentury modern with Asian influences built by a local doctor in 1963 and filled with quirky treasures collected over his life. They include knickknacks and objets d’art, which could be negotiated into the home’s sale price.

Price: $135,000
Why it’s here: The listing agent for this ho-hum three-bedroom home, Eric Cooper, seems to be workshopping a potential stand-up act in the listing details he provided.

He definitely doesn’t attempt to oversell the home’s lack of charm. In fact, the listing details are hilariously devoid of any flowery language about light or location. In a rambling paragraph accompanying the home, he stuck to the facts.

“This is a house, numerous people have lived in this house since 1979,” he wrote. He then overshared about his marriage, canines, and a lack of celebrity connections to the property. Read it for yourself, and let us know if you think Cooper has a future comedic career.

Price: $2,650,000
Why it’s here: Called Villa Flora, this mansion is also known by Netflix fans as the LaRusso mansion from “Cobra Kai.”

The Tuscan-inspired, six-bedroom home was built in 2008 by a couple who were inspired by their time on the Amalfi Coast. The result is a home that offers luxe indoor-outdoor living, gardens, and a terra-cotta roof. The stone shower in the master suite is a showstopper.

From the home’s perch above the sands in Orange County, the ocean views spread out forever. The French Normandy design is understated, so it doesn’t compete with the crashing waves and gorgeous natural beauty outside. The residence is ringed with balconies, decks, and patios for soaking in the ocean air and is also listed on the National Register of Historic Places.