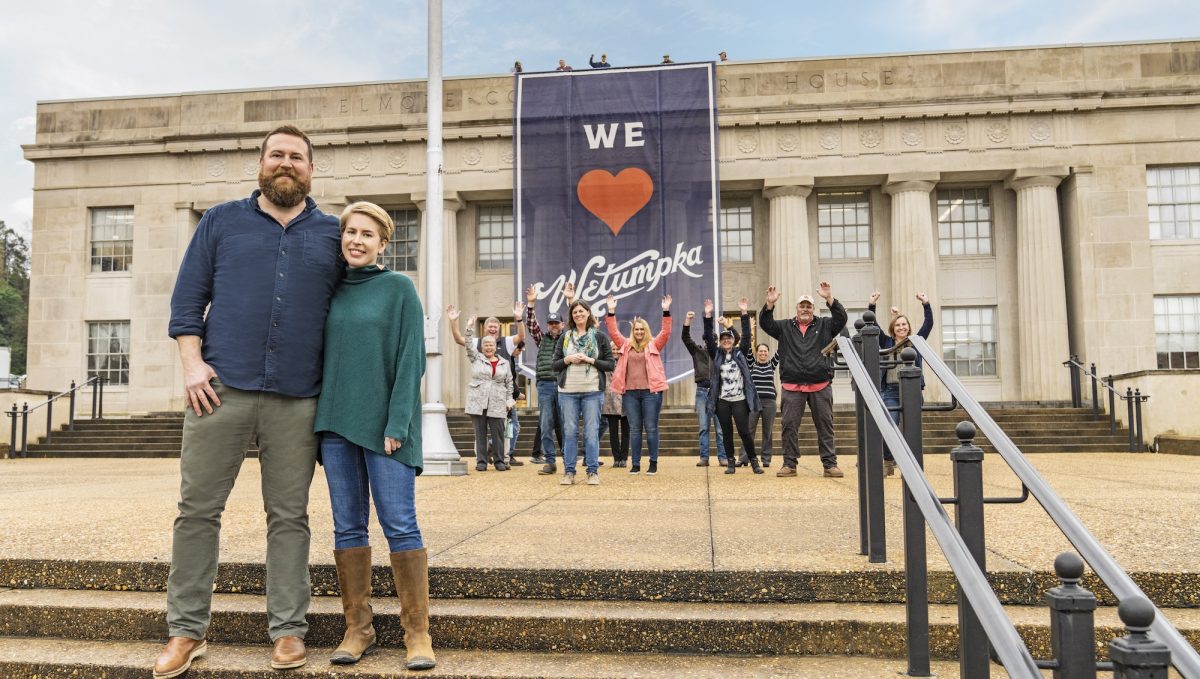 HGTV upended the way its legions of fans look at real estate. In its almost 30 years on the air, the cable network helped to make open floor plans all the rage, turned small-time home flippers into celebrities, and helped a couple of struggling towns transform into real estate powerhouses.

Now the network is attempting to re-create that magic in a condensed form with its latest spinoff, “Home Town Takeover.” The six-episode limited series, which premieres on Sunday, will follow two of its biggest stars, Ben and Erin Napier of “Home Town,” as they renovate the small town of Wetumpka, AL, with the help of celebrity guests, including singer Sheryl Crow, along with well-known HGTV personalities.

Having fallen on hard times, the town was eager for the help and publicity that come with a major HGTV production. Many of the roughly 8,400 people who call Wetumpka home hope the show will help the town by attracting new businesses and residents. But can renovating a dozen local buildings and public spaces, and producing basically a six-episode advertisement for Wetumpka, alter its fate?

It’s certainly possible. Waco, TX, saw its fortunes—and real estate market—soar over the years that Chip and Joanna Gaines renovated homes there on their HGTV show “Fixer Upper.” The success of that show helped replace Waco’s national image as the site of a deadly government standoff against a cult in 1993 with that of a charming small town that’s become a vibrant tourist destination.

“Anytime a small town gets some type of exposure through a program that’s known nationally, [it] creates a high level of energy and excitement,” says real estate and finance professor Reid Cummings, at the University of South Alabama in Mobile. “If a town can continue to promote itself to be a good place to live, raise a family, or retire, then it will do well over time.”

In other words, the national exposure the town is set to receive is likely worth more than the renovations. The Napiers have already followed in the Gaineses’ footsteps, boosting the national profile of their hometown of Laurel, MS, as they remodeled neglected homes there. Now, millions of their fans will be introduced to Wetumpka, which is less than a 30-minute drive from Montgomery, AL.

“It’s too bad that small towns are so often undervalued, because you can live a beautiful life in them,” Erin Napier said in a statement.

Until now, Wetumpka’s claim to fame was a crater created by a meteor at least 80 million years ago. However, like many smaller towns, Wetumpka fell on hard times in the mid-20th century as larger employers closed and newly built highways siphoned shoppers away from local businesses. The town intensified its revitalization efforts in recent years, incorporating art into its public spaces.  But a tornado that hit in January 2019 destroyed about 30 homes, several businesses, and  the historic First Presbyterian Church, which had become something of a local landmark.

The town’s fortunes changed last July, when it was plucked from about 2,600 towns that had applied to be featured on the new HGTV show. “Road to the Takeover,” a digital series taking a look behind the scenes of Wetumpka’s renovation, debuted on April 25. “Tales From the Takeover,” featuring the Napiers’ perspective on each episode, will be available on May 3.

“We wanted to take all of the things we’ve learned in 12 years of historic revitalization here [in Laurel] and teach another small town,” Erin told People magazine. “Every episode will have people in tears, because you see that when an entire community believes in a place, it can be changed.”

Change seems to be inevitable for Wetumpka, a town that seems ready for its 15 minutes of fame. Laurel Mayor Johnny Magee has seen firsthand what the power of an HGTV show can do for a small town. Since the Napiers’ show “Home Town” premiered in 2016, interest in both Laurel and its real estate prices have soared.

“Wetumpka, get ready for the ride,” Magee says.

Wetumpka is already benefiting from the HGTV buzz

Even though “Home Town Takeover” hasn’t aired yet, Wetumpka is already receiving an economic boost from the buzz around the show.

Visitors began descending almost immediately after HGTV announced in July that the town had been chosen for the series. Within three days of the news, the town ran out of its tourism brochures, says Shellie Whitfield, executive director of the Wetumpka Area Chamber of Commerce. Local business is also up 30% to 40% over last year—despite the COVID-19 pandemic, she says.

“The announcement has been like white gas on a fire,” says Whitfield. HGTV “took what we were doing and made it beyond what we could imagine. … Here’s people driving around, there’s people taking pictures of houses.”

When Whitfield moved to the town, about 3.5 years ago, nearly a third of the buildings in the business district were vacant and boarded up. No one wanted to go down there on a Friday or Saturday night.

Fast-forward to a recent Saturday evening, when she waited two hours to get into a restaurant downtown. When she got inside, the restaurant was filled with faces she didn’t recognize—in a town where everyone seems to know everyone else by name. She wasn’t surprised, though—she knew that some of the local hotels had been selling out of rooms. There are also fewer empty storefronts downtown these days.

Thanks to the publicity, Wetumpka received about double the number of new business inquiries that it did last year, says Lynn Weldon, the town’s economic development director. This included interest from boutiques, restaurants, pet stores, a book store, “businesses we never thought we’d get here.” Today, the downtown business vacancy rate is closer to 15%.

“The idea is to go throughout the community and change all these spaces so people want to be here again. And while they’re here, they can learn about the local history and appreciate the art,” says Jenny Stubbs, executive director of Main Street Wetumpka, which launched in 2016 to spur the town’s revitalization. The show “is helping us finally reach our potential.”

The spotlight on Wetumpka comes as many people are looking to leave big-city life during the pandemic.

“It put us on the map and has more people talking about Wetumpka and wanting to check it out,” says local real estate broker Beverly Wright, of Re/Max Cornerstone Realty. “You walk down the street, and you’re bound to see someone you know. It offers a lot of that small-town feel that a lot of people are hungry for these days.”

All the interest has boosted home prices, in a pattern seen across the country as buyers battle it out over a very limited supply of properties for sale.

Median home list prices in Wetumpka were up nearly 11.1% from July, when the show was announced, to March, according to Realtor.com® data. Nationally, they rose only 6% over the same period.

“It’s crazy,” says Wright, who’s now receiving multiple offers, sometimes 5% to 10% over asking price, on homes the day they go up for sale. “We’re in a market we’ve never seen before.”

Most of the real estate for sale in Wetumpka is three- to four-bedroom, single-family homes with at least two bathrooms on a third to a full acre of land. The homes range from 1,500 to 2,500 square feet, many with covered carports. The sweet spot for her buyers are homes on the outskirts of town priced between $250,000 and $300,000.

As a result of the newfound interest in the town, economic development director Weldon has also been fielding inquiries from builders interested in putting up new housing developments. One of these developers is interested in potentially building around 250 to 300 single-family homes in the $250,000 to $275,000 range within the city limits.

“We’re seeing a growth in everything from businesses to land development,” says Weldon. “It’s wonderful.”

The HGTV effect on the housing market in Laurel, MS

The Napiers’ hometown of Laurel is a case study in what happens when a TV show comes to town and becomes popular.

The show premiered in January 2016, and median home list prices soared 56.5% from March 2017 through March 2021, according to Realtor.com data. Nationally, they jumped 39% over the same time span.

“The impact has been tremendous. People are calling from all over the country, all over the world,” says longtime Laurel real estate agent Karen Rasberry, of Howard Johnson Properties. She’s also Erin Napier’s mother. “They’ve seen the town [on TV] and maybe want to buy a house.” “

Before “Home Town” aired, most of her clients were locals, plus a few who were relocating for work or family. Now the overwhelming majority are from out of state, many of whom are fans of her daughter’s show. There are even some investors who purchase homes to rent out on platforms like Airbnb.

“When the show began, there was an abundance of homes in the $50,000 to $80,000 range,” says Laurel’s Mayor Magee. Many of those residences needed work. “Those are mostly nonexistent now. Homes sales are better than they have been in a long time.”

The median list price in the town was $159,650 in March, according to the latest Realtor.com data. That’s a 45.1% increase in just one year. Nationally, list prices were up 16% over the same period.

The downside of being in the spotlight

While there may be no such thing as bad publicity, there are a few downsides to a town suddenly becoming well-known.

Locals may become priced out of their own real estate market, finding themselves competing against deep-pocketed out-of-state or even foreign buyers and investors.

Even those who already own their homes may see an increase in their property taxes, which often go up in tandem with home prices. That was a common complaint of Waco homeowners.

An increase in tourism can also lead to more traffic, less downtown parking, and longer waits at local restaurants. An influx of visitors and increase in investor-owned properties can also change the character of a place.

In addition, the HGTV effect will eventually fade—likely faster in this case, since the town won’t be featured in an ongoing series, says TV and popular culture professor Robert Thompson, at Syracuse University in Syracuse, NY.

He also points out that the show is airing on a cable network in the age of streaming when audiences are incredibly fragmented. While it will also run on the subscription streaming service Discovery+, that doesn’t have the reach of a major TV network 30 years ago.

“Just one show is not going to be seen by everyone,” says Thompson.

However, it could give Wetumpka the push it needs to get back on its feet.

“We wanted to say to the people of Wetumpka, ‘You have carried this burden a long time. We’re going to pick it up. We’re going to run a few miles with it and really get you ahead, and then we’re going to give it back to you,’” Ben Napier told People.