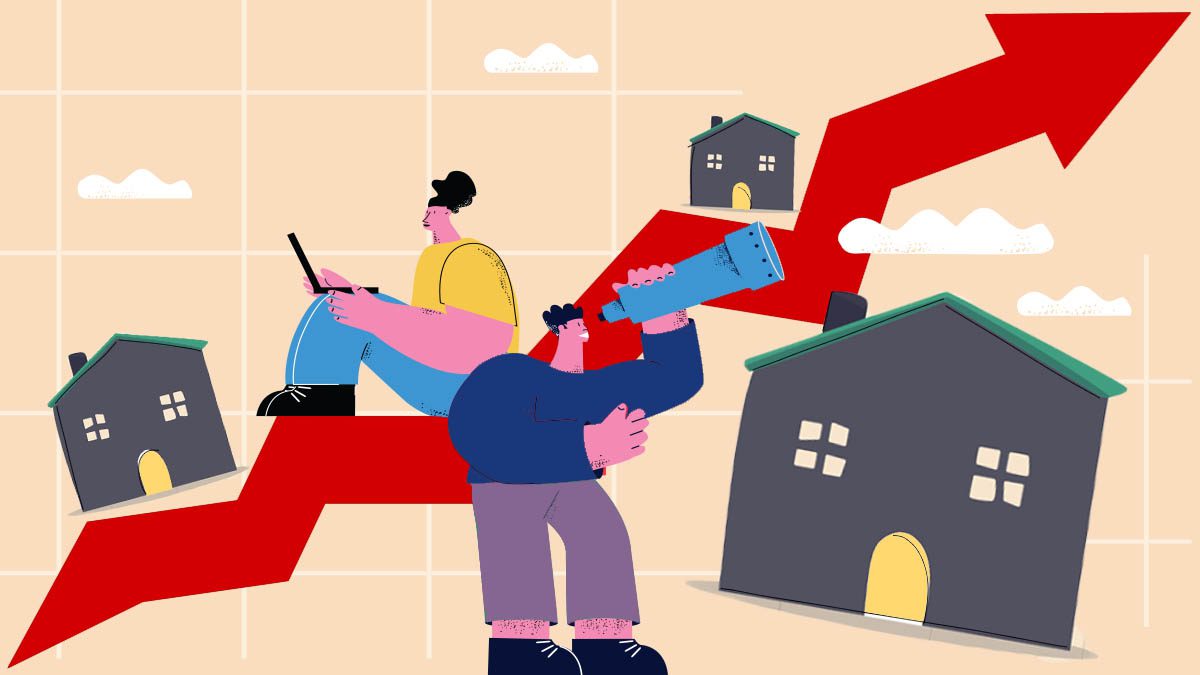 After more than a year of staggering increases in home prices, the party appears to be coming to an end.

The growth in prices, which rose more than 30% this year in some of the nation’s hottest real estate markets, appears to have peaked nationally. Home prices are still increasing, but substantially less than they were just a few months ago. There are even signs that some of the hottest real estate markets in the nation are slowing, with homes taking longer to sell and undergoing more price reductions.

And while this doesn’t mean the wishes of buyers will come true and real estate will suddenly become far more affordable, real estate experts do expect price increases in coming months to be much more manageable going forward in much—but not all—of the country.

“Prices and sellers reached for the moon this year. It looks like we are now about to move back to Earth,” says George Ratiu, director of economic research at Realtor.com®.

He anticipates more homes will go up for sale, helping to alleviate the severe housing shortage responsible for the unprecedented prices.

“For many buyers, particularly those who have been frustrated and wondered when will they get a break, this is the beginning of the market slowing down,” Ratiu says.

Even in two of the nation’s most competitive housing markets—Austin, TX, and Boise ID, both of which skyrocketed in popularity during the COVID-19 pandemic—there are signs a semblance of normality is returning. Sellers are now slashing prices in an increasing number of listings, and bidding wars are dying down.

However, real estate experts caution there are some hot markets that haven’t yet hit a zenith. So this real estate “correction,” such as it is, all depends on where in the U.S. you might be looking for a home.

“Earlier in the year, you could throw a dart at a map of the U.S. and wherever you landed, the housing market would be smoldering hot. Today, that’s not a guarantee,” says Ali Wolf, chief economist at national building consultancy Zonda.

The real estate market appears to be shifting

By the time the leaves turn in autumn, prices generally decline. This is the time of year that, in a normal market, smaller, less expensive homes go up for sale. The desperation of families on a tight school or relocation timeline that usually drives prices up even higher is largely absent. Plus, fewer folks are eager to buy or sell a home around the holidays.

“We’re falling more into a seasonal pattern, which may seem like a correction because we haven’t seen the market slow toward the end of the year like we normally do,” says Wolf.

But even with seasonal declines, Wolf is noticing primary changes to the market.

“We’re past the point of anything goes in the housing market,” she says. “We’re not going to see the same level of home price growth. You won’t have to remove all the contingencies just to win a home.”

Seasonality appears to be just one component of the shift.

Nationally, median home list prices have held steady over the past four months, hovering around $380,000 after peaking at $385,000 in June, according to the most recent Realtor.com data. The number of homes with price cuts has more than doubled from a low in February. Plus homes are taking longer to sell.

The number of days on the market before a home sells, a sign of how hot a market is, has also steadily been rising since June, increasing from a low of 37 days to 45 in October.

Rising mortgage interest rates are also likely helping to keep price growth in check as homebuyers have only so much money they can spend on housing each month. Rates fluctuate, but they’ve been trending upward from the historic 2.65% for 30-year fixed-rate loans last January.

Even a half-percentage point could increase monthly housing payments by about $80—or $960 a year—on a median-priced home of $380,000. (This assumes buyers put down 20% and doesn’t include property taxes or insurance costs.)

Homes that are priced too high will likely attract less interest as buyers are now grappling with higher homeownership costs. That means fewer bidding wars and offers over the asking price, which can greatly increase prices as well.

“The pool of buyers who can continue to push prices higher from here is a lot smaller than it was last year,” says Wolf.

Where will home prices keep zooming up?

Not every real estate market will fare the same. The most desirable ones that have the least amount of housing available will continue to see prices spike. However, price growth is slowing, and some experts even predict could dip, in places that have lost lots of jobs and residents in recent years, and since the pandemic.

“We’re going to see markets and prices move differently across the geographies,” says Ratiu. “Local economies can make all the difference in how local real estate performs.”

For example, prices in many Rust Belt and other struggling Midwestern cities aren’t expected to continue ratcheting up at unheard-of levels. Locals won’t be able to keep up as salaries may not be high enough to support the prices. Less competition typically leads prices to fall.

“Some of the markets got a little too hot and prices were rising faster than incomes, so some slowdown in price growth was expected,” says Robert Dietz, chief economist for the National Association of Home Builders. “In some individual markets, you could have slight declines.”

But that’s likely to be coming to an end.

“Most of the people who wanted to move already moved,” says Ratiu.

However, prices could continue shooting up in Southern and other cities that have experienced strong job growth. New residents are more likely to continue moving to places with strong economies and lucrative work opportunities.

“There are a few markets that have not peaked out yet,” says Norm Miller, a real estate finance professor at the University of San Diego. He cited places like Phoenix and Charlotte, NC, both of which have strong economies and growing populations. However, by now “most have flattened out.”

The tide has been turning in blistering metros like Austin and Boise. As offices shuttered in the early days of the pandemic and remote work took hold, these places became attractive, more affordable alternatives to high-priced cities. Buyers were able to purchase larger homes for much less than what they would have spent in their former communities.

In Austin, prices skyrocketed nearly 54% over the past two years in the metro area when comparing median list prices from pre-pandemic October 2019 to October 2021 using Realtor.com data. The median list price hit $549,900 in October. That’s a new all-time high after months of record-shattering prices.

However, some measures show that price growth reached its apex around August. Prices on the same homes were still 36% higher in September than the same time a year earlier, but were down from 40% in August, according to the Texas Real Estate Research Center at Texas A&M University in College Station. The center has an index that looks at prices of the same properties over time.

“Price growth will continue to drop,”  says Louis Torres, a research economist at the center.

In Boise, list prices reached similarly new heights. They shot up 47% from October 2019 to hit $530,000 in October 2021, according to Realtor.com data. They’ve since dipped a bit, falling just under 2% from July to October.

However, all signs point to the market beginning to normalize. Over the past two months, the number of homes for sale has risen more than 150%, says Robert Inman, director of operations at Boise’s Best Real Estate, a Keller Williams affiliate. Buyers are no longer going so high over the asking price, and price reductions are picking up.

That’s largely due to an influx of new construction hitting the market, says Inman. That meant there were fewer buyers competing for the same properties, taking some of the steam out of the bidding wars.

“We had a bunch of sellers being told they could get whatever they wanted, and they did,” says Inman. However, “we can’t see 20% appreciation year over year forever. And now we’ve gotten to a point where most people can’t afford homes.”

Why prices aren’t expected to return to pre-pandemic levels

Unfortunately for cash-strapped buyers (and fortunately for homeowners), home prices aren’t expected to return to pre-pandemic levels. The reason is that there simply aren’t enough homes to go around. That’s the reverse of what happened leading up to the housing bubble popping in the 2000s.

Back then, there were more homes for sale than buyers. It was also easier for just about anyone to get a mortgage. These days, the opposite is true. The nation is suffering from a severe housing shortage at a time when more Americans are hitting prime homebuying years.

Builders grappling with a lack labor and materials and supply chain backups have been unable to ramp up. That lack of supply, coupled with high demand, should ensure prices don’t plummet.

The exception could be if something unexpected were to hit the economy, or if mortgage rates jumped substantially.

“Unless mortgage rates would hit 4.5% or higher in the next year, it’s unlikely we’ll get a significant correction in prices,” says real estate finance professor Miller.

The phenomenon of working from anywhere with a strong Wi-Fi connection is also likely to keep prices high, says Ed Pinto, director of the Housing Center at the American Enterprise Institute, a right-leaning think tank.

Remote workers, or those who go into their offices only a day or two a week, who can’t afford the prices will either remain renters or move farther out of cities to cheaper areas.

“As soon as somebody drops out because they can’t afford the house due to rapid appreciation, there’s somebody in line who’s ready and willing and able to buy the house at a higher price,” Pinto says.

The post Has the Housing Market Peaked? That May Depend on Where You Live appeared first on Real Estate News & Insights | realtor.com®.