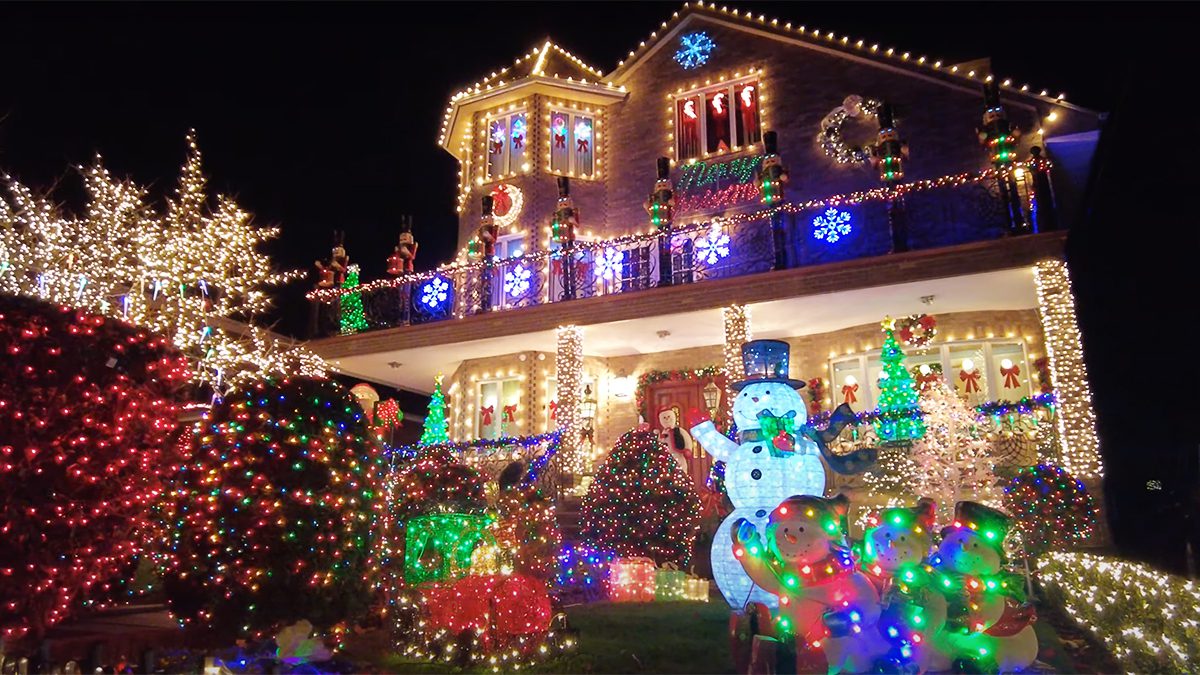 Every year, homeowners around the country engage in a festive game of one-upmanship to see who can create the wildest holiday light show. And these amazing, audacious, and sometimes mind-melting displays are easier than ever to enjoy.

In the good old days, you had to drive to some far-flung neighborhood and follow a line of cars to see a true Santa-inspired spectacle. In 2021, you simply have to fire up YouTube to check out homes decked out with strings of flashing lights, pop music, and large amounts of seasonal cheer.

This year, homeowners with an abundance of holiday spirit have outdone themselves. We love a good light show, and these seven homes, lit up for the season, could outshine the sun.

So grab a glass of eggnog (if you can find one), and let these seven holiday displays dazzle you.

The Bostick Family Light Show in Garden City, MI, debuted last year. Luckily for us, the tradition continues this year.

You don’t have to live in Michigan to lay eyes on it. The whole show—staged to a medley of Queen hits—was filmed to demonstrate the family’s audiovisual prowess.

If you’re inspired to consider a move into the neighborhood, you’re in luck.

With 46 homes available in the Detroit suburb and a reasonable median home price of $164,500, you could consider this three-bedroom charmer on the market for $149,900.

Over in the San Antonio area, Brenda and John Wilson, better known (to some, anyway) as Santa and Mrs. Claus, have decked their dwelling with bundles of candy cane-striped trees. They clinched the prize for best holiday light show in Texas on an episode of ABC’s “Great Christmas Light Fight.”

Their display is certainly a feast for the eyes—and the nose. A train gives off a whiff of peppermint-scented smoke, and Santa’s sleigh sits in the middle of the candy-filled extravaganza.

Apparently, the city of Windcrest takes its holiday lights seriously, and each year, thousands flock by to get an eyeful.

If you’re struck by the spirit of decor, you may want to check out the homes for sale in the area—with 21 currently on the market, at a median list price of $305,000.

A huge house in Illinois is decked out with over a million bright lights, 2,400 strobes, and six lasers, and drone footage is really needed if you want to take in the entire spectacle.

According to a community website, the show, in Elburn, IL, has been hosted by the Larsen family for the past 14 years.

Manhattan is famous for its holiday-themed windows, but the Saks Fifth Avenue department store takes things a bit further, with a multimedia light show. It’s a dazzling winter wonderland of music and moving lights.

Crowds flood over to the address on Fifth Avenue to see the light show that covers the building’s entire facade.

It isn’t cheap to live nearby, but the Upper East Side offers plenty of options, with condos going for a median price of $1.5 million.

Away from the tourist-friendly displays of Manhattan, a light show for locals grows each year in the Brooklyn neighborhood of Dyker Heights.

This community display offers everything from inflatable Santas to an array of colorful lights.

The amazing exhibit encompasses several streets and can be enjoyed on foot throughout the holiday season.

If you’d like to live in a neighborhood that truly turns on the Christmas joy, there are plenty of options, but you’ll need some serious dough. There are over 150 places on the market, and the median home price is a hefty $1,388,000.

If you’ve been to Walt Disney World, you may have noticed the giant, geodesic dome that has been a fixture at the park since it opened in 1982.

During the holidays, the orb really goes all out, with a festive light-and-sound show.

While you can’t actually live at Epcot, you can live close by, at a Disney-approved neighborhood like Celebration, FL. The area is a magnet for Disney fans and has 80 home listings, with a median home price of $549,900.

If you need a dose of Tay Tay in Texas, a trippy light show set to the pop star’s hits is one for the ages.

Located in the Houston suburb of Cypress, TX, this home is a standout in an area where family-friendly homes are plentiful. There are about 800 homes for sale in the town, and the median list price is about $395,000.

As for the display, a tree belts out Swift’s hits, as lights capture the look of softly falling snow, toy soldiers, and holiday gifts. Moving multicolored lights highlight the home and sync to the songs.

A video screen in the window even shows shots from Swift’s videos. We simply can’t “shake it off.”