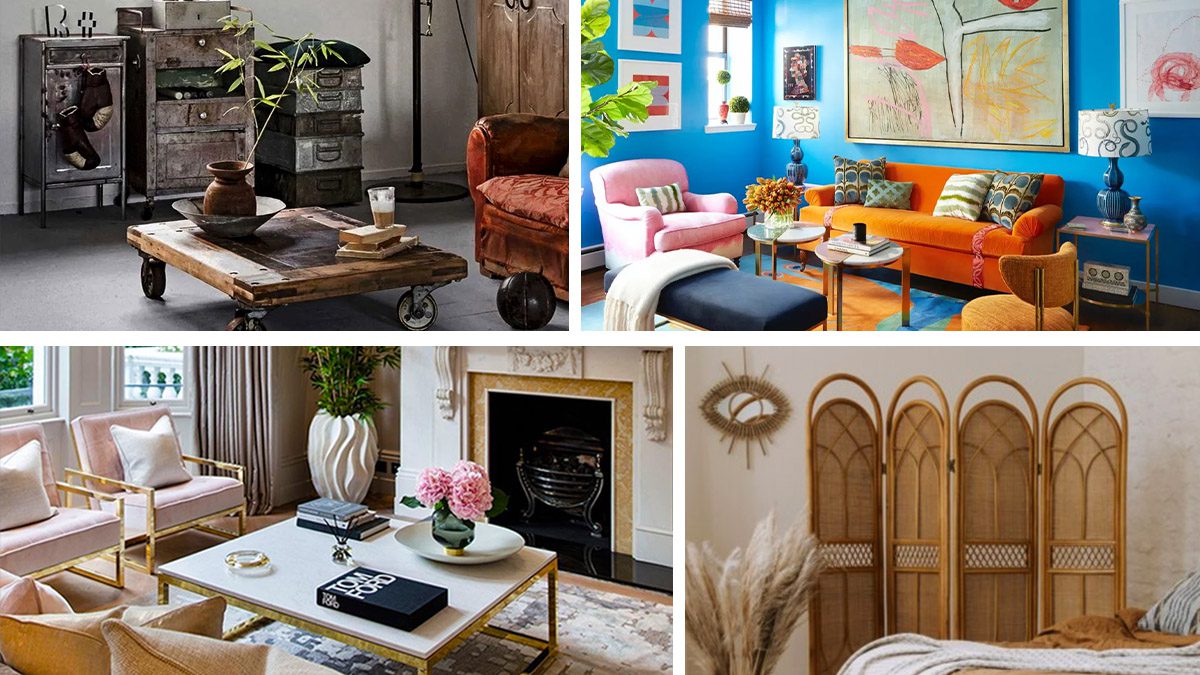 While some of us may only just now be getting around to taking down our holiday decor (seriously, get rid of the tree already!), the start of the year is traditionally one of the prime times to get rid of the old and usher in the new. And right now, the process can be even more impactful: a much-needed catharsis after a rough, pandemic-dominated few years.

So as we get closer to the start of peak home-selling season, homeowners considering listing their homes this spring may want to consider giving their decor a face-lift. But which decor style should they embrace? Much like national and local health advisories, recent design trends are all over the place. Is minimalism still a thing? Is Hollywood glam still glamorous? Are the death notices for modern farmhouse greatly exaggerated?

What’s in and what’s out this season can be overwhelming for those who aren’t professional interior designers. That’s why Realtor.com® dug deep into Google search trends data to figure out which interior styles will likely dominate 2022—and which ones are starting to look as dated as the outdoor Christmas lights practically begging to be taken down. (Come on, it’s nearly February!)

We found that these days, the hottest styles are all about comfort.

That makes sense given how much time folks are spending in their homes these days due to the ongoing COVID-19 pandemic and rise in remote work. Another trend is more, well, more, as people are looking to immerse themselves in uplifting decor that makes them happy just being in their spaces.

It’s a stark departure from the minimalist and sleek styles showcased on TV design shows the past few years, says Cortney McClure, a Bartlesville, OK–based designer.

“What started as simple and clean has started to feel sterile and cold, which are two of the last things people want right now,” says McClure.

To get a better sense of what’s changing and why, we analyzed Google Trends, which looks at search interest in a topic or term, over the past five years. A value of 100 represents the term’s peak popularity, while 50 means it is half as popular. A score of 0 means there was not enough data for this term, or more plainly, not enough people were searching for it.

So what’s hot and what is most definitely not as we head into 2022? We crunched the data and got details from top global designers to find out.

As British textile designer William Morris once said: “Have nothing in your houses that you do not know to be useful, or believe to be beautiful.”

The bohemian (aka boho) style seems to accomplish just that, with an eclectic mix of practical, homemade items and fun-loving, artsy decor. We’re talking woven wall hangings, rattan furniture, natural-looking woven rugs, and all those other homey touches that make boho such a welcome addition.

In other words, it’s no surprise to designers that interest in this beloved trend has more than quadrupled since 2017. And it’s still trending way up. Expect it to be a fixture for the foreseeable future.

“This style is all about personal expression, comfort, and ease of living,” says L.A.-based interior designer Mark Cutler, of Cutlerschulze.

“Cottagecore,” an even cozier interior trend, is also heading straight up in popularity, with no signs of slowing in sight. The trend, which started as a Gen Z/millennial social media trope and exploded into a full-blown movement during the pandemic, is all about embracing simple comforts, often through a nostalgic lens.

It hit high gear as city dwellers fled to the burbs and beyond in search of a simpler, country life. It got another bounce from perennial trendsetter Taylor Swift, whose smash album “Folklore” evoked the trend.

While slightly similar, this trend is replacing the popular modern farmhouse trend, which may be on its way out (see more below), according to designers.

“More than shiplap and wooden dining benches, what people really want right now is this connection to a true family home. The kind of place where your kids’ heights are written in the doorway,” says McClure.

Not all trending designs are looking back toward antiquity. In fact, modern industrial styles and interiors are still very much in vogue, with interest up 12%.

The industrial design style may bring to mind cold concrete and metal, but it also consists of natural looks of brick, wood, and other earth elements, says New York–based designer Doreen Amico-Sorell, of Sorell Interiors.

With beloved stripped-back details, industrial design is very much a back-to-basics approach to interiors that includes details like unfinished furniture, exposed beams, and metallic accents in silver and bronze.

“It’s about embracing what was once old and is now new again,” says Amico-Sorell.

Keeping in line with the trend toward simpler living, decadence and glamour are on their way out of style. After nearly two years of living in sweats and slippers, folks are apparently seeking out simpler styles in their homes as well.

Inspired by the golden age of Hollywood, this design trend is all about bold colors and textures, especially those beloved by old Hollywood, like animal prints and other dramatic patterns. But Hollywood glamour seems to have lost a lot of its sheen—with interest dropping by nearly a third over the past five years.

Now, designers say, it’s being replaced with similar materials but with a slightly less polished look. For example, mirrors are still hugely popular, but now they tend to be antiqued, while crystal elements like chandeliers are more tumbled, less perfect, and more natural.

“The world is becoming more aware of what’s truly important,” says Amico-Sorell. “Things such as family, sustainability, and wanting to give back and pay it forward fly in the face of selfish opulence. In short, the current generation is no longer quite as interested in the superficial.”

While over-the-top luxe might be out, so is any sense of deprivation—aka minimalism. Spare designs with just the absolute bare necessities are starting to become extinct. What’s taking its place is maximalism, which embraces the concept of “more is more.”

While interest in a pared-down, minimalist look had steadily been gaining steam since at least 2017, it started to slip last year. Meanwhile, maximalism, which was barely on people’s radars until 2021 (as evidenced by the lack of search interest, bottom trend line), saw a huge spike since the pandemic.

Unlike Hollywood glamour, maximalism is more about surrounding yourself with things you love, rather than showing off. This means combining decor pieces that mean something to you, no matter how crazy, mismatched, or over the top they may seem. (This could take the form of a crowded gallery wall or mounds of bright throw pillows.)

“People are in their homes so much now, they want to surround themselves with a curated mix of things that make them feel good, in a variety of colors, patterns, and textures,” says L.A. designer Allison Knizek.

If you’ve started to feel like the term ‘modern farmhouse’ is a bit overplayed, you’d be right. The beloved trend made famous by Joanna Gaines in the HGTV phenom “Fixer Upper” seems to have finally reached its peak.

After a quick rise over the past few years, the modern farmhouse trend, which combines a cozy, traditional country style with clean and modern touches, is finally being put out to pasture. You know the looks we’re talking about: barn doors, shiplap walls, rustic cupboards, and natural linens galore.

“Like all trends in interior design, there’s an attached life span,” says Amico-Sorell. “And this one just happens to be coming to an end, being replaced by a greater nod to the classics.”

The post Is Modern Farmhouse Dead? Is Boho Big? Here Are the Design Styles Soaring in 2022—and the Ones Crashing appeared first on Real Estate News & Insights | realtor.com®.