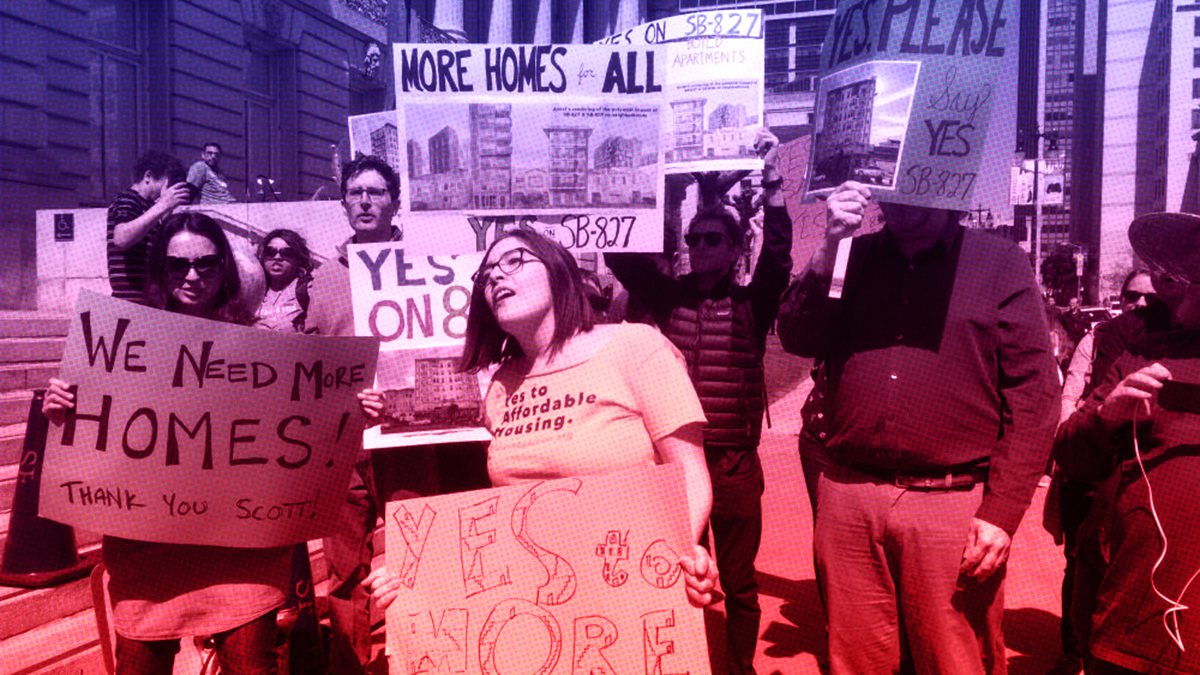 You’ve probably heard of the NIMBY movement, which stands for “Not In My Back Yard” and describes an organized group of residents who oppose new construction in their neighborhood.

But are you familiar with the phenomenon’s younger, perhaps more progressive cousin, YIMBY, or “Yes In My Back Yard.” This community advocacy movement heartily supports new developments, especially ones that promote affordability or diversity.

Here’s a closer look at YIMBY and what to expect if there are supporters living near you.

A brief history of YIMBY

YIMBY is a relatively new term, coined in the 2010s. It rose from a movement in the San Francisco Bay Area among younger millennials and aspiring first-time homebuyers. Unable to afford the local housing market, they believed NIMBY baby boomers were to blame. It wasn’t just that these older homeowners had snapped up properties long ago. They had also, some believed, successfully stalled new developments that could have fed the area’s hunger for well-priced housing.

“Essentially, it was all these young people saying, ‘We can’t afford to live here’ and ‘We understand that you oppose [development], but we want housing options,’” explains David Reiss, professor of law and research director at the Center for Urban Business Entrepreneurship in New York City.

California YIMBY is a major force in the movement. It’s a housing advocacy organization with 80,000 members and 20 volunteer teams across the state. According to the group’s website, members are reacting to a “lose-lose situation,” where “cities enforce a severe shortage of affordable homes through laws that restrict home building.” This in turn, they say, “forces Californians to compete with each other for sparse, and increasingly expensive, housing.”

Similar groups such as Seattle for Everyone and the New York YIMBY blog tend to pop up in large urban areas around the country where the younger generation feels shut out of housing that won’t bankrupt them.

Unfortunately for YIMBYs, “NIMBY homeowners tend to have the upper hand,” Reiss notes. “They have more resources, and they are the local establishment.”

“There’s a lot of hatred of development out there,” Nikolai Fedak, the founder of New York YIMBY, told the New York Times. Yet in his mind, anti-development NIMBYs are widely reviled as well, often accused of acting out of pure self-interest rather than what’s good for the community.

His opinion of NIMBYs’ motivation? “Generally it comes from selfish people who don’t want to lose their views” of the city skyline if new buildings go up.

How YIMBYs can shape better cities

Sure, affordable housing is a driving force for YIMBYs, but they also champion sustainable development.

For example, the Colorado YIMBY group Better Boulder says it’s all about “well-designed infill [housing]” and revitalizing vacant buildings. It hopes to “reduce our impact on the climate, encourage less driving, and keep our community welcoming and economically thriving.” In particular, it has opposed Boulder’s outdated street parking regulations that make neighborhoods less walkable.

“Some would argue YIMBY groups are calling for too much development in urban cores, clogging streets with traffic, and overcrowding areas,” says Al Maiorino, president of Public Strategy Group, a public affairs firm in Boston. “They may also feel YIMBY groups are only in search of more affordable housing. The reality is, they care for economic development and bringing affordable and other housing to urban areas. They have successfully changed zoning laws in cities to allow for more residential development.”

What’s next for YIMBYs?

In 2016, YIMBYs celebrated a pivotal win against NIMBYs when the Obama administration released a “toolkit” to help local communities reform overly restrictive land-use regulations strangling the U.S. housing market. In it, YIMBY-friendly initiatives were plentiful, including changes in zoning laws to pave the way toward allowing the construction of more “high-density and multifamily” housing and accessory dwelling units.

The report marked the first time in several decades that the White House elevated local zoning and land-use regulations to a national level. Indeed, President Barack Obama announced at the time, “We can work together to break down rules that stand in the way of building new housing and that keep families from moving to growing, dynamic cities.”

Since then, the tide of public sentiment seems to have turned in favor of YIMBYs—and while concrete progress in the form of actual houses has been spotty and slow to build, the Biden administration seems poised to push a similar agenda ahead.

The Unlocking Possibilities Program within the American Jobs Plan is a $5 billion competitive grant program that helps reform exclusionary zoning, aimed to support more affordable housing along with new land-use and zoning policies that will contribute to this goal.

So while YIMBY as a movement may be younger and smaller than NIMBY, it seems to be turning into a fairer fight by the day.

The post What Is YIMBY? The ‘Yes In My Back Yard’ Movement, Explained appeared first on Real Estate News & Insights | realtor.com®.

3 thoughts on “What Is YIMBY? The ‘Yes In My Back Yard’ Movement, Explained”