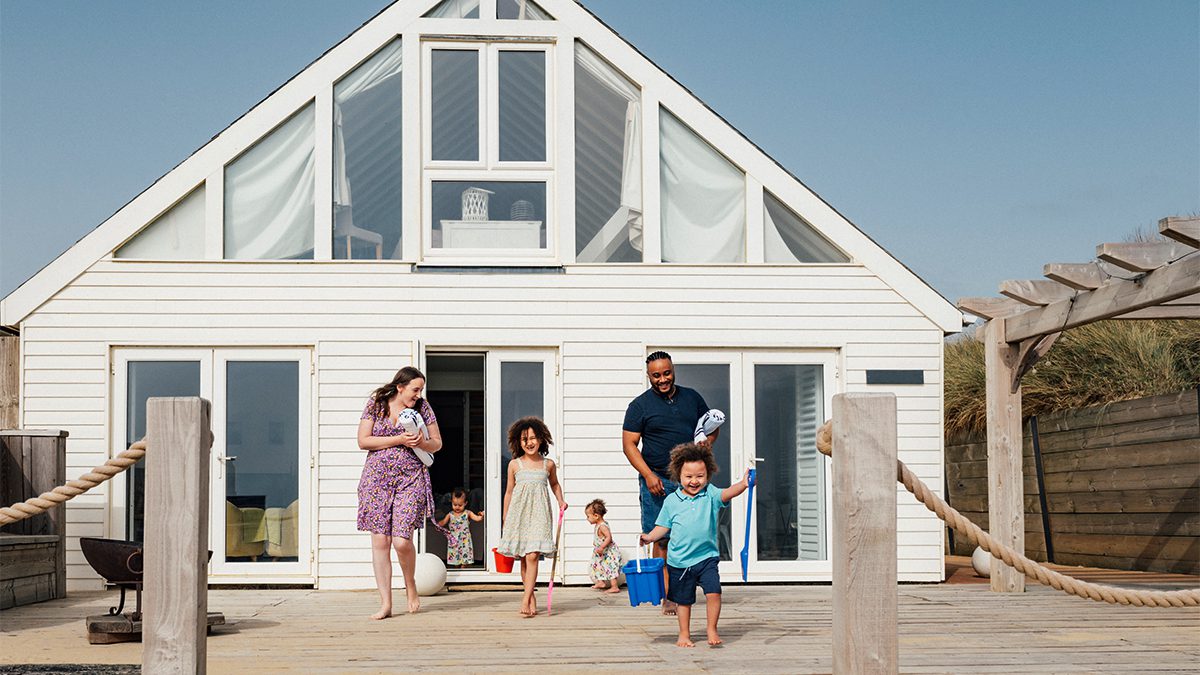 If homeownership is a defining dream of most Americans, then purchasing a vacation home is something deeper still: the American fantasy. After all, in these fraught times, who doesn’t crave a private oasis to retreat from the world? Kids kicking back in a charming rustic cabin! Zoom calls on the lake! A sweet country home far from the usual grind of urban or suburban stress. What’s not to love?

But transforming this particular fantasy into reality has become tougher than ever.

Like the rest of the real estate market, vacation homes are getting far more expensive, putting them further out of reach of many would-be buyers. Some urban dwellers are even choosing to buy a secondary home before securing a primary residence because they can’t afford the type of home they home would like to buy, sending prices even higher. So the Realtor.com® data team went in search of the places where folks can find the most affordable vacation home right now.

These cheaper destinations might not have the name recognition of Cape Cod in Massachusetts or Lake Tahoe on the California-Nevada border, but they’re relatively affordable, not too far from larger cities, and typically near water or the mountains. They offer premium outdoor fun and relaxation at bargain-basement prices. And even as the COVID-19 pandemic (hopefully) winds down, they can serve up still-alluring respites from the crowds.

After peaking in 2020 at the beginning of the pandemic, the number of vacation home sales is down 15% so far this year compared with the year before, according to Realtor.com analysis of mortgage application data from Optimal Blue, a real estate analytics firm. But that’s not due to low demand. Sales are down at least partly due to the lack of inventory and high prices.

As an investment, vacation homes are still delivering big-time. Many buyers are choosing to give up a few choice weekends so they can rent out the properties on websites like Airbnb and Vacasa to help pay for them.

“Vacation rental home buyers often have more range in their budget, because of the anticipated rental income to help cover costs,” Kirkham says.

The median sales price for a vacation home in the U.S. was $429,000 last month, according to Optimal Blue data, compared with the $392,000 median list price for all homes. The data does not account for sales made in cash (a typical method of buying vacation homes for the wealthy).

To be considered a vacation area, second-home sales had to make up at least 20% of all home purchase loans in January and February. (Investment homes were not included.) Each place needed at least 25 second-home purchases the first two months of this year to earn a spot on the list. The list was limited to one metro per state to ensure geographic diversity. (Metros include the main city and surrounding towns, suburbs, and smaller urban areas.)

While the hit Netflix show “Ozark” might have tarnished this region’s reputation for some, Branson is actually a popular, family-friendly vacation destination for those who love the outdoors. Sure, it’s still best known for the dozens of places to see country music and rip-roarin’ live attractions like Dolly Parton’s Stampede, a western-style dinner theater, but Branson is located along 43,000 acres of water, perfect for paddleboarding, kayaking, or boating. Trout fishing is also a big sport here, especially in the clean, cool waters of Lake Taneycomo.

It’s consistently ranked high on our annual Most Affordable Lake Towns list, because of the many different types of properties and price ranges available.

“The Branson area has a very diverse inventory of homes,” says Jim Viebrock, a broker with Murney Associates Realtors in Springfield, MO. From lakefront cabins to condos, there are plenty of options no matter the price range.

Waterfront homes on Table Rock Lake can easily get up to the $1 million range here, but a three-bedroom single-family home with lake views in nearby Blue Eye is on the market for $500,000. A two-bedroom condo in a gated community recently dropped in price.

Those looking for even more of a bargain can head farther inland, where they’ll also have room to spread out.

“In the rural areas around the lakes, there is extreme affordability, and you can get land with them,” Viebrock says.

About halfway between Scranton and Allentown, East Stroudsburg has long been a destination for people from Philadelphia as well as New York and New Jersey looking for an escape.

It’s located in the Pocono Mountains, where there are plenty of things to do year-round, including four-season hiking, lake swimming in the summer, and skiing in the winter. Buyers here get good use out of their vacation homes.

While many vacationers tend to keep to their cabins, East Stroudsburg’s downtown is dotted with quaint shops and restaurants, ideal for spending the day.

A three-bedroom cabin on a lake listed for just $150,000 is available to all-cash buyers, while a two-bedroom lakefront cabin in Stroudsburg was just reduced to $233,000.

About an hour from Milwaukee and situated along the Kettle Moraine State Forest, Whitewater is a fine spot for hiking, mountain biking, or horseback riding through its dappled woods and vast prairies.

In the summer months, locals have access to public beaches and picnic areas, as well as plenty of golf courses. They can also enjoy a free waterski show on Whitewater Lake put on every week by the Minneiska Ski Team. In the winter, the lake becomes a popular ice fishing spot, especially during the annual Fish-A-Ree competition in February.

Home to the University of Wisconsin-Whitewater, this college town has lots of cultural activities as well. Theater productions are put on throughout the year, and there are a host of galleries to explore. Folks who like to entertain can snag a three-bedroom, single-family home with room to spread out just listed for $364,900.

This golf and beach mecca was recently ranked No. 1 on U.S. News & World Report’s Fastest Growing Places in the United States list, and it’s not hard to see why. There are endless options here.

Besides enjoying the long, pristine beach, visitors can play golf on one of 86 courses, stroll the breezy boardwalk, or just chow down on some classic Carolina barbecue.

This coastal city has 60 miles of continuous sand, and builders have been putting up townhomes and condos (popular among second-home buyers) at a rapid pace. A construction boom in recent years keeps prices relatively low since there’s less competition for homes.

“There’s a lot of stuff on the market, a lot of new construction everywhere,” says Tom Parry, a Realtor® at Century 21 in North Myrtle Beach.

For those who don’t mind a short drive from the beach, a three-bedroom new build on a corner lot is on the market for $309,000. An oceanfront one-bedroom condo with plenty of amenities is listed for $184,500.

Nestled in the Great Smoky Mountains, Cullowhee is about an hour west of Asheville, another popular vacation area in North Carolina. It’s a college town, and students at Western Carolina University keep the area busy, with sporting events, art shows, and events throughout the school year.

Outdoor enthusiasts can kayak, hike, and mountain bike in Great Smoky Mountains National Park, or take a scenic drive along the idyllic Blue Ridge Parkway. Water lovers can spend the day at Lake Glenville, which has swimming, water-skiing, and three breathtaking waterfalls to cool off in.

Located in Central Florida, a little more than an hour from Orlando, The Villages caters to a very specific market. At least one resident has to be 55 years or older to live in this master-planned, retirement community—the self-proclaimed and unchallenged “Active Adult Retirement Community” capital of the U.S. with well over 80,000 residents. Most live here full time, but that’s not deterring buyers from scooping up second homes here.

It is so large, it counts as its own metro, and it was also the fastest-growing one in the entire country over the past decade, according to the latest census data. Every day feels like a vacation with complimentary golf, pools, and plenty of bocce and pickleball courts to choose from. And events and clubs throughout the year keep residents’ social calendars busy.

A two-bedroom, one-story home a short distance from shopping is listed for $309,900.

An oasis in the desert, Lake Havasu City is a mecca for both spring-breakers and retirees. While that might seem like an odd mix, with 290 days of sunshine per year and year-round recreational activities, it all starts to make sense.

Situated at the junction of Arizona, California, and Nevada, Lake Havasu attracts visitors from all three states, with many Californians tempted by the comparatively affordable real estate and low taxes. This two-bedroom, single-family home with lake views is on the market for less than $500,000.

This quaint coastal community east of the Chesapeake Bay is filled with historic towns, crab shacks, and natural beauty, including its sandy beaches. Salisbury is a haven for boaters, anglers, and swimmers alike. The bike-friendly city also has plenty of green spaces and woods for landlubbers. A newly constructed four-bedroom home a quick drive to downtown is on the market for $360,000.

Nearby Ocean City, which is part of the Salisbury metro area, is a summer hot spot for city slickers making the three-hour drive from Baltimore and Washington, DC. Located on a barrier island between the Atlantic Ocean and the Isle of Wight Bay, O.C. as the locals call it has miles of beaches to explore. A one-bedroom condo close to the boardwalk was just listed for $180,000.

Claremont might not exactly scream vacation destination, but Bostonians have been making their way there in earnest since the pandemic days. While the 1.5-hour commute might be a bit unrealistic once people start returning to the office, second-home buyers are able to enjoy their investment all year.

Outdoor lovers can kayak and fish along the Connecticut River in the summer, hike among the orange-red leaves during the leaf-peeping season in the fall, or ski at the Arrowhead Recreation Area in the winter. A two-bedroom farmhouse along the river in nearby Weathersfield, VT, is listed below $300,000.

This vacation spot might be under the radar for some, but it’s an idyllic spot in the Great Smoky Mountains that attracts more than 10 million visitors per year.

About 30 minutes east of Knoxville, Sevierville is also the hometown of Dolly Parton (nope, not Branson) and the inspiration behind her hit song “My Tennessee Mountain Home.” Her eponymous theme park, Dollywood, is a short drive away. The region is also popular among people who love to boat and fish. Nearby Douglas Lake is known as one of the best lakes for largemouth bass fishing in the country.

Cabins are key, and they vary from log cabins to chalets to Craftsmans.

Most buyers want the full mountain experience, says Ron Laughlin, a real estate agent at Century 21 MVP, but centrally located properties with community amenities tend to sell at a premium.

“The ones that are closest to town generate the best income,” Laughlin says.

For those looking to spread out, a traditional log cabin on more than an acre of land is on the market for $349,900.

The post Endless Vacations: The 10 Towns Where You Can Still Snag an Affordable (and Great) Second Home appeared first on Real Estate News & Insights | realtor.com®.