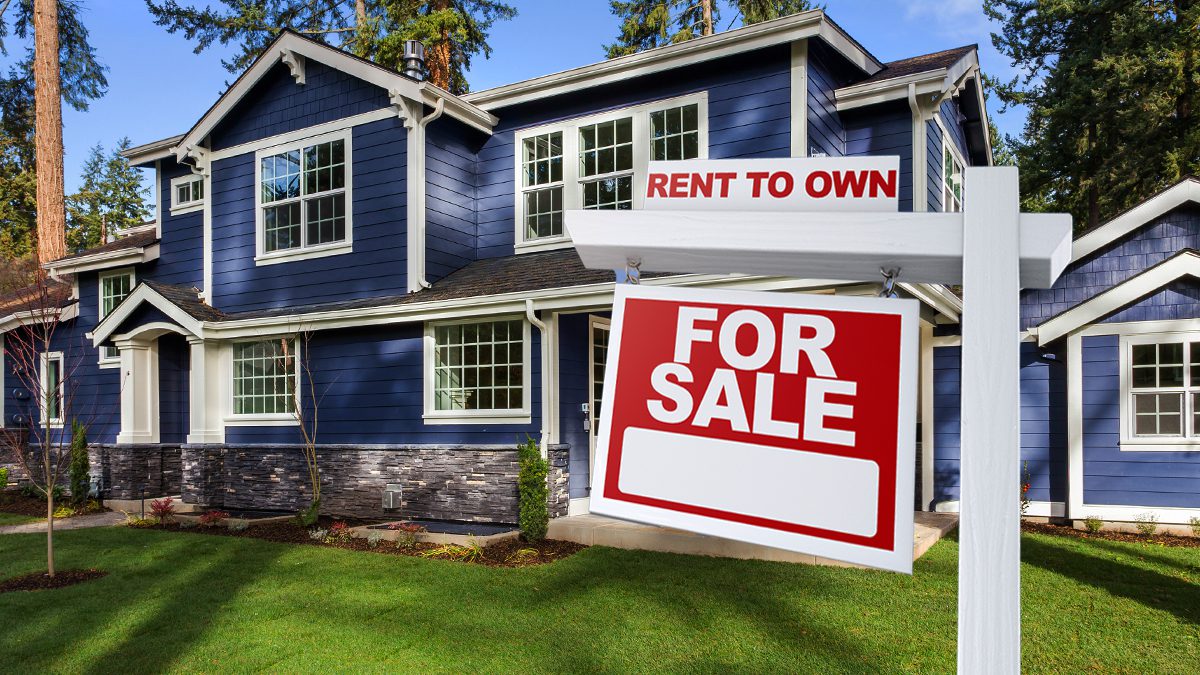 Kevin Santana, 32, and his partner were living in an upscale rental building in downtown Chicago for a few months when he got an email from his landlord about a new opportunity. The developer of his building was advertising a rent-to-own program for a brand-new condo in a similarly posh high-rise being constructed next door.

The advertising agency analytics director had been planning to stay in his rental in the up-and-coming Printer’s Row neighborhood for two years while saving to buy a home. But this program promised to give him a big head start at owning his own place, and he jumped at the chance.

He moved into a brand-new unit in a building with amenities such as a pool with cabanas and game rooms. The deal will cover up to 2.5% of the purchase price by applying 50% of his monthly rent toward the down payment. When he finally closes on his two-bedroom, two-bathroom unit next fall, he will have accumulated an additional $15,000 to $16,000 to put toward closing costs.

“Not having to put down that additional money for closing was really appealing,” he says.

The rent-to-own real estate concept has existed for decades, but over the past several years it has grown substantially in popularity. A number of new products and companies have popped up, including Divvy Homes, Home Partners, Dream America, and more. They’ve formalized what once were mostly one-off deals created by landlords and tenants into an entire business model.

Now the industry is booming, particularly as record-high home prices and bidding wars are making it harder for many first-time buyers to become homeowners. Inflation and runaway rental prices are also making it difficult to save up for a down payment.

How good of a deal these opportunities are depends on each potential buyer and the specifics in the contracts they sign. These programs can help buyers in a competitive housing market. However, in most cases, folks could ultimately wind up paying more than if they just bought a home outright. And the majority of folks involved in rent-to-own scenarios never close on their intended homes, despite often paying a markup.

“The pitch is, this is a way for the consumer to get into the market with 1% to 2% down,” says Barry Zigas, a senior fellow at the Consumer Federation of America. “But the question is, what is the cost for that money and how does it compare to a mortgage?”

How do rent-to-own programs work?

Santana’s program, for example, was set up by the developer, Lendlease, as a way to increase preconstruction sales for its newest condo building. As soon as a tenant at the Cooper rental building, where Santana lives, signs the contract, half of the rent gets applied toward 2.5% of the purchase price for the new condo at the Reed, the new building next door—up to $25,000. Unlike with most of these programs that charge extra fees on top of the monthly rent payment, the future Reed homeowners who are residing at the Cooper do not pay anything on top of the rent they had already locked in before signing up for the deal.

In Santana’s case, half of the monthly $2,950 he pays for his townhome—which is significantly below the current market rate of $4,000 to $5,000 because he signed the lease for his “pandemic special” in early 2021—is being applied toward his purchase. (The lease was locked in when renters were leaving the big cities in 2020, so landlords offered deals.) So half of his already reduced rent goes toward paying for the unit he is going to buy.

Lendlease, the developer of The Reed and The Cooper, admits the deal was designed to sell new units quickly, which was especially important given that the city’s condo market never fully recovered from the 2008 crash.

There are different ways of structuring lease-to-own deals. Most include either an upfront option fee (usually 1% to 5% of the purchase price) and/or higher than market-rate rent that is applied to the principal for usually one to three years. In most cases, those extra fees cannot be recouped by buyers who don’t end up buying the property.

The uptick of these long-established contracts where renters pay an extra monthly fee that is intended to contribute to a down payment has some real estate experts concerned.

“Rent-to-own schemes are seldom the most economically efficient way for a consumer to buy anything from furniture to houses,” says Zigas. “Generally, a borrower will have more security and more access to wealth building if they have a simple purchase agreement with the seller and get a mortgage to buy a house.”

Most of these renters who cannot get a mortgage or down payment together at the beginning of the agreement are still unable to get it together when the time comes to exercise the option. That’s why the conversion rate overall has not changed much over the past 30 years.

Divvy Homes, a venture capital darling estimated to be worth $2 billion, claims nearly half of its customers end up buying properties. (Realtor.com® was unable to independently verify this figure.)

After a customer fills out an application, which includes a soft credit check and questions about income and current rent, the company offers the customer a pre-approval and a budget for finding a home. Like any regular real estate deal, the customers seek out properties with help from their real estate agent. But instead of going through the traditional mortgage process, the company makes an offer to buy the home with the customer putting down between 1% and 2% of the purchase price of the home.

So buyers still need to come up with a down payment—it’s just significantly lower than the regular 10% or 20% of the home price.

The deal is laid out in a three-year lease that includes two different prices for buying back the house—within 18 months or after 18 months—that are determined by the company’s evaluation of the market.

Divvy makes its money off of that appreciation as well as the market rent it is charging customers. So the company is essentially acting as a landlord who not only has the monthly mortgage covered by the renters but then makes money off the increased value of the home when it sells.

Most frequently, a major life change like a job relocation, divorce, children, or other event is what prevents customers from buying the homes. Less often, it is about their inability to qualify for a mortgage, says Egan.

“In most circumstances, it’s the customer saying, ‘this just is not for me anymore,’” says Egan.

In those cases, the customer gets back 100% of the equity they contributed (an amount that gets paid on top of rent and is put into an escrow account that should equal 3% to 10% down by the end of the three-year lease) minus a surrender fee of 2% of the original purchase price. On a $100,000 house for which a customer puts down $2,000 for a three-year lease that has built up $10,000 in savings equity, the customer would get back all of the money minus that $2,000 down payment.

Companies like Divvy often have more lenient approval processes than typical banks. The minimum credit score to qualify is 550 (which can work for an FHA loan, just with a much higher interest rate than a borrower with a very good score), and the maximum debt-to-income (DTI) ratio the company approves is 50%, which is right at the top of what FHA will approve.

“A lot of folks who use Divvy need a down payment to buy a home,” says Egan. “Other customers use the product because they’re moving to a new city and want to try out a neighborhood, or [they] just started a new job and need six months of income for a loan.”

Dream America, another rent-to-own specialist, accepts a minimum credit score of 500 with a 50% maximum DTI as long as the applicant has the income and funds needed for an FHA or VA loan (which requires a minimum 580 credit score) approval and an upfront payment equal to 1% of the 12-month purchase price.

Home Partners is a bit more stringent on the DTI, with a maximum of 45%, but its website claims the minimum credit score requirement varies by market and it takes the average credit score of all household members who will contribute to rent. Renters can exercise their right to purchase at any point during their one-year lease, which automatically renews every year up to five years in most states (three years in Texas). There is a predefined price to purchase the home for each year of the lease; however, if the home appraises for less than the purchase price, Home Partners is willing to terminate the contract and return all the earnest money.

What consumers should consider before entering a rent-to-own arrangement

While these programs have certainly come a long way in the past three decades and do accommodate some gaps in the conventional mortgage market, potential customers need to be wary and ask themselves and the companies some serious questions.

What happens if the price of the home exceeds its market value at the time of purchase? And what do they stand to lose if they can’t pull their finances together to qualify for a mortgage?

“If they were unable to buy a home when they started the lease option because they didn’t have a down payment, credit, or income, there’s a good chance that at the end of the option that situation has not changed,” says Reed. “They’re not likely to ever get a mortgage.”

But for folks like Santana, who have solid finances and some sort of life situation that makes rent-to-own worth their while, it can sometimes work to their benefit.

“Rent-to-own wasn’t a make or break for me,” says Santana, who just wanted the free money to buy a place in the kind of building that he already enjoys living in. “I still would have been able to put together a down payment in absence of the program.”

The post Can’t Afford a Down Payment? Rent-to-Own Companies Promise To Help, but Are They Worth the Risk? appeared first on Real Estate News & Insights | realtor.com®.