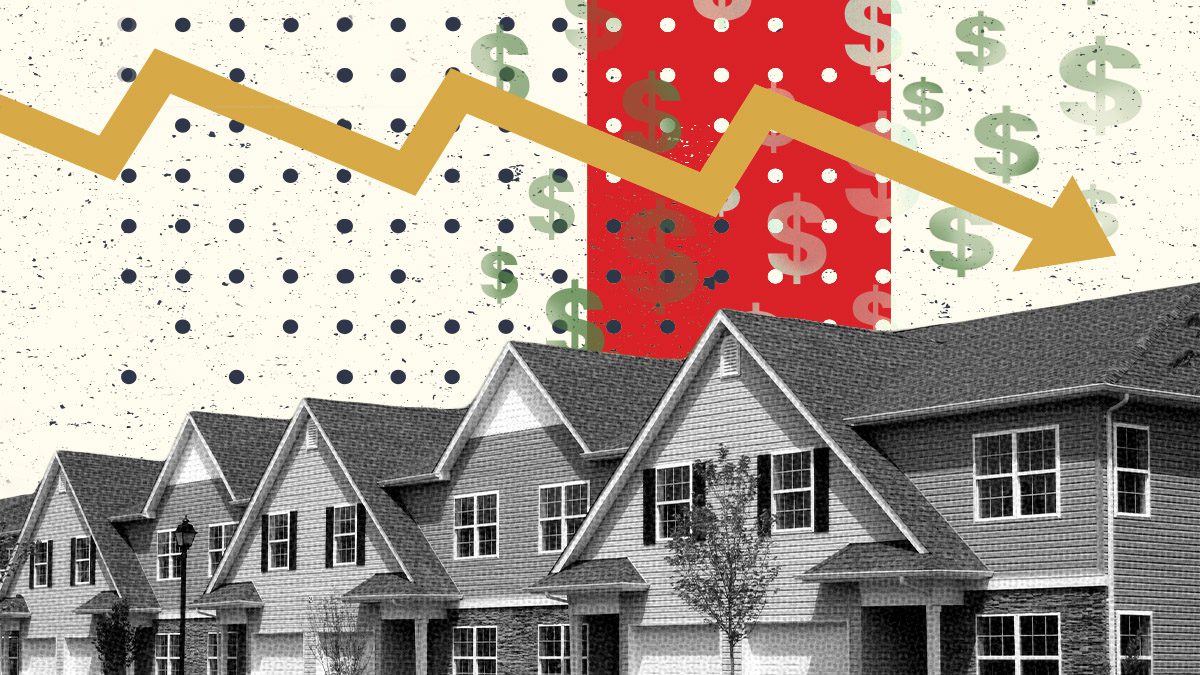 What goes up must come down, right? Well, Newton’s law of gravity has been pressure-tested in recent years as homebuyers have anxiously watched home prices shoot up and up, to record heights in the wake of the COVID-19 pandemic. Double-digit monthly price growth in many hot markets? Check. Panic and despair settling in among many wannabe homebuyers? Check.

The spring housing market got off to a strong start, but rising mortgage interest rates topping 5%—plus high inflation and soaring rents—appear to be starting to temper high prices in certain housing markets. To be clear: Overall affordability remains a challenge. Many would-be buyers are being priced out of homeownership as higher mortgage rates mean more expensive monthly housing payments. But when there are fewer buyers competing for homes and bidding them up, prices typically go down.

Realtor.com® found the metropolitan areas where home prices are doing what recently seemed unthinkable: They’re falling. Some of these dips are because prices grew too out of whack with what locals in many Rust Belt communities could afford. So prices had to come down a little to find buyers. In other cases, it’s not that the same house costs less. Rather, the lower prices are due to fewer larger homes, which generally fetch higher prices, going up for sale. (Metros include the main city and surrounding towns, suburbs, and urban areas.)

“Many of the metro areas seeing median list price declines have seen an [influx] of smaller homes come to market, which carry lower price tags,” says George Ratiu, manager of economic research for Realtor.com. “At the same time, several of the cities have unemployment rates, which, while still historically low, are above the national level. [This indicates] that buyers may face steeper affordability challenges from rising mortgage rates.”

This is not a repeat of the Great Recession when a housing bubble popped and prices plummeted across the country. These are mostly smaller decreases that don’t portend another crash.

To figure out where prices are moving south, the Realtor.com data team looked at the year-over-year median list prices in the 100 largest metros in March. To ensure geographic diversity, we limited our list to just one metro per state.

Ready to see where buyers can get a home for a little less?

Toledo has had some of the not-great luck most Rust Belt cities have experienced over the past few decades. The city already had major job losses in the 2008 recession, then the closure of the Jeep Cherokee plant 10 years later put 3,700 more workers out of a job. Builders stopped building homes. By the time a new Jeep Gladiator plant opened in 2019, there was a huge lack of homes on the market, which caused home prices to go up.

While bidding wars are still common, it seems prices are starting to cool down. Unemployment is higher in Toledo than in the rest of the U.S., so home prices can go only so high before residents get priced out.

“I have more and more buyers that are starting to lean toward ‘We’ll do some cosmetics, we’ll do some work,’” says Karen Kinder, a Realtor® with Key Realty, on the choices her clients are making to save money. “They’re open-minded to that now; even just a few years ago, they all wanted everything all fixed up.”

There are plenty of deals here for very low-priced homes, including this three-bedroom for just $39,900.

Rochester’s housing market has been red-hot since summer 2020 when buyers were in a frenzy attempting to snap up the few listings that had come onto the market—and folks who could suddenly work from anywhere were moving in.

Demand is still high, but an increase in new listings in the Flower City is making a dent in the housing prices. Like with many of the cities on this list, it appears that local investors have been trying to take advantage of these record-high price increases, selling off former rentals before rising interest rates make it too hard for entry-level buyers to afford the monthly mortgage payment.

This three-bedroom, one-bathroom Colonial is on the market for just $164,900.

Already struggling with the loss of auto manufacturing, Detroit got hit hard by the Great Recession, exacerbating a multidecade exodus of residents. But the story of America’s favorite comeback city has changed in the past 15-years.

It started with more artists seeking cheap housing who wanted to see Motor City revived to its former glory. Then developers and prospectors came to inflate real estate prices in spite of its still dwindling population. But many locals can’t afford those homes, especially with higher mortgage rates.

Meanwhile, the number of new listings has increased by 6.7% year over year in March, according to Realtor.com. That means buyers don’t have to bid quite so high when there are more options available.

Those who are looking for a deal and don’t mind putting some work in can check out the many fixer-uppers on the market. This three-bedroom brick home listed for 59,900 is marketed as an “investor’s special.”

House hunters in Pittsburgh have been struggling to get properties under contract. Recent interest rate hikes have weeded some buyers out and have deflated a bit of the pressure, but competitively priced homes are still receiving multiple offers, often from folks who are moving to the area or moving back from other parts of the country.

“I personally have had multiple buyers who say, ‘We just have to wait,’” says Bobby West, a real estate agent with Coldwell Banker. “When you’re writing offers on seven to 10 houses, I think you lose a little bit of interest.”

Given the competition, it is a bit surprising that listing prices have decreased. However, West says, he has seen a lot of absentee landlords throwing their rental properties onto the market to capitalize on the heat. Those listings are often a little less expensive and provide more affordable opportunities for buyers to become homeowners.

In Penn Hills, a Pittsburgh suburb, buyers who aren’t afraid of some elbow grease can find a growing number of homes listed at ultralow prices, including this $110,000 four-bedroom Cape Cod.

Just an hour and a half away from Boston, Springfield attracted tons of new residents who were untethered from the office during the pandemic. Last spring, prices shot up so drastically, that even real estate professionals were wondering whether the increases were rooted in any sort of reality as buyers moved farther and farther out to find more affordable real estate.

However, those price hikes might not have been sustainable. In January, the CoreLogic Market Risk Indicator, which looks at the health of housing markets across the country, predicted that Springfield was one of the cities at the highest risk (50% to 70% probability) of a decline in home prices over the next 12 months.

While the price per square foot has not dropped yet, smaller homes have been coming onto the market, including this two-bedroom bungalow for $215,000.

The former “Oil Capital of the World” has long offered buyers great deals on giant homes. This five-bedroom mansion asking for $1.2 million is less than the cost of a two-bedroom condo in San Francisco. Right now, affordable homes are scarce in Tulsa, known for its art deco architecture, and buyers are waiving contingencies.

But, like several places on this list, the city’s median listing price has been affected by the uptick of smaller homes coming onto the market. While the price per square foot has increased, these smaller properties are bringing down the median listing price for the entire city. That’s helping some buyers get in.

Buyers who don’t need a lot of space can find deals. A good example is this 875-square-foot, three-bedroom house in the Brookside neighborhood asking for $225,000.

Given that home prices in Los Angeles are already so unreachable for so many buyers, the hike in interest rates has forced a lot of wannabe homeowners out of the market. However, the farther out buyers go from the Los Angeles Basin, the more inventory has grown and home prices have at least flattened a bit.

“I’m seeing a lot of [contract] cancellations by the time interest rates have been locked into place,” says Rafael Oseguera, a Realtor at Pacific Inter Capital Investment Solutions. “We are starting to see some home values taper off.”

Real estate agents are reporting that bidding wars are dying down and price reductions are becoming more common. Attractively priced, move-in ready homes are still receiving multiple offers, but not nearly as many as they were before mortgage rates increased. That’s keeping high offers over asking price in check.

“There’s still not that much inventory; there’s still bidding going on,” says Oseguera. “It’s just not as aggressive as it was three or four months ago.”

Plus, all throughout the metro, smaller homes have been coming onto the market, bringing down the median list price. For example, this 800-square foot, three-bedroom house in the L.A. suburb of Palmdale is asking $344,999, which is very affordable for California.

Memphis real estate surged since the start of the pandemic. The metro, long popular with investors buying up inexpensive properties to rent out, saw a rush of buyers attempting to get into a limited number of homes. Those buyers were often competing for larger places in suburbs where they could upgrade to bigger yards with play areas and, in many cases, swimming pools.

That rush led to the city becoming one of the most overpriced housing markets in the country, according to a report from Florida Atlantic University’s College of Business earlier this year.

A lot more homes have come onto the market recently. New listings are up 5.4% from the same time last year, according to Realtor.com. Meanwhile, smaller homes are going up for sale. That’s helped bring prices down.

There are more deals in the Windy City if buyers don’t mind living in a condo. An overabundance of condo buildings downtown is one factor dragging down prices in the metro area. There are at least 6,000 units on the market right now.

That provides opportunities for buyers on a budget to get into the housing market at a lower price point.

This one-bedroom condo with views of downtown near the Dearborn Park neighborhood is asking for $185,900. It has been listed multiple times with one price cut since the start of the pandemic.

There simply aren’t enough entry-level homes to meet demand in Richmond right now. Since prices have risen so much and bidding wars are all but expected, a lot of homeowners who have comfortable houses in the lower price ranges are too scared to sell and trade up, because they worry they won’t be able to find another place they can afford to live.

So why have listing prices decreased? Two reasons, says Jenny Maraghy, CEO and founder of the Jenny Maraghy Team. One is the influx of smaller homes that come onto the market, such as this two-bedroom cottage asking for $199,000. The other is that most local agents underprice homes to help with marketing.

The post Home Prices Have Begun Falling: Here Are the Cities Where They’re Down the Most appeared first on Real Estate News & Insights | realtor.com®.