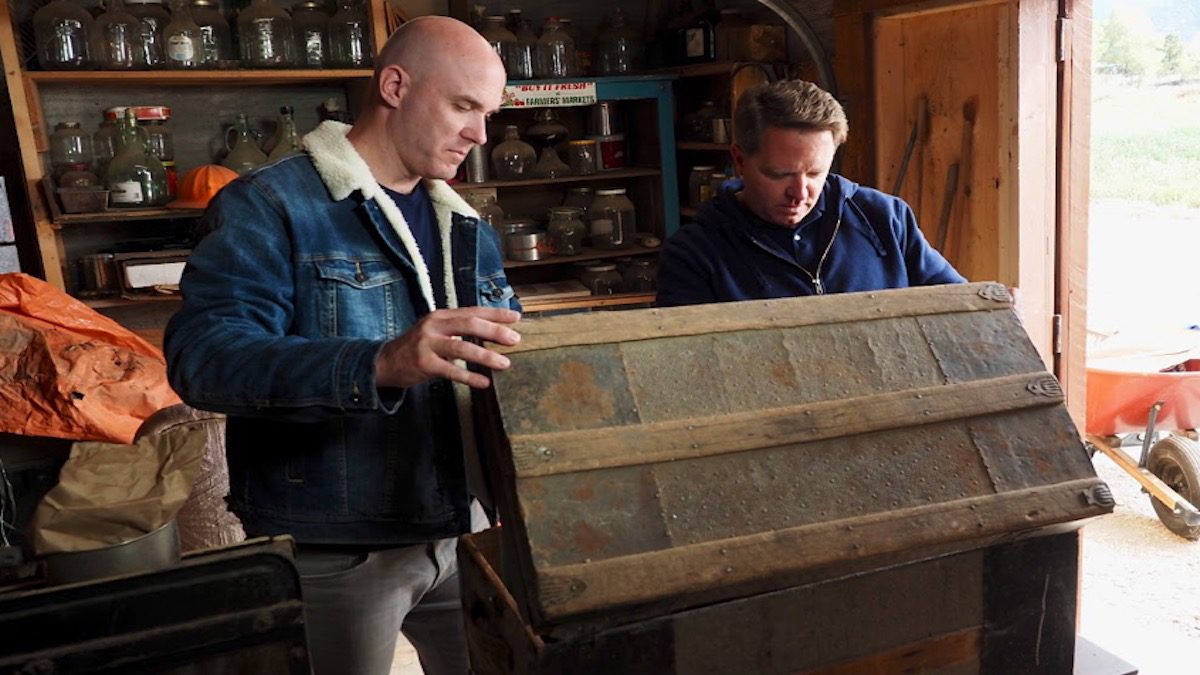 Americans have been buying homes and relocating in record numbers over the past couple of years, and Max Paxton is among the few who know just how hard this process is.

Paxton has been helping people declutter their homes for years, both on A&E’s “Hoarders” and the Emmy-nominated PBS show “Legacy List with Matt Paxton.” He’s also the author of the new book “Keep the Memories, Lose the Stuff,” which is full of lists and tips for anyone looking to relieve themselves of the many extraneous possessions that pack their attics, basements, and beyond.

This Richmond, VA, native recently had to practice what he preaches while moving to Atlanta. In fact, he moved when he was right in the middle of writing his book—and had to rewrite large sections of it since he learned so much in the doing.

Curious to hear more about why decluttering is just so hard to do—especially when it’s your own stuff—we chatted with Paxton about what he learned during his own move. He also dished plenty of guidance on what to purge—as well as the few things you should keep—whether you’re downsizing, moving, or lightening your load.

How did you become a decluttering expert?

I got into this industry because, when I was 24, my dad, my stepdad, and both my grandfathers died in the same year. So I had to clean all their houses. That was the beginning. I’ve learned a lot since then, especially recently, when I had to deal with a lot of their stuff that had gone into my attic.

When decluttering a home, you suggest making a legacy list. What is that exactly?

You pick five or six items that are most important and tell your family story. I really encourage you to do that upfront and early, because that enables you to start to let go of things that are a little more mundane and don’t matter as much.

Where this really pays off is when you get into the garage. You find stuff [and], you’re like “that’s my grandfather’s car charger.” But you don’t care, because you’ve already told the big story about Grandpa. You’ve already celebrated him.

What types of things do you suggest we put on our legacy list?

Legacy list items are rarely expensive; they’re usually highly emotional. Once we were going through the home of a family whose mother started the first Mexican restaurant in Richmond. They put their mother’s recipe book on their legacy list. She had written down all of her recipes on her way to America. That restaurant eventually became a Hispanic Cultural Center. The recipe book told her story.

So you pick a few things that tell their story, and get rid of the rest?

That’s right. I like to say, “You don’t miss the stuff; you miss the people attached to the stuff.”

Is there one thing people should never throw out?

Yes, keep important paperwork like wills, financial documents, seven years of tax records, and the last two years of medical records. But when it comes to possessions, no one has ever said to me, “Man, I wish I kept…”

What about collections that could be valuable?

Baseball cards and “Star Wars” collections are the things people talk about most: “My mom threw out my baseball card collection!” But you really don’t want the stuff; you just want the money. You don’t miss stuff; you miss people.

How about items you should always throw out?

China you can always get rid of. Nobody wants the china. That makes people upset, but most people don’t have dining rooms anymore. Ask the family if anyone wants it, and if not, just sell it or donate it. Table linens, silverware, anything in the dining room. Nobody wants it. Even dining room furniture. It was a big deal when our parents and our grandparents were coming along, but not for the next generation.

I was coming out of a divorce when I moved, and we were both like “No, I want you to have the china!” We never used it. Also, always get rid of your clothes that are two sizes too small that you keep hoping you’ll lose weight and fit into again. You’re not gonna.

What is the most unusual thing you’ve ever come across when helping someone clean out their home?

We found a bazooka once—a rocket launcher in the trunk of a ’67 Stingray Corvette. The car was beautiful, candy-apple red, and I opened the trunk, trying to find the paperwork, and there it was: a rocket launcher!

The people I was helping are like “Oh, Dad! That was so like him!” And I’m like, “I gotta call the bomb squad!” But we had a military expert on site, and he told us it was just the launcher. There was no rocket in it.

What would you say is the most valuable thing you’ve ever found?

One guy, he knew there was a Picasso painting somewhere in the house. It wasn’t a $20 million painting, but just a sketch Picasso had done for a friend, the guy’s dad. We knew it was in the house, and we found it. But right underneath it, we found two Salvador Dali paintings. Those were legit!

Wow! Were those paintings sold rather than going on a legacy list?

Oh, yes. And the proceeds significantly changed that family’s life.

Why do people feel the need to hang on to so many things that have no sentimental or financial value?

Guilt is a big reason. Somebody left you something 50 years ago, and you didn’t like it, your mother made you take it, you didn’t want it then, so now you’re trying to make your daughter take it. These items are being guilted for three generations.

When people are moving, they’re often tempted to throw everything in boxes and say, ‘I’ll go through it later, after we get there.’ How do you convince them to do it sooner rather than later?

That’s great in theory, until they have to pay for those boxes and the people to move them. So I tell them to check out the calculator I’ve created on my website that lets people see how much time and money it’s going to take to pack up their house.

When they go through it, they’re like “This is going to take a month and a half” or “It’s going to cost me $25,000!” Then they say, “OK, I gotta downsize.” The spreadsheet speaks louder than the spouse—no offense. Let the math be the one that decides.

The biggest mistake people make is they try to take on too much. Don’t try to tackle it all in one weekend. You’ve got to really baby-step it. Just get started, and don’t try to do too much too early, or you’ll quit and never finish. Don’t try to tackle the garage or the attic all in one day. Go the opposite way, start small, like a drawer or a shelf. Or the junk mail on the dining room table that you haven’t used since last Thanksgiving.

What should you do with all the belongings you’ve decided to toss?

I’m really big on donate, donate, donate. In all fairness, I am Goodwill International’s decluttering expert. You can drive right up, and people will lift it right out of your car. It’s good because you’re not throwing it away. It’s being recycled.

How do you handle these concepts in your own life, now that you’re living in Atlanta?

We are practical minimalists. We have stuff, we just don’t have a lot of it. As cheesy as it is, there’s a lot more in life with less stuff. Everyone’s finding that coming out of the [COVID-19] pandemic.