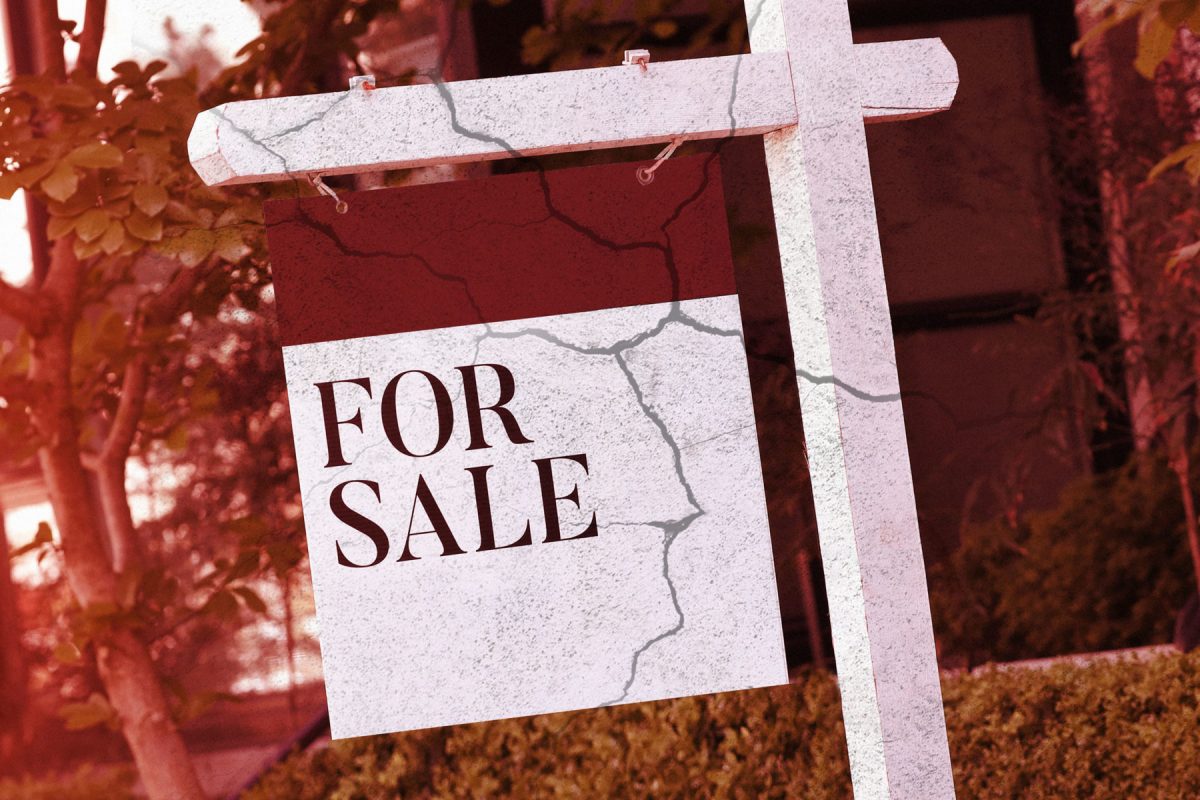 Cracks are beginning to appear in the red-hot housing market.

Spiraling mortgage rates on top of record-high and still-rising home prices are leading many experts to predict the real estate market is on the verge of a correction—if it isn’t already in one. They anticipate home prices will flatten, or even go down a bit, in certain markets.

Home sales have already been dropping; fewer buyers are seeking mortgages because they can’t afford the double whammy of high prices and rates on top of soaring inflation. Real estate agents are reporting smaller bidding wars and sellers cutting prices. Prices have even begun falling in a few parts of the country.

“A housing correction has begun,” says Mark Zandi, chief economist at Moody’s Analytics. “There are a growing number of cracks in the housing market, and they’re going to turn into fissures and fault lines in the coming months.”

Median home list prices in America hit a new high of $425,000 in April—up 14.2% in just one year, according to the most recent Realtor.com® data. Meanwhile, average mortgage interest rates climbed to 5.25% in the week ending May 19. That’s a 75% increase in a year’s time.

The result is that new buyers would be paying about 50% more for the same home compared with a year ago in their monthly mortgage bills. And that’s greatly diminishing the buying power of many Americans—especially during a time when inflation has hit a 40-year high, gas prices have spiked, and even rent levels are nationally hitting new highs.

However, experts don’t believe the market is in a bubble or a crash is in the cards, like during the Great Recession. The nation is still suffering from a housing shortage that has reached crisis proportions at a time when many millennials are reaching the age when they start to consider homeownership. That’s likely to keep prices high.

In addition, lenders are giving mortgages only to the most qualified borrowers. These buyers are less likely to wind up in foreclosure. And prices aren’t expected to plummet unless another wave of foreclosures and short sales sweeps through the nation.

“Housing goes in big cycles. You see booms and busts frequently in real estate,” says Bill McBride, author of the economics blog Calculated Risk. He predicted the last housing bust. “Right now is a boom. But we will see a time when there’s open houses and there are only looky-loos and crickets.”

For now, homebuyers, especially first-timers, are feeling the pain. In the past two years, prices have risen 32.4%. With higher prices come higher down payments. Saving up that ever-increasing sum is no easy feat when the cost of just about everything has jumped and there have been steep drops in the stock and cryptocurrency markets.

Many have been forced to postpone their homebuying plans. Mortgage applications from buyers hoping to purchase a home dropped 15.2% year over year in the week ending May 13, according to the most recent survey from the Mortgage Bankers Association.

“There’s no way that enormous jump in housing costs isn’t going to affect buyer demand,” says Patrick Carlisle, chief market analyst in the San Francisco Bay Area for the real estate brokerage Compass. “It’s also coupled with the highest prices in history. That can’t not have an impact.”

Sales dipped 2.4% for existing homes in April and nearly 13% for newly built residences in March, according to the most recent National Association of Realtors® and U.S. Census Bureau and the U.S. Department of Housing and Urban Development data. (New-home data is for sales and properties for sale.)

“As the year progresses, we’ll see home sales slow further,” says Realtor.com Chief Economist Danielle Hale. “Buyers are going to be more discerning. People are likely to think twice before stretching to the edge of their budgets with the prices of everything going up.”

How much could home prices fall?

Home prices have yet to catch up with the hard realities of today’s housing market. Median list prices were 15.9% higher year over year in the week ending May 14, according to the most recent Realtor.com data.

The disconnect is likely because many buyers locked in their mortgage rates before they shot up so much. Buyers might not realize they no longer qualify for as much money as they did when rates were lower or how much higher their monthly payments will be. And sellers are still seeing record sale prices and are reluctant to accept anything less. The result is the market will take a little time to adjust.

However, price cuts on listed homes were up 12% compared with last year, according to April data from Realtor.com. Experts predict fewer bidding wars and less outrageous offers over asking prices, which could also keep prices in check.

Most real estate experts predict prices will flatten, rather than drop nationally. There are still too many would-be buyers than there are homes for sale.

Another influx of cheap homes going up for sale, which would bring down prices across the nation, isn’t likely either.

“What really drove down prices were all of the foreclosures and short sales,” says McBride of Calculated Risk. Today, “the vast majority of people don’t need to sell. Without short sales and foreclosures, you don’t have the downward pressure on prices.”

Which housing markets are most vulnerable to falling prices?

Not every housing market is likely to emerge from a correction unscathed. Vacation areas, the Rust Belt and other parts of the country with weaker economies, and the lower end of the market could be hurt most by the changes underfoot. Cities with extremely high prices and high crime could also be affected.

“Second-home markets get hit hardest, fastest in a shift to a cooler market,” says Carlisle. Even though these are typically wealthier buyers, many have been affected by the downturns in the financial and crypto markets. “Nobody has to buy a second home.”

Lower-priced homes and communities where prices are more affordable could also be deeply affected. While it sounds a bit counterintuitive, buyers in these price ranges typically need mortgages. And they’re likely to have a harder time amassing down payments and qualifying for large-enough loans with these higher mortgage rates.

“One wild card in all of this is investors,” says Zandi. “They have a lot of cash to deploy, so they could keep the market going more strongly.”

The work-from-anywhere phenomenon is likely to play a part in which real estate markets continue to see price spikes—and which falter. If professionals can continue working remotely, some will likely leave the nation’s most expensive cities. Crime could also be a deterrent.

“The areas where it is super expensive and people are moving out will naturally be vulnerable to some price corrections,” says Lawrence Yun, chief economist of the National Association of Realtors. He believes the San Francisco Bay Area and New York City could be vulnerable.

The Bay Area is already seeing the start of what could become a correction.

“The market is definitely shifting and becoming cooler, and that’s becoming clearer day by day,” says Carlisle. “There are fewer buyers at open houses, there are fewer offers on new listings, and sometimes no offers. Price reductions are just beginning to creep up.”

Smaller cities where there aren’t enough high-paying jobs for locals to support these sky-high prices could also be on shaky ground. Already, prices are falling in some of these areas, predominantly in the Rust Belt.

However, Yun doesn’t believe there is any reason for folks to panic.

“If there is a correction, it will be a brief duration,” says Yun. “We may see some price reductions for one year before popping up again.”

More homes are going up for sale

Amid all of the uncertainty, a bright spot for buyers is the number of homes for sale is beginning to rise. Instead of inventory continuing to fall, about 5% more homes were on the market in the week ending May 14 compared with a year ago, according to Realtor.com data. Active listings ticked up 0.2% in the prior week.

That might not sound like much, but it was the first time there has been an increase in housing inventory since the end of June 2019 before anyone had ever heard of COVID-19. Prices surged by so much in response to the lack of properties for sale.

“The housing market is at a turning point,” says Hale of Realtor.com. “We’re starting to see signs of a new direction, but the ball is still in sellers’ courts in most housing markets.”

The post The Housing Market Is Showing Signs of a Correction: What This Means for Buyers and Sellers appeared first on Real Estate News & Insights | realtor.com®.