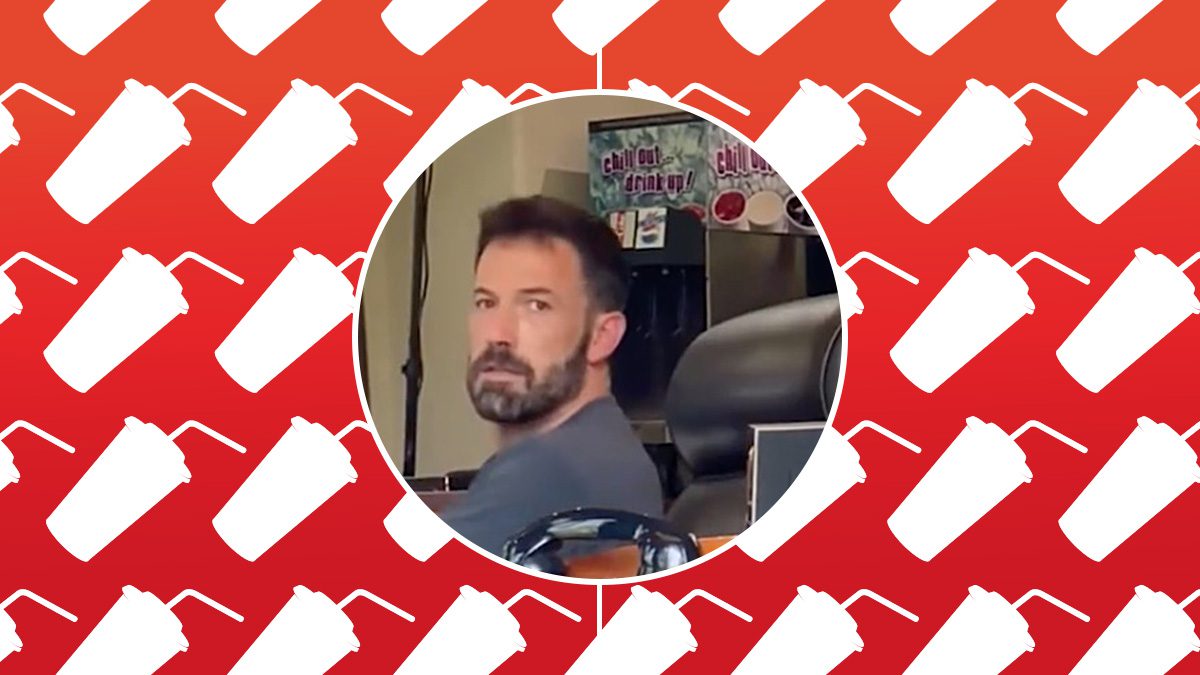 In a Father’s Day post on Instagram, Jennifer Lopez feted her fiancé with a video montage and extolled his virtues as a father. As we all know, the duo have been tabloid darlings since getting back together after splitting up decades ago.

One image showed him in what looks to be his home office. The sharp eyes of the internet spotted a soda fountain—the kind you see at fast-food joints everywhere—just out of arm’s reach by his desk.

Further sleuthing seems to show both Diet Pepsi and Diet Coke dispensers in a single soda fountain. To which many say: Heresy!

j.lo posted a father's day vid of ben affleck, and he appears to a diet pepsi fountain in his office?? pic.twitter.com/fK3ha8B55I

Of course, this discovery led to serious soda speculation—and a fair amount of begrudging respect.

“Pepsi and Coke products in the same fountain….the wealthy truly live in another realm of existence,” added @SlayerNortyOG

Pepsi and Coke products in the same fountain….the wealthy truly live in another realm of existence

But is an in-home soda fountain just reserved for the rich and famous? Can we all drink from a copious fountain of many flavors? We called around and a few answers bubbled to the surface.

Can I have a soda fountain in my house?

The good news: You can live the soda fountain dream in your own home—and you don’t have to be embarrassed about it.

“They’re not that crazy. People have them,” says Craig Williams, owner of Willtec At Home Soda company.

Over the years, he says he’s shipped systems to plenty of celebrities, including Dennis Rodman, Mariah Carey, and Charlton Heston.

While commercial sales make up the bulk of his business, the pandemic spurred growth in the home market.

“Everyone wants one for their house,” he says, noting that sales of soda fountains for private residences have tripled.

Of course, not all soda fountains are created equal. Williams’ Southern California–based business has fielded requests for installations on the flybridge of yachts, on every level of a three-story home, on terrace bars, and in home theaters.

As for installation, they can be placed in a private home as long as there’s easy access to a waterline and electrical power.

The systems range in size from countertop to full towers like you’d see in a fast-food restaurant.

And we have great news for fans of fountain drinks and feature films. You can procure the same two-flavor dispenser Affleck has for $2,795.

The systems come with refrigeration dispensers, CO2 tanks, as well as plastic bags of soda syrup in boxes  (“bag-in-boxes”).

The ratio of 5 ounces of water to 1 ounce of syrup will generate 30 gallons of your favorite beverage. For most folks, a bag generally lasts around six months.

The cost depends on the beverage and ranges between $50 and $150 per bag. Refills can be procured at Walmart or Sam’s Club. For example, a Dr Pepper syrup bag-in-box at Sam’s Club currently runs $110.

What are the benefits?

In addition to feeling like a movie star, you can also feel good about making a green choice.

“Nothing goes to landfill. People are tired of lugging cans,” says Williams.

He also touts the ease of enjoying a cold beverage: “It’s soda on demand. It’s more of a convenience than anything else.”

Most soda aficionados emphatically attest that fountain drinks are superior. What makes each soda dispenser unique is a combination of carbonation, temperature, and the ratio of syrup to water.

“A true fountain drink will never taste like a drink out of a can or a bottle,” says David Bates, owner of Soda Bar Systems. “With our units, you have full control over the unit. It will come out ice cold. It will come out as sweet as you want and as carbonated as you want.”

He also broke down the beverage hierarchy for us: “A beer out of a glass bottle will always taste better than one in a can. But one off the tap will blow both of them away.”

Can a soda machine have both Coke and Pepsi?

Unlike restaurants that might get their systems directly from Coca-Cola or Pepsi, your at-home system can be filled with any brand you choose, says Williams.

But you do need specific fittings for each of those brands. He’ll send you the setup for each one—red connector for Coke and green for Pepsi—if you’re into that sort of thing.

What are the downsides?

Here’s where being a celebrity—and having a celeb-sized bank account—comes into play. Systems start at around $3,000 and go up from there, depending on how many flavors and fountains you want.

If you have a few free hours and want to tackle the installation yourself, no problem. But it might be an issue if you’re not handy. And installation courtesy of a local pro will add another expense. Also, be prepared to figure out your ice situation. These drink dispensers don’t come with cubes on demand.

If you’re successful, you’ll have a sweet drink station customized to your carbonated beverage choice—just like Bennifer.