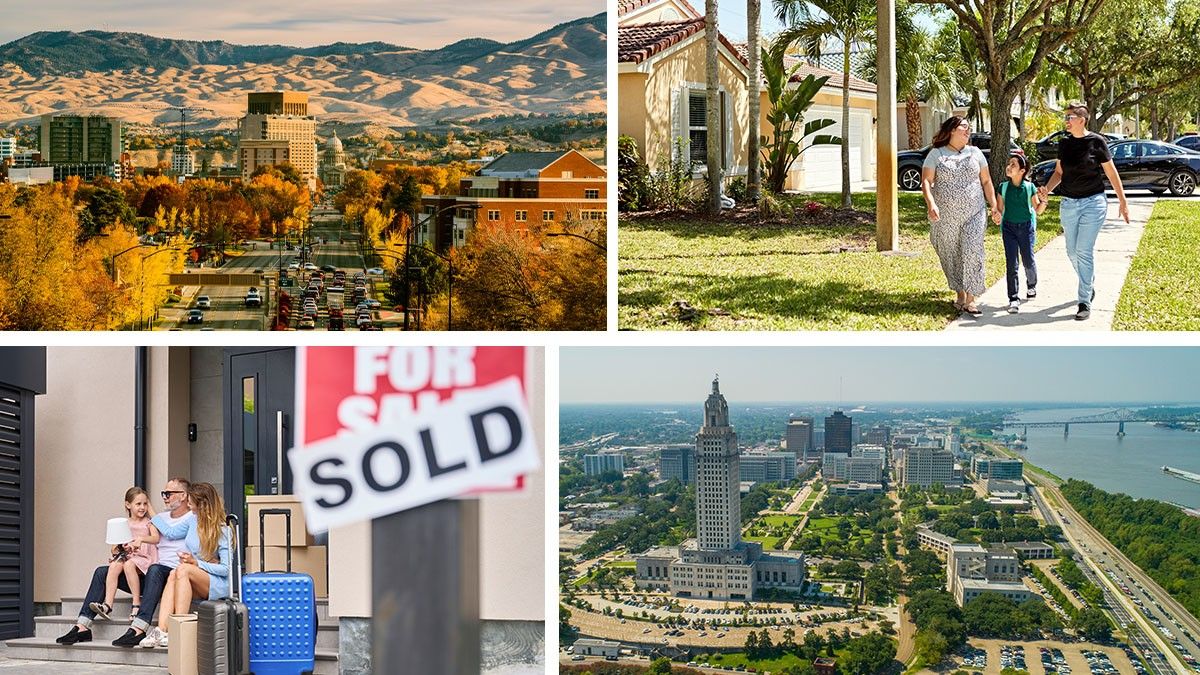 The housing market’s quick shift into a cooldown has many watching carefully to figure out what’s next. Will the latest uptick in mortgage interest rates bring home prices down? Will sellers be more open to negotiating? Will more homes finally go up for sale?

Trying to gain an advantage in 2022’s real estate market is a bit like trying to game the New York Stock Exchange: full of contradictory signals, dead ends, and lots and lots of guesswork. Home shoppers looking for the right location at the right price can feel overwhelmed trying to piece together which indicator can help guide them in the right direction. Price reductions? Increases in new listings? The time homes spend on the market? Each metric tells only part of the story.

But that’s what we’re for! The ambitious data team at Realtor.com® decided to put together a 2022 housing “theory of everything”—combining several of the most important indicators and metrics into a definitive single list of the best cities in America for homebuyers right now.

To come up with a “buyer’s bonanza” ranking, we analyzed housing data from the nation’s 250 largest cities. We looked at the price per square foot compared with the local median income (to ensure residents can afford to become homeowners); how many days a home spends on the market (to assess how quickly homes are selling and whether sellers might be ready to negotiate); the percentage of sellers cutting prices; and the amount of homes for sale relative to the total number of households in the city. This last metric makes sure bigger cities with more homes for sale given their size don’t skew the rankings.

Finally, we limited our list to just one city per state to ensure geographic diversity.

It turns out shoppers in certain parts of the country don’t need to wait for the national market to sort itself out—new opportunities to buy the right home are opening up fast.

“For some of these markets, it’s a return to balance especially where you saw lots of dramatic demand increases during the past couple of years,” says George Ratiu, manager of economic research for Realtor.com.

The best cities for home buyers aren’t clustered in one part of the country, either. These buyer-friendly markets are spread out, from the sunny Southwest to the Upper Midwest and back to the beaches of Florida. 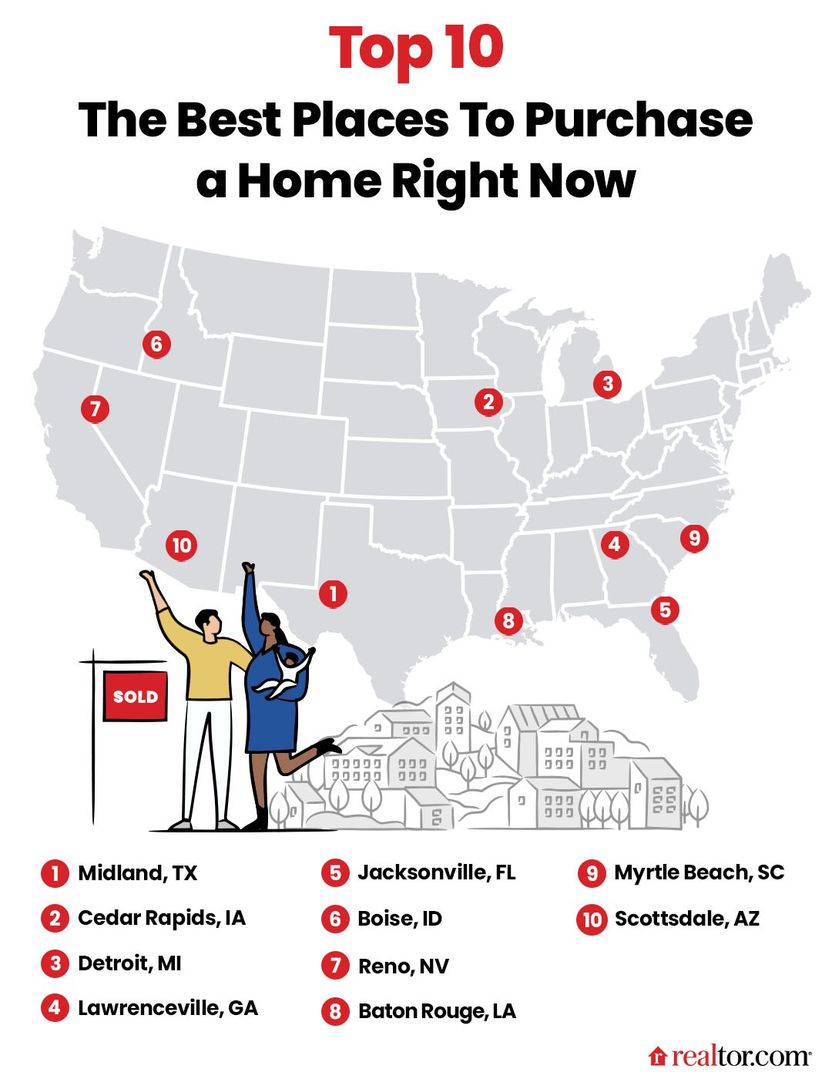 Midland earned its name for being the middle point between Dallas and El Paso, TX, on a long stretch of railroad. In fact, it was just “Midway Station” before it was ever a city.

But Midland earned its spot atop our “buyer’s bonanza” list because of its low home prices, high relative wages, and an abundance of homes for sale.

While the market in Midland has slowed in recent months, like most places across the country, it’s still moving briskly, says local broker associate Brian Sales, with The Sales Team Realtors.

Sales says he can see why Midland made the list. The area is a mecca for the oil and gas industry, and that’s brought lots of high-paying jobs.

“Geologists, engineers, chemists,” Sales rattles off. “These are well-paid scientists and experts.”

With homes no longer selling almost immediately, Sales says buyers have time to weigh their options.

“There’s definitely more of an attitude for buyers, like, ‘Hey, we have some time, we can think about it, we can absorb what we’re seeing, we can pray over it,’” he says. “Whereas a year ago, if you took the time to say a prayer over it, you might just lose it.”

Buyers in the city can still find a three-bedroom, one-bathroom house with a new wooden deck for under $100,000. Those with larger budgets looking for more space can nab this three-bedroom, 2.5-bath house with a deck, patio, and finished basement for $245,000.

The Motor City, once an automotive powerhouse, has struggled over the past few decades as plants have closed and workforces have dwindled. As more people left the city, there weren’t enough new ones moving in to keep the housing market strong. That’s resulted in Detroit having some of the most affordable real estate in the country.

The current inventory in Detroit is higher than it’s been for most of the past five years, except for a few months in late 2019. This provides buyers with plenty of choices—and they don’t have to rush to make a decision.

Another standout factor in Detroit is the median length of time listings have been on the market: a little under two months.

Lawrenceville is a relatively small town (population of 31,000) about 30 minutes northeast of Atlanta. The artsy suburb is known for its parks, the Aurora Theatre—which hosts hundreds of performances a year—as well as the School of the Arts at Central Gwinnet High School, which offers a conservatory and fellows program.

It made our list thanks to its relatively high local wages and relatively low home prices per square feet. However, what really stands out about Lawrenceville is the share of listings that have had their price reduced—a steep 42%—along with the bounce back in inventory. The number of homes for sale is back up to nearly normal levels for the area, after dipping in 2021 to less than a quarter of what’s available now.

Florida has many banner cities, but Jacksonville is the most populous—and the largest geographically. The city, at the eastern tip of the state, became especially hot during the COVID-19 pandemic as out-of-state buyers looking to soak up some sunshine descended, buying up local properties.

The area’s close proximity to the coast (the city sits on the St. John River where it empties into the Atlantic Ocean) and moderate climate made it an ideal location for those looking to escape the busy metropolitan hustle and take advantage of the new work-from-home lifestyle.

Prices in Jacksonville have been coming down since June, but are still well above anything before the pandemic began.

Buyers can find a cute, three-bedroom, one-bathroom house with a front porch for $225,575. They can also splurge on a renovated, 3,000-square-foot brick ranch with a lanai and pool in the backyard for $675,000.

Boise, like Jacksonville, was a popular destination for buyers during the pandemic. Its below-average prices and abundant active and outdoor lifestyle put it at the top of the list for shoppers who wanted someplace that has year-round quality of life, at a low cost. It was especially appealing to Californians seeking a more affordable lifestyle.

The influx of new residents led prices to soar—and builders to go on a local construction spree. The latter has helped to boost inventory at a time when there are fewer buyers in the market. The result is that more than half of all current listings have had their price reduced—more than any other city on this list.

“The combination of some inventory growth and some price reductions has caused buyers to pull back,” says Andrea Pettitt, a real estate agent at The Boise Group at Silvercreek Realty.

It’s worked out well for at least one of Pettitt’s clients, who she says is emblematic of buyers right now.

Patience appeared to have paid off. Pettitt’s client waited and was able to get a home in his price range—and he was able to pick from several on the market, instead of competing against other buyers.

Ratiu cautions that, while the market has taken a turn toward buyers, things could be getting even better for buyers in the coming months.

“A relative bargain in Boise might need an asterisk. There may be more room in those markets to have prices come down a bit,” he says.

Reno, sitting just on the east side of the California-Nevada border and less than an hour from the beautiful Lake Tahoe and all the boating, hiking, and skiing the area offers, was another pandemic hot spot.

In the past few months, though, Reno has had a lot of new homes come on the market and lots of price reductions.

Its appeal to pandemic-era buyers may have reached its end, putting it closer to where it was in 2018 and 2019.

“Reno saw a lot of inflow during the pandemic,” Ratiu says, “especially [San Francisco] Bay Area buyers dealing with social distancing requirements, and who were interested in the great outdoors and an almost vacation-like lifestyle.”

This two-bedroom, one-bathroom condo in a community with a pool is on the market for $245,000. Those looking for a single-family home can score this four-bedroom, three-bathroom house for $549,000.

Baton Rouge, an inland city about an hour and 15 minutes northwest of New Orleans, is home to Louisiana State University and is known for its Cajun and Creole culture and views of the Mississippi River.

A classic three-bedroom, two-bathroom, midcentury home, sitting on several acres of land with a barn/workshop, can still be snagged for $450,000 in this Southern city.

This longtime tourist destination and retiree favorite became even more popular during the pandemic as remote workers rushed to buy up homes near the beach. The coastal city, which Realtor.com recently named one of America’s most affordable beach towns, has golf courses, a boardwalk, an amusement park, and plenty of other activities.

“We’ve also seen younger buyers, millennials who now have kids, and they’re looking for family-friendly places to settle,” he says.

The expansion of Myrtle Beach’s port in recent years has opened the area up for new business, Ratiu adds, which has led to an overall economic boom there.

The beachside community offers buyers an abundance of single-family homes over 2,000 square feet that are walking distance to the Atlantic Ocean, for under $500,000. For example, this three-bedroom, two-bathroom house is on the market for $390,000.

Scottsdale, one of the state’s most popular golf and resort destinations also favored by retirees, made the list after the market largely returned to what local experts describe as “normal.”

“Buyers are definitely in a better position than six months ago,” says Tiffany Carlson-Richison, an associate broker with Realty One Group in Scottsdale. “There’s more opportunities, and it’s kind of the pick of the litter right now.”

Carlson-Richison says she was selling three houses per month just a few months ago, but now she’s back to around one per month.

Joseph Callaway, the owner of Callaway Realty in Scottsdale, says he prefers the market as it is now: “It’s more balanced.”

The early part of 2022 was like a fast run-up, he says, with prices up $80 per square foot in just a few months. But things have slowed down, and that’s good for buyers. Scottsdale’s prices have dropped 7% since the high in April, but inventory is still not back up to pre-pandemic levels.

“If you want to buy,” Callaway says, “you can look around. You can negotiate.”