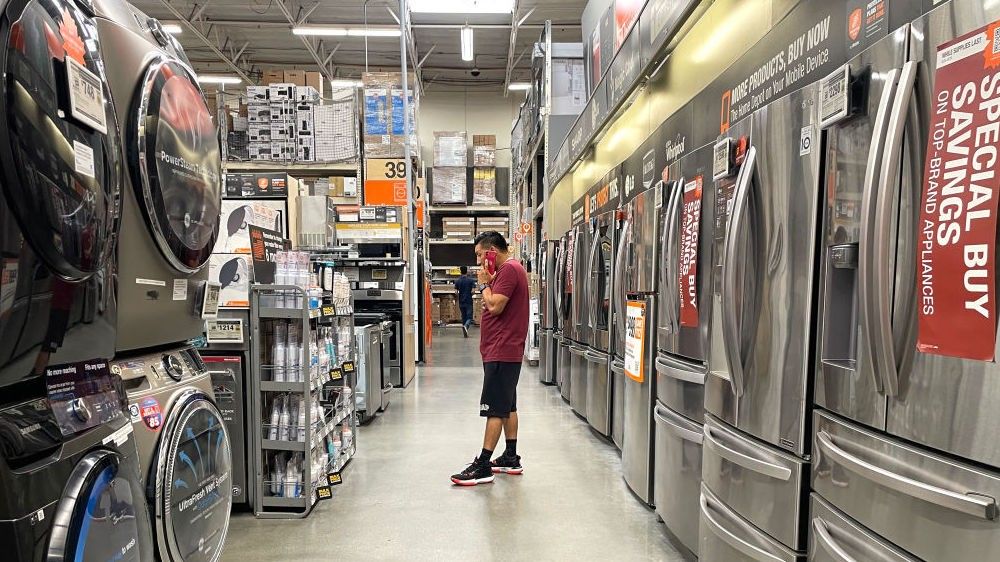 Falling home sales are rippling through the economy, providing a window into how rising interest rates can cool spending, hiring and growth.

When people buy new homes, they typically buy a lot to go inside, including furniture, curtains, lighting fixtures and appliances.

Such spending has slowed or fallen this year as many home buyers moved to the sidelines in the face of climbing interest rates and a shortage of homes to buy, according to government data and businesses.

Sales declined in August from a year before by a seasonally adjusted 1.6% at furniture and home-furnishing stores, and by 5.7% at electronics and appliance stores, according to the Commerce Department.

Furniture businesses have been cutting jobs in recent months, according to the Labor Department.

“It’s very bad if you’re involved in the housing market” or a retailer of the kind of products people purchase when they move into a new home, like appliances, said Ian Shepherdson, chief economist of Pantheon Macroeconomics. “All these things are triggered by transaction volumes, and I’m pretty confident that they’re all going to take a pounding,” he said.

This is bad for the sellers and their employees, but is exactly the domino effect the Federal Reserve expects when it raises borrowing costs to combat high inflation. The central bank has lifted its benchmark interest rate this year at the fastest pace since the early 1990s and is likely to lift it this week and in coming months to restrain spending, investment and hiring, hoping that will slow inflation.

Mortgage rates have soared in response. The average rate on a 30-year fixed-rate mortgage climbed to 6.02% last week, up from 2.86% a year ago, mortgage giant Freddie Mac reported Thursday.

U.S. existing home sales fell in July for the sixth straight month, the longest streak of declines in more than eight years. They dropped 20.2% from a year ago.

Inflation is proving stubborn so far. Although sales are down, prices for household furnishings and supplies–which includes furniture, bedding, curtains and carpets–rose 1.1% in August from July, the fastest monthly pace since January, and were 10.6% higher than a year before, according to the Labor Department. One exception in the category is appliances: Their prices fell in August from the prior month by the most in nearly two years.

More prices could decline or rise more slowly if the sales trends continue.

RH, the high-end furniture seller formerly known as Restoration Hardware, said this month that it expected its sales to keep falling at least through January because of housing-market weakness over the next several quarters, the Fed’s anticipated rate increases and the comparison with its record sales in 2021.

Some of the falling spending on goods related to home sales reflects factors other than the housing market. RH and other home-goods companies such as Wayfair Inc. and Williams-Sonoma Inc., owner of Pottery Barn and West Elm, have been facing a reversal of fortunes after the pandemic initially helped fuel increased spending on home furnishings.

A housing boom started in mid-2020 as buyers scrambled to find homes with more space, which helped drive purchases of items like sofas, rugs and house plants. Many consumers who started staying home more—canceling vacations and avoiding restaurants—saved money and decided to remodel and redecorate. Spending on home furnishings continued to soar through the end of 2021.

Now, many consumers are tapped out or shifting spending to groceries because of inflation, as well as to services they missed during the pandemic, like dining out. Meanwhile, retailers now have inventory gluts due to delayed orders arriving after the shoppers moved on.

“From when we reopened in 2020 to the end of 2021, business was going crazy good, you were selling everything you had,” said Jared Simon, owner of Simon’s Furniture, Mattresses & Appliances in Franklin, Mass.

Now, “most dealers are over-inventoried; our inventory is up 55% from pre-Covid levels,” he said.

Prices are starting to come down, he said, with manufacturers offering incentives like discounts for customers who buy a whole package of appliances, such as for a new kitchen—a trend he hasn’t seen since 2019.

Some consumers are trying to wait out the current period of high inflation, high borrowing costs and supply-chain issues. Nick Luczak recently moved to Dallas for a job as a business development associate, and he plans to wait for holiday deals to upgrade some of his appliances like a coffee maker, cellphone and air fryer.

“Until they break, there’s no need for me to buy one,” the 22-year-old recent college grad said. “I’m being smart about the way I purchase things.”

Residential investment accounts for roughly 4% of U.S. gross domestic product, according to the Commerce Department. The category includes the construction of new homes, improvements to existing ones, brokers’ commissions on property sales, and equipment built into residential structures like heating and air-conditioning units.

The multiplier effect is large, according to the National Association of Realtors, the main trade association for real-estate agents. It estimates that the real-estate industry and related consumer spending accounts for about 17% of GDP. That includes spending on lawn care, home remodeling, new furniture, mortgage origination, moving, and building new homes. News Corp, owner of The Wall Street Journal, also operates Realtor.com under license from the association.

Businesses connected to the property sector are coming off a strong couple of years. For the better part of the past 15 years, households paid very little to borrow.

Today, however, “if you have to borrow to buy the good, you’d expect higher rates to weigh” on spending, said Paul Ashworth of Capital Economics.