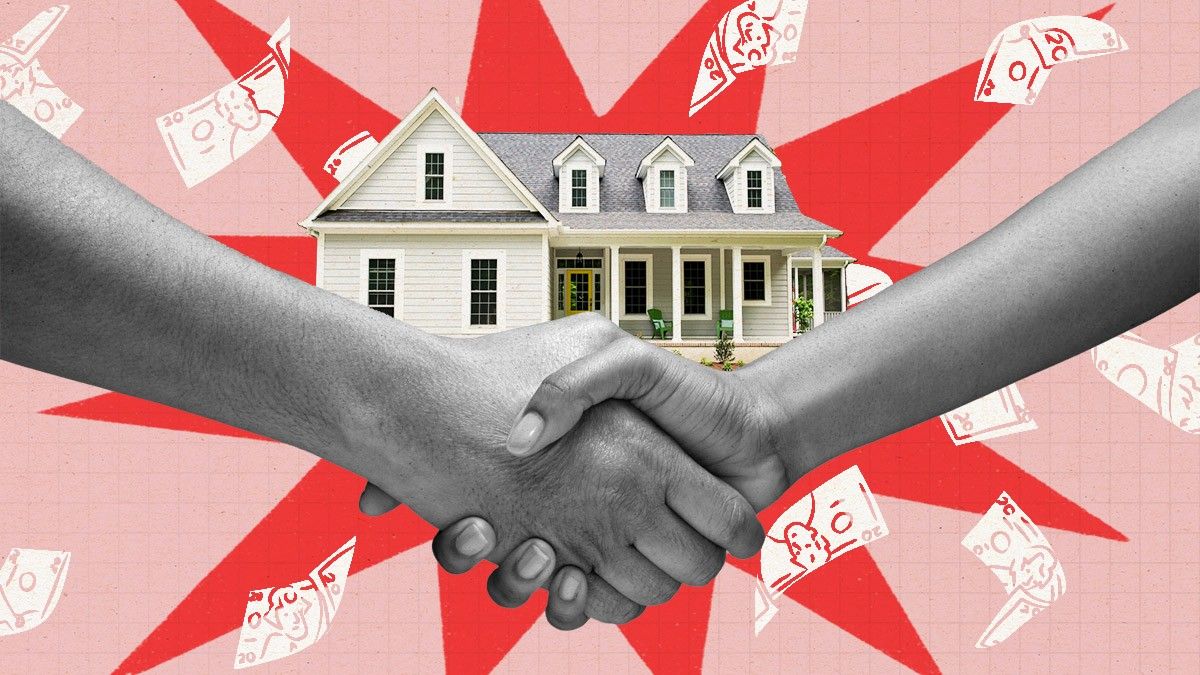 Everyone’s heard about how high interest rates are making once-affordable homes nearly impossible to pencil out. And with few homes for sale across the country, and prices still historically high—even if they are coming down a little bit—potential buyers have been in a rough spot for most of 2022.

But there are some metros that offer some hope for home shoppers—places where they might be able to submit a lowball offer under the seller’s asking price. These are cities where savvy home shoppers would be wise to put in an offer below the asking price, insist on contingencies like home inspections, and even negotiate other parts of the deal that could potentially save them some serious cash.

Yes, these places do exist—and the Realtor.com® data team found them.

The places on the list are marked by big price swings over the past few years—but sharp declines in demand in the past few months. Prices in these real estate markets appear to be out of sync with the new realities of higher mortgage rates—hovering around 7%—and fewer out-of-town buyers coming in with larger and all-cash offers. More homes in these metros are piling up as they’re up for sale longer. And with fewer buyers, many sellers have been slashing prices.

“I do see a mismatch in pricing with [mortgage] rate increases as part of that landscape,” says George Ratiu, a senior economist and manager of economic research at Realtor.com. “Yes, they are emerging markets with promising economies. Yes, they are popular for newcomers. But are they possibly overpriced, given local earnings? It seems so.”

Monthly payments are up hundreds or even thousands of dollars more because of the spike in mortgage rates. Prices will eventually have to reflect that reality. That’s why it often doesn’t hurt to make an offer below the list price on a home that has been sitting on the market for a while; sellers who need to sell may be amenable to a compromise.

To figure out where market conditions suggest sellers might be open to negotiations, we looked at several metrics for the 300 largest metropolitan areas. We identified areas that had above-average increases in the number of homes for sale; the number of days listings spend on the market; and the number of listings with price reductions. Then we ranked the areas based on where the median home price shot up the most over the past three years, but where prices have remained close to their peaks.

We selected one metro per state to ensure geographic diversity. Metros include the main city and surrounding towns, suburbs, and smaller urban areas. 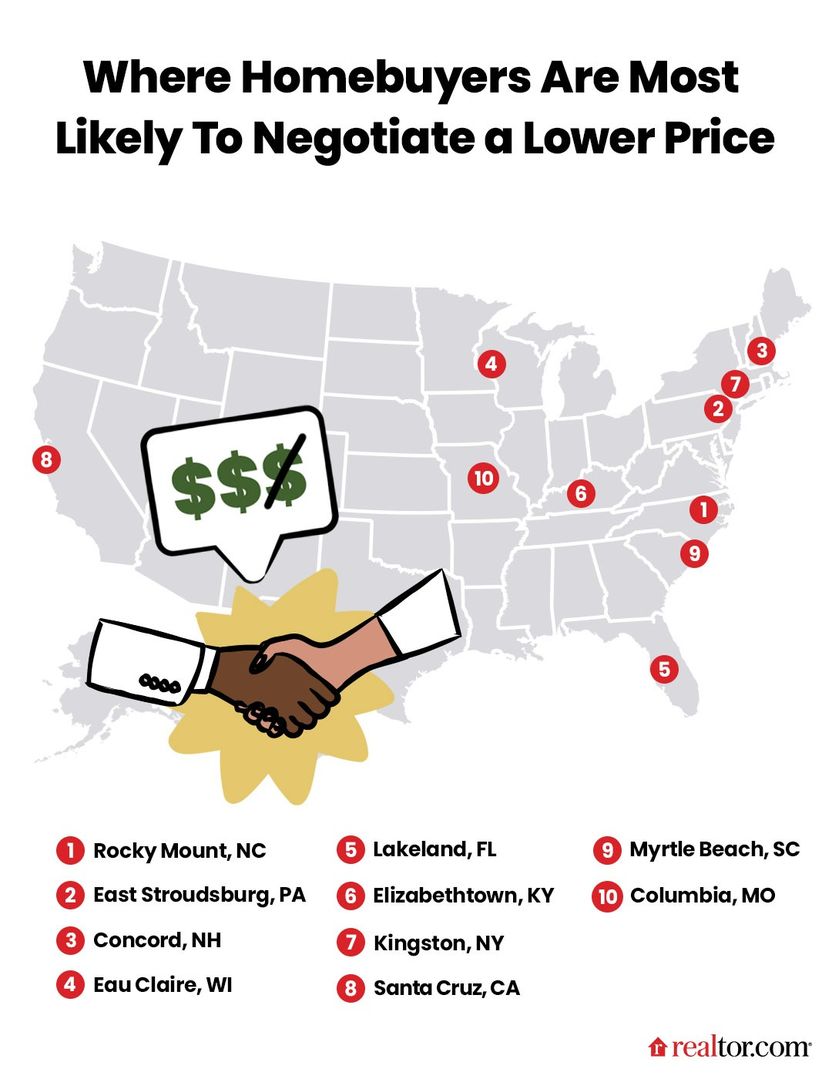 In the past few years, home prices have surged in Rocky Mount, a small city with growing biomedical pharmaceutical, manufacturing, and tech industries, about 45 miles east of Raleigh. The median home list price in the metro area more than doubled from $131,000 in October 2019, to a peak in September of $283,000, finally dipping a little in October.

Jay Hooks, a longtime real estate agent in the area with Moorefield Real Estate, says he’s never seen a surge in prices like this. And with the skyrocketing prices, came equally fever-pitched demand, he says.

“It was almost impossible to get a house on the market before you had an offer,” Hooks says.

Hooks says the area’s historically low price is what proved so attractive to people looking for more affordable housing during the COVID-19 pandemic. Many were able to work remotely at least part of the time. Prices are significantly lower than in the nearby Raleigh metro, where homes cost a median of $452,600 in October.

What that’s created, Hooks says, is an environment where sellers want to list for top dollar—even if that might not work to their advantage.

Hooks thinks the Rocky Mount market could see prices come down some, mostly due to the initial overpricing he sees. But the area’s proximity to Raleigh with a more rural lifestyle, should keep prices strong, he says.

More than half of those looking at Rocky Mount area homes on Realtor.com are from out of state, says Ratiu.

“So clearly a lot of outside dollars were driving those prices up,” he says.

The pandemic widened the commute radius for home shoppers who no longer had to go into their offices five days a week—or at all. That gave areas that might have previously been too far from a big urban center a boost as they became more realistic alternatives to the bigger, more expensive cities.

Enter East Stroudsburg, about an hour and fifteen minutes west of New York City, in the center of the Poconos. This idyllic and historic getaway for East Coasters looking for a mountain retreat, known for its lakes and skiing, became a residential possibility for New Yorkers who had the flexibility to work farther from Manhattan. Realtor.com named the metro one of the most affordable vacation destinations earlier this year.

Nearly two-thirds of interest in the market’s listings comes from outside Pennsylvania, says Ratiu. Meanwhile, just 11% of page views are coming from local home shoppers.

Home prices surged during the pandemic, from around $185,000 for the median home, to a peak of almost $350,000 earlier this year. That’s been tough on locals as the area has long struggled with higher unemployment than the national average.

Concord has been a popular destination for Bostonians looking for a city close enough to make easy trips to the city, while enjoying the benefits of living in New Hampshire—notably the low taxes and more affordable real estate. That helped the capital of New Hampshire climb to the top of the Realtor.com hottest markets list in June.

However, recently, more sellers have been reducing prices to attract buyers as homes are now sitting on the market for longer.

Pamela Young, a local real estate and broker with eXp Realty, says she’s seen buyers who are finding a lower-than-list-price offer is now a possibility.

Young says she’s put a strategy in place to help buyers find properties where the price can be negotiated down.

Straddling the Chippewa River, 90 minutes east of Minneapolis, Eau Claire is an artsy town and the self-proclaimed “horseradish capital of the world.” It’s also seen home prices rise quickly, like many other areas, over the course of the pandemic.

But in the six months between April and October, the portion of listings with a price reduction quadrupled. And the number of listings has doubled since February.

Alas, the median listing price is as high as it’s ever been. With prices beginning to drop between 5% and 10% in nearby Minneapolis, Racine, and Madison, Eau Claire could be poised to come down in response as buyers become more emboldened to ask for more discounts.

This updated, four-bedroom home on a corner lot has a remodeled kitchen with stainless appliances. Its asking price was recently reduced by $20,000, or about 8%, after four months on the market.

New construction isn’t immune to the trend, either. For example, this new three-bedroom home in southeast Eau Claire, which has been on the market for more than a year, has had its price come down multiple times. It’s now listed at $23,000 below the highest asking price in February.

Lakeland, named one of the best markets in 2019 for budget buyers and investors, became another popular pandemic destination.

The city, between Tampa and Orlando, saw prices increase from around $230,000 to nearly $370,000 in the past 2.5 years. However, the number of homes on the market in Lakeland has more than doubled in the past several months, introducing a lot of supply into the market quickly.

When there are more options for buyers, they have a lot more negotiating power. If one seller turns down a lower offer, they can move on to the next property.

In Lakeland, this large four-bedroom home on one-third of an acre was marked down $45,000—more than 10%—at the end of October, after two months on the market.

Prices have never been as high as right now in Elizabethtown, about 45 minutes south of Louisville. The median listing price in this next-door neighbor to the Fort Knox military installation has risen from around $200,000 two years ago, to around $315,000 in October.

In June, the median home was selling in less than three weeks. But as the market has cooled over the past few months, it’s taking closer to two months to sell, illustrating how demand has pulled back while interest rates have risen.

This three-bedroom home in need of renovation was pending sale only after two price reductions, adding up to $23,400 down from the original $143,400 asking price in July, or a 16.4% discount.

Kingston, a small city on the Hudson River, has exploded as a getaway destination in recent years. The area, about 100 miles north of New York City, has seen an influx of boutiques, high-end restaurants, and art galleries appealing to second-home and weekend getaway seekers from the city.

As a result, in just three years the median home price has gone from $320,000 to right around $500,000. However, fears of a recession and soaring mortgage rates are leading many would-be vacation-home buyers and investors to hit the pause button. And since many locals cannot afford these higher prices, sellers might be more open to accepting lower offers.

Even the uber-wealthy aren’t scooping up homes in Santa Cruz—an iconic, upscale California beach town on the northern tip of Monterey Bay—in the face of economic uncertainty and higher mortgage rates. As a result, the number of homes for sale has tripled since the beginning of the year.

At the same time, the number of listings that have been reduced has climbed from 1 in 10 to around 1 in 3.

“A lot of listings are just sitting there,” says Santa Cruz real estate agent Madani. “And they’re priced too high.”

He prefers to price homes low to drum up interest, which can lead to offers over the asking price. He recently listed a home for $650,000 that went on to sell for $780,000.

“Price it low enough to make it too good to be true,” he says.

Even in more affordable Myrtle Beach, the beachside South Carolina golf haven and longtime vacation and retirement destination, homes aren’t selling like they were just a few months ago.

The number of listings on the market has nearly tripled since earlier this year, while prices have plunged. They’re down about 5% from nearly $400,000 in March.

This midcentury, three-bedroom home within walking distance to the beach has seen its price reduced several times, finally landing at $375,000, after being listed in June for $450,000. That amounts to $75,000, or almost 17%, off the listing price from just six months earlier.

Even newly constructed homes for sale have been steeply discounted, including this brand-new, three-bedroom home that’s now listed for 15% off the asking price just two months after it went on the market.

Columbia, between Kansas City, MO, and St. Louis, may be best known as the home of the University of Missouri, the first university founded west of the Mississippi River. But it’s getting a reputation for its fast-rising home prices.

List prices in the fourth-largest city in Missouri spiked from $230,000 just before the COVID-19 pandemic began, to now nearly $350,000. And that’s despite the typical home now sitting on the market for the longest time in two years.

Now with the number of homes for sale more than double what it was in early 2022, the area could be ripe for offers below the recent peaks.

For home shoppers in Columbia, discounts are already easy to find. They include the $20,000 price reduction on this classically styled three-bedroom home near the Bonne View Nature Sanctuary, and the $30,000 discount on this brand-new three-bedroom home on the outskirts of Columbia’s city limits, whose price was reduced just weeks after being listed.

* Median list prices are as of October using Realtor.com data.