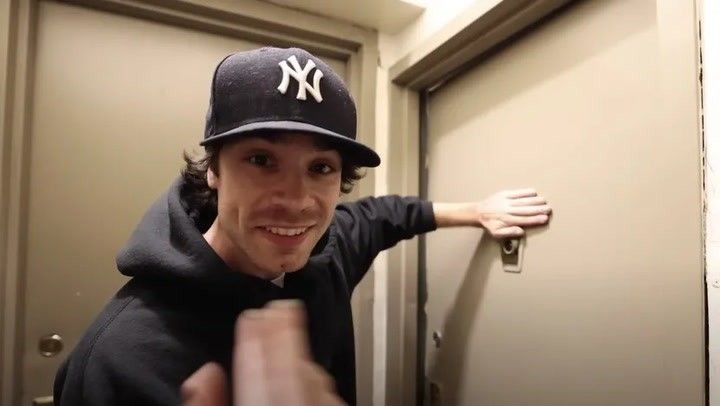 Caleb Simpson has become the internet’s favorite real estate looky-loo based on the millions of views his viral video series of apartment and home tours has racked up. But instead of filming formal open houses, the New York City–based content creator stops strangers on the street and persuades them to invite him inside their living space and open up about how much they pay in rent.

He’s had his camera rolling to check out more than 200 properties that range in size and price. The cheapest so far? A rent-controlled apartment in downtown Manhattan that goes for $350 a month. Then there’s the most expensive: a $10 million property that real estate mogul and “Shark Tank” star Barbara Corcoran owns.

“I like to call it this generation’s ‘MTV Cribs,’” Simpson says.

As he hits the road in December to film abodes in Los Angeles, Miami, San Francisco, and abroad, Simpson took time from touring to give us his insider take on what renting New York City real estate is really like, and what our personal spaces say about us.

In your videos, you begin by asking strangers on the street, ‘How much do you pay in rent?’ How do you convince them to share this private info, then give you a tour of their apartment on the spot?

When I first started, people didn’t really want to give away that information. But in New York City specifically, when you’re going over to a friend’s apartment, the first thing you ask is, “How much do you pay for this place?” Whether I run into someone on the street and we go do it right then or someone reaches out, I just show up at their home and I’m outside their door and I’m already filming. It’s very spontaneous.

You’ve toured over 200 New York City apartments, including Barbara Corcoran’s. How did that come about?

She shot me a DM; she reached out, which was pretty inspirational to see. She’s built so many amazing things in this world, and the fact that she still wants to be a part of things and show off her space, it was pretty cool.

Of all the homes you’ve toured, which stand out?

There’s a former laundromat that this guy Sampson lives inside. He decorated it like an art gallery. It’s a ridiculous, fascinating place—the most interesting one I’ve seen. I’ve been inside [homes made from] an ambulance, a converted van, a tour bus, and then just a lot of really small apartments that are, like, 200 square feet, and that’s always shocking.

I actually traded apartments with somebody who lives inside a 200-square-foot apartment. I was like, “Hey, let’s trade apartments so I can see what it’s like to live in here,” and we made a video about it. And it is difficult.

Which tenant’s story has been the most inspirational?

One person, J.R., has this tiny apartment that he pays, like, $689 for a month. He was just so grateful for his space and being able to come to New York. He found it [online], and it had a blurry picture. He just moved here; he drove a truck up from down South and just hoped it was a thing because he couldn’t afford more. He was just so energetic and positive and happy to be in New York City, to be able to experience it—and just the amount of joy and energy he had toward the world was a true reminder to me to always be grateful and thankful for what I have.

Turning the tables, how much do you pay in rent and what would we see on a tour of your apartment?

My apartment costs $7,000 a month. I have roommates, so I pay $2,000 for my share. My apartment is a gem. We have two outdoor spaces [and] a huge bathroom. The roof deck is the real highlight for me. When I first moved to New York City, I always said if I can walk outside and not be bothered by New York, then I’ve made it, and I can do that now.

Filming the inside of celebrities’ refrigerators was a hallmark of ‘MTV Cribs.’ What’s your signature move?

Trying out people’s beds. When I started doing the tours, I was like, “What’s the most ridiculous thing I can do in someone’s home?” It’s either take a shower or try out their bed. Sometimes I get a no, but a lot of times people see it coming so they’re mentally prepared.

Why is it so intriguing to get such an intimate peek inside someone’s home?

We’re all a bit curious. At first, people were more interested in the price point, but [more recently] someone commented, “I love how you’re highlighting all these humans, and we get to see how people live and what they care about in this world.” I think that’s what the series has really come to, highlighting a human and their life.

Do you think these videos can help people trying to find an apartment in New York?

The more neighborhoods I explore, the more people are getting to see, “Oh, you only pay two grand and you have three bedrooms?” I think it just opens up a wider conversation about what’s out there.

Which New York City neighborhood has the coolest places to live?

I’m going to get in trouble for this answer no matter what I say, [but] the Upper West Side is underrated and I really love going [there].

You can find almost any item you’ve ever wanted, especially on the higher end, for cheap because people will buy a $10,000 couch and put it on the 10th floor of a building, and then when they move out they’re like, “I don’t want to deal with this. Can someone just come and deal with this for me?” And you can talk them down to half off or lower.

How expensive it is. People have to sacrifice and make choices to live in New York, either having roommates or living really far away. Also, there’s a lot of empty apartments that people could fill but because everybody’s [out] just trying to make money, they leave them empty.

Which celebrities are on your wish list to film home tours with?

What location, real or fictional, would be your dream tour?

Whenever the first home is put on the moon or Mars, I’m going to be the first person to tour them.

The post ‘How Much Do You Pay for Rent?’ What TikTok Star Caleb Simpson Learned Touring 200-Plus Apartments appeared first on Real Estate News & Insights | realtor.com®.